In a move seemingly designed expressly to cater to fans of the How Did This Get Made? podcast, Mill Creek Entertainment recently released B-movie auteur Andy Sidaris’ 1987 action classic Hard Ticket to Hawaii on Blu-ray. In a just world, this should be the disc release of the year.

Big hair, fake tits, and tepid gunplay are the order of the day in the oeuvre of Andy Sidaris, a former TV journeyman who’d spent decades toiling away at sports programming (and even won an Emmy for coverage of the 1968 Olympics) until the home video revolution of the 1980s gave him an opportunity to live out his dreams of being an action movie director. Honing in on a simple but effective formula he succinctly dubbed Bullets, Bombs, and Babes, Sidaris’ movies were very cheap, nonsensical, and borderline incompetent, but have a purity of purpose and a spark of demented genius that cannot be denied.

Hard Ticket to Hawaii wastes little time letting you know exactly what kind of movie it’s going to be. A buxom starlet (the first of many) takes her top off to flash her silicone-inflated boobs at exactly 1 minute 35 seconds into the running time. The excuse for doing this is almost as weak as her acting skills.

The plot, what there is of it, mostly centers around Donna (Playboy Playmate Dona Speir), a DEA agent working undercover in Hawaii as a cargo plane pilot while she’s assigned to guard a Witness Protection informant named Taryn (Hope Marie Carlton, also a Playmate) who’s obsessed with spy movies. While ferrying tourists around the islands – and no, it’s never explained why these cargo pilots also seem to be tourist guides – the two accidentally stumble upon a diamond and/or drug smuggling operation run by evil British millionaire Mr. Chang (Peter Bromilow, a character actor who’s been in real movies including Wild at Heart and The Rocketeer). After a quick dip in the jacuzzi to put their thinking caps on and take their bikini tops off, Donna and Taryn call in reinforcements, in the form of super-stud DEA agent Rowdy Abilene (The Bold and the Beautiful star Ronn Moss) and his shirtless buddy Jade (Harold Diamond, an accomplished thespian who essayed the important role of “Stick Fighter” in Rambo III). Together, this group must not only take down the bad guys, but also contend with a dangerous “contaminated” snake that’s on its own, unrelated kill spree. Because of course that’s the sort of thing you’d call the DEA in for. 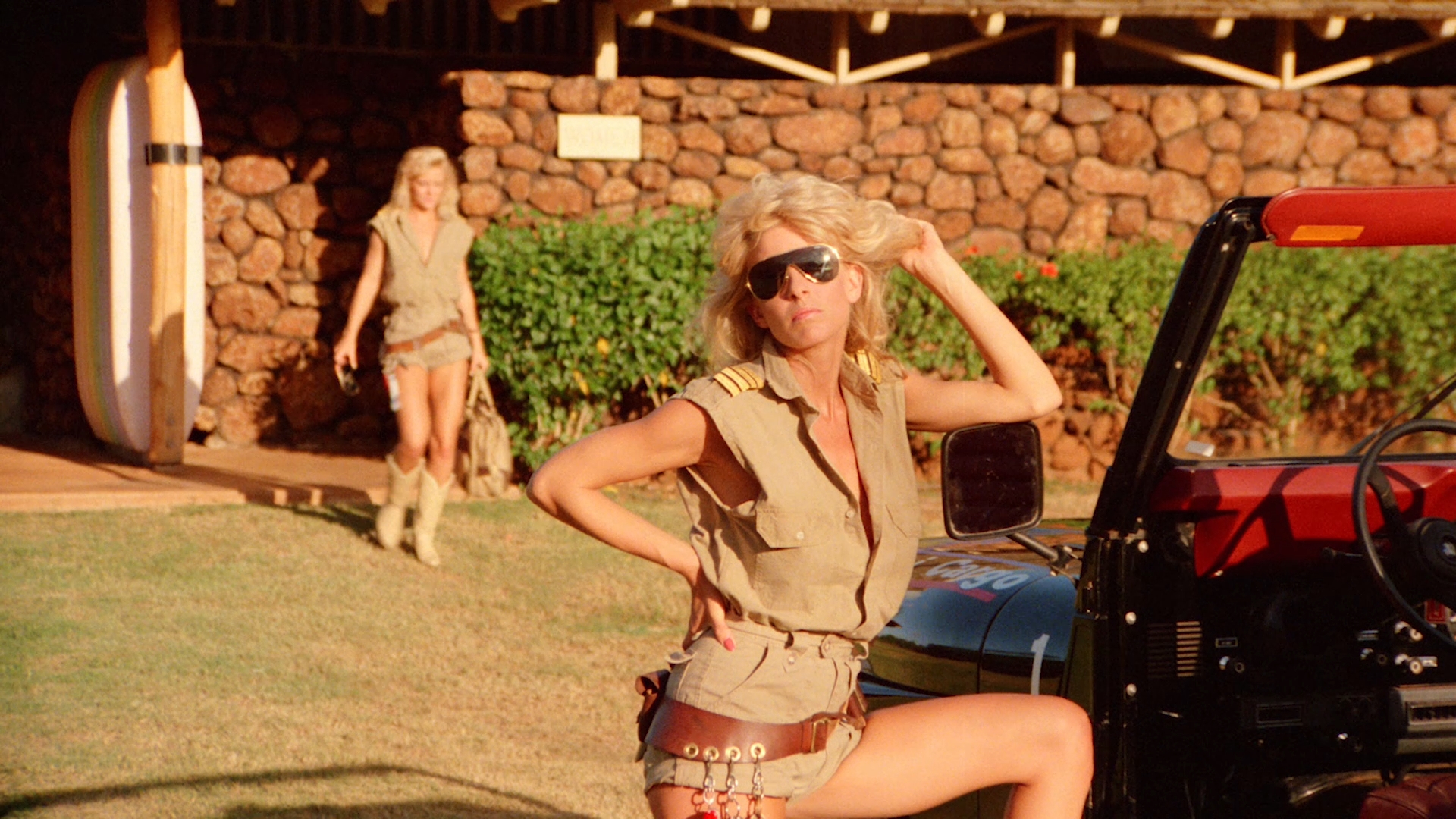 What follows are 96 minutes of atrocious acting, moronic dialogue, embarrassing production values, slack pacing, casual racism, gross sexism, and even a little transphobia. These are interspersed with lots more skeevy nudity and sex, plus action scenes involving dirt bike chases, karate chopping, nunchucks, throwing stars, an ultralight glider, and quote-unquote actors waving around prop guns they clearly don’t know how to hold properly. It’s the worst and also the best of the 1980s all in one package.

If none of that sells the movie to you (and it should, frankly), Sidaris really goes for broke with a couple of bonkers set-pieces that are guaranteed to leave you howling with laughter and delight. The most famous, which incorporates an upside-down skateboarder, a blow-up sex doll, and a rocket launcher, is staggering in its conception and execution. Nearly as good is a later scene culminating with killer game of Frisbee. The amount of cocaine that must have been consumed just to dream up these scenes, much less to enact them in live-action, defies comprehension.

Hold no illusions about it. Andy Sidaris made trashy, idiotic movies and Hard Ticket to Hawaii is, objectively, terrible on every level. It’s also kind of amazing. 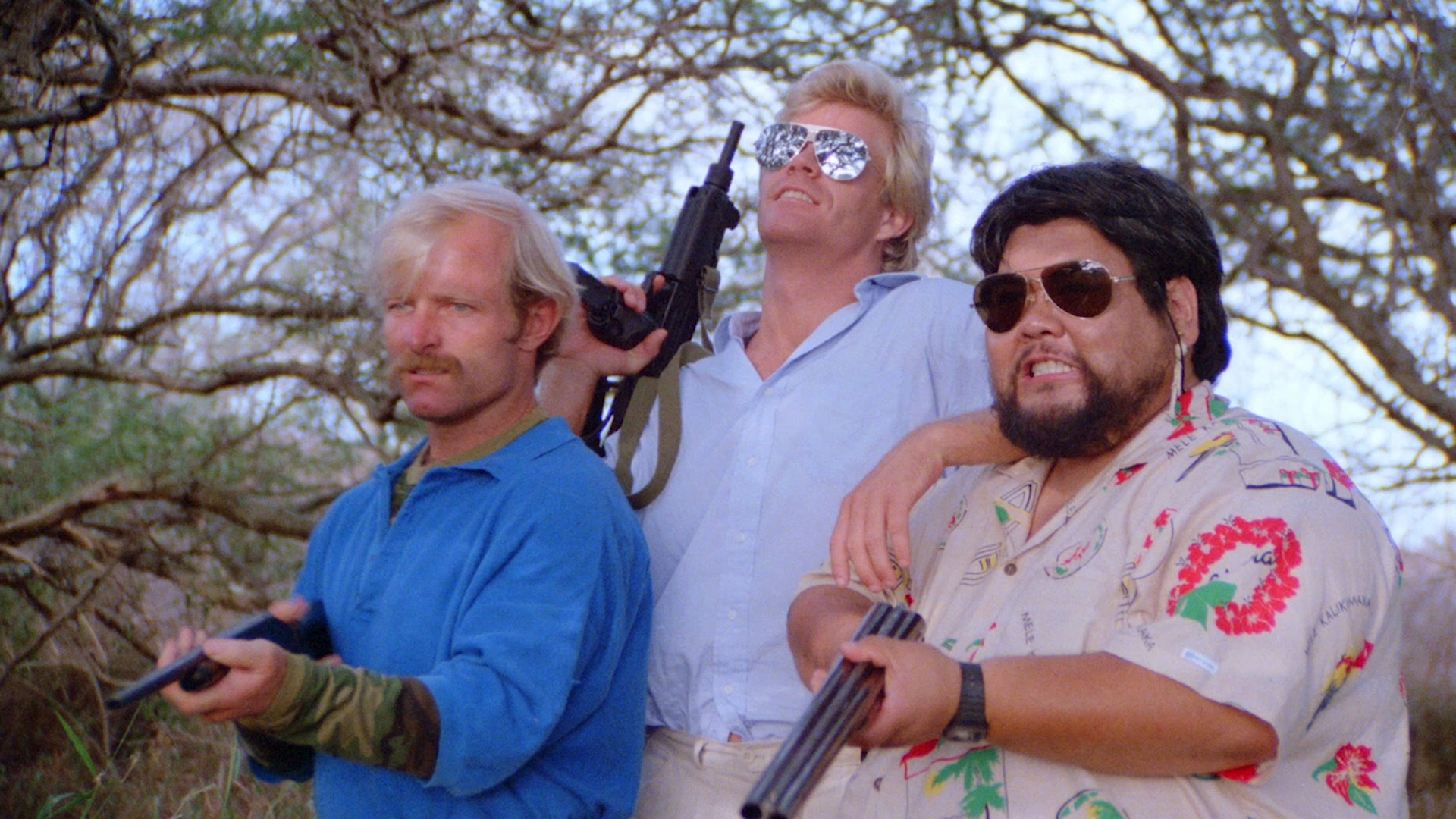 I have no idea whether Hard Ticket to Hawaii ever actually played in a movie theater. Undoubtedly, its primary intended venue was VHS rentals. To that end, even the cheap and over-compressed DVDs from 18 years ago or the rips you can find on YouTube, crappy as they may be, are already better quality than the original audience could have hoped to see. Nevertheless, Mill Creek has gone the extra mile by offering an “All new 4K film transfer and HD restoration!” (Yes, that exclamation point is included in the quote on the marketing materials.) What an embarrassment of riches!

I’m sure that the 16:9 image (presumably matted from full-frame 4:3) is leagues better than any previous copy of the film. At the very least, it’s pretty sharp and genuinely has an HD level of detail beneath all the heavy grain. Unfortunately, that’s not to say that it actually looks any good. The picture is far too bright and washed-out, with blown-out contrasts that clip white details. While it’s true that the movie was always a sloppy affair with lousy photography, I’m not confident that all the problems can be chalked up to the original production. The contrast boost looks electronic in nature to me. 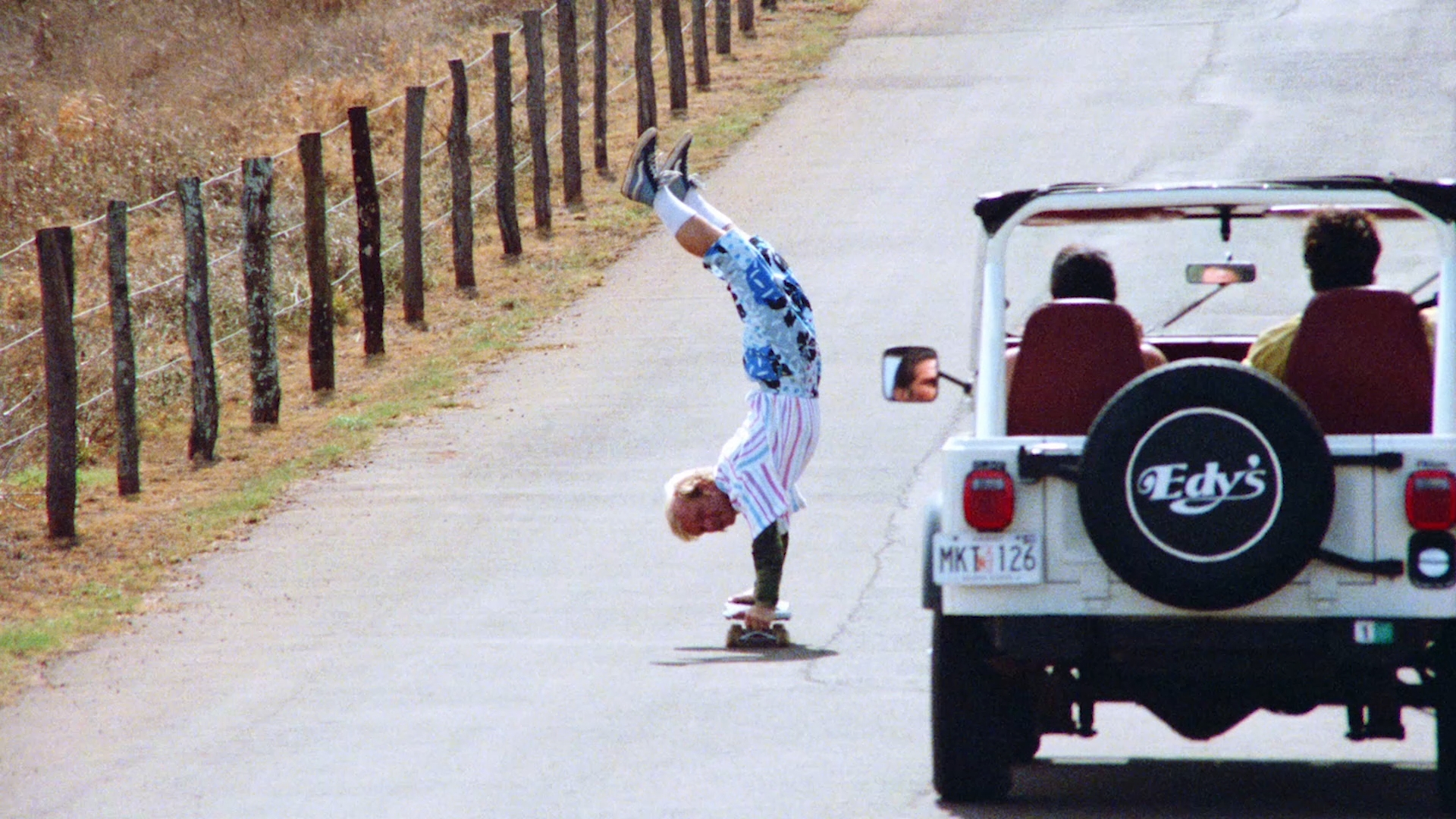 The awful DTS-HD Master Audio 2.0 soundtrack, on the other hand, is more likely to be the fault of poor recording and mixing. It’s harsh and strident, and basically sounds like listening to an aging VHS tape.

Bonus features include a director intro, an audio commentary, a behind-the-scenes featurette, and some trailers for other Sidaris productions. All were carried over from DVD. (Sidaris himself died in 2007.)

Also available simultaneously is a Blu-ray edition of Sidaris’ 1985 Malibu Express, the first feature in his BBB series. Picasso Trigger (1988) and Savage Beach (1989) are scheduled for release in July. 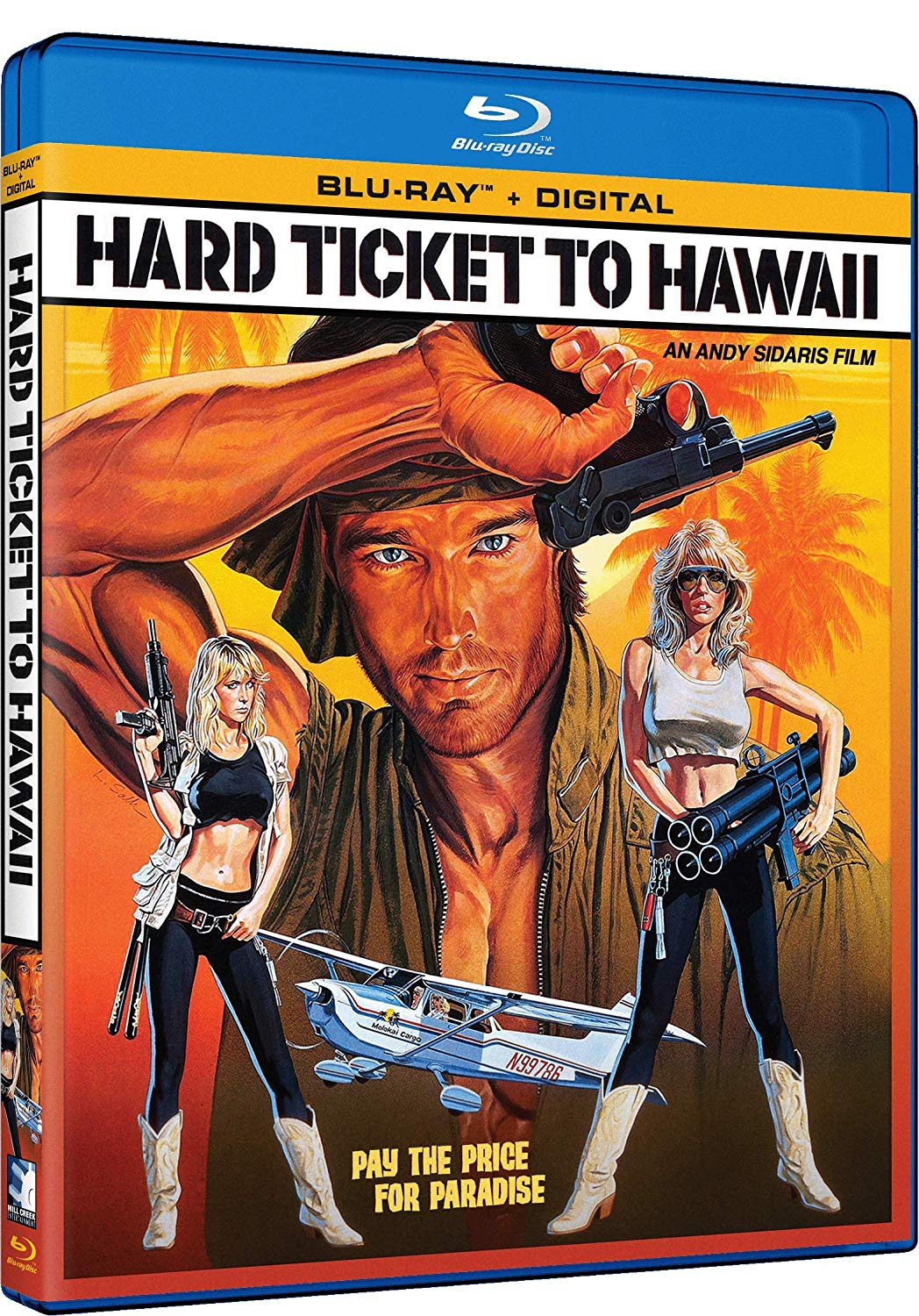