Over the July 4th holiday, I thought that it would be a good idea to try to get my dad to play ‘Civilization V’. What follows is roughly equal to an hour of ‘Blood, Germs, and Steel’. Or, in this case, “Fail, fail and fail again.”

My dad is not a gamer. I think that “game-challenged” would be an apt description. When I was a kid, he enjoyed playing ‘Tetris’ on my Game Boy. The only videogame since then to really interest him is the Hasbro-made 1996 version of ‘Risk’ for the PC, which he plays a lot. Having reached an age where utilizing patience is less than routine, it’s tricky to get him to play anything else. My last attempts involved playing cooperatively through half of the first ‘Resistance’, and supervising him as he played the tutorial section of ‘Half-Life’ on the PC.

Stubbornly, I decided to supervise him as he played the ‘Civilization V: Gods & Kings’ demo (available on Steam) on PC. That was my plan. Despite really enjoying ‘Civilization IV’, I had avoided ‘Civilization V’. This would hopefully allow me to be patient and not just tell my dad what to do over and over again. Likewise, I could share the perspective of not knowing exactly what to do, and thereby gauge how easy or confusing the interface and game systems came off to a new player. I further reasoned that the best to way supervise during this family visit was to hook-up my overgrown netbook of a computer to my dad’s 40″ Bravia TV. (I used HDMI, only to quickly realize that I would have to connect the audio out of the TV to the receiver.) My thinking here was that my dad would be playing with the closeness of a PC screen, keyboard and mouse (a must for strategy games), while I could follow on the TV. In theory, this should have worked flawlessly. 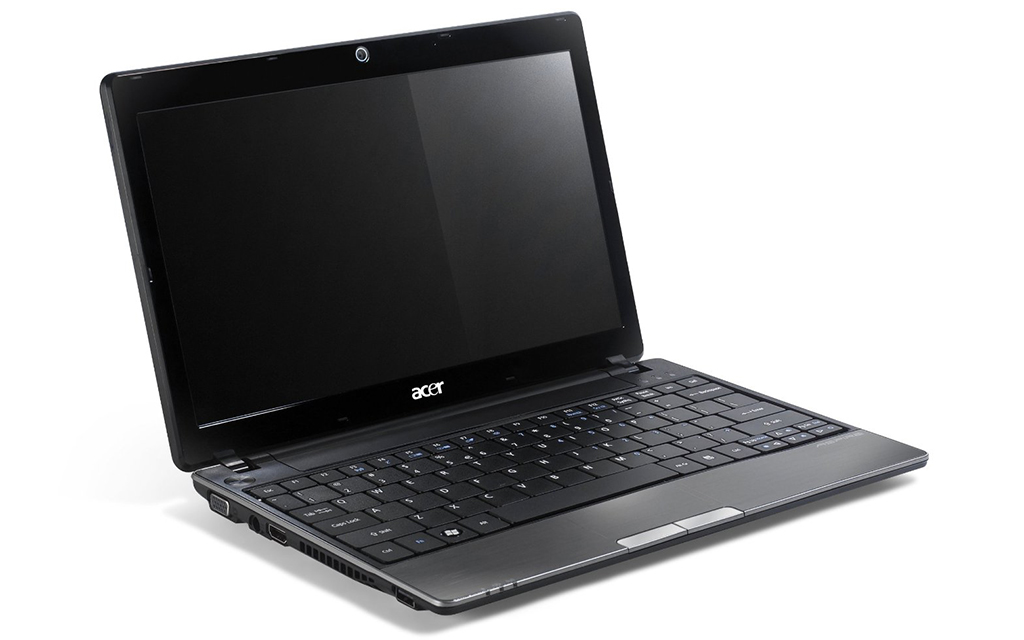 Part I: The Hour Begins

Ideally, whenever you give a multimedia presentation, you should carefully run through your visual aids to fetter out any potential problems. Othewise, you wing it and pray for the best. So, I prayed for the best while my dad waited expectantly for the game to load up. My little 11.6″ Acer netbook/laptop is close to two years-old and not a gaming powerhouse. However, neither is it a slouch. With its 4GB of RAM, 1.5 GHz dual core AMD and Radeon HD 4225 video card, it can run many modern PC games, albeit with the games’ settings turned way down.

Having not used the computer for one day, Steam had to update itself. After watching and waiting for the progress bar to finish, the game was finally ready to start. Well, sort of ready. Clicking the game lead to Steam’s ever-mysterious installation and loading. Finally, a ‘Civilization V’ box appeared, asking whether we wanted to play in Direct X 9, 10, or 11. (For the record, I chose 9 hoping for reliability and compatibility.) The screens went black, and after a time, the intro video started.

After a few seconds of narration, I gave up hoping that the intro would ignite fascination. My dad clicked past it at my behest. This brought on a static loading screen. At this point, I had no idea what to expect. It’s quite common to launch a PC game for the first time only to have to change a setting or two and re-launch. Something of upwards of ten minutes (it felt like hours) went by with that loading screen filling my two-screen set-up. I could see my father’s interest level reaching critically low levels, and the project was in instant peril.

Fortunately, the game was not all painful in its start-up. It automatically picked settings that allowed it to run without having to quit. Unfortunately, when I quickly checked to see that the game had some settings appropriate to my little Acer, I failed to notice the options for quick combat and quick movement. Still, the streamlined menu had a Play Now option. I had hoped that the demo would limit the scope such that we could get to gameplay without getting caught up in the set-up. Knowing my dad, a choice of civilizations would quickly have turned into a lecture about British tactics at Trafalgar or Waterloo.

Now the game begins. It begins with a loading screen where a narrator attempts to describe Boudicca, leader of a new faction, the Celts for ‘Gods & Kings’, and the player’s civilization in the demo.

The demo begins like any ‘Civilization’ match with the founding of the first city, the capital city – in this case, Edinburg. Being new to the game/demo, helpful pop-ups featuring ‘Civilization’ advisors appear in the upper right of the screen to describe new unit types or turn phases. In order to dismiss the advisor, you just need to click the “Thank You” button. At no point during this session did my dad click the “Thank You” button to dismiss an advisor without my repeated urging. Neither did we ever get close to founding a second city, which is pretty key to playing the game.

Another important aspect of the beginning of a ‘Civilization’ game is not having anything to do. You begin with two units: a settler and a warrior. The settler is consumed immediately when you establish that first city, and the warrior unit is left to explore and defend. The warrior (like most units) can only move one grid square (hexagon), and exploring the “fog of war” can necessitate serious backtracking. This makes for turn after turn of barely recognizable progress. One is left with the impression that early life in a given civilization sucks big time, and progress comes centuries after you and your family have turned to dust. Attempting to explain to my dad, who played the board games where these rules originated years ago, and who plays ‘Risk’ all the time, about moving once per turn and the fog of war, was met with eyes glazed over as if each word I spoke just pushed him further and further away from this planet.

As we sailed the U.S.S. Failboat deeper into waters where success has never been realized, it became clear that simultaneously rendering the game on two screens was taxing the little Acer. Zooming out at all caused huge render errors that looked like the map was being flooded Biblically, only to recede unreassuredly. My dad was not using the computers monitor, preferring to look at the TV screen and strain his eyes. “I need this set-up for Risk” was the affirmation he spoke. Capitulating, I toggled the Acer to display on the TV only, and marveled that the game did not crash instantly.

Suddenly, barbarian units began appearing. I recalled how annoying they were in ‘Civilization IV’, threatening your society while providing little reward for dispatching them. ‘Civ V’ does reward your units with experience and with gold, but at a cost of constantly spawning barbarians and barbarian encampments. Trying to fight barbarians, which my dad fixated on as being the closest approximation to playing ‘Risk’, quickly revealed how easy it was to incorrectly direct a unit’s movements.

As much as I know my dad is quicker to click the mouse than understand why such a thing would happen, I also now know that ‘Civ V’ has some funny (poorly executed) collision detection that exacerbates this problem. The Acer’s tendency to chug with slowdown with every additional unit on screen also made giving orders tricky, and I frequently worried that the game would break.

Part IV: Waiting for the Barbarians

Nearly 100 turns through the game, and we had yet to find an enemy civilization’s borders. A few of the computer’s scouts had wandered by, but the diplomacy screen was quickly dismissed and all efforts turned to locating and eliminating barbarians. The policy adoption screen popped up, and my dad was annoyed. “I already adopted a policy.” This must have happened when I stepped away for a few seconds, which is telling for how long my dad must have considered it before he clicked “Liberty.”

The technology tree had already been clicked away enough times for me to suspect that something was amiss. I asked him to wait for a moment so that I could review all the different policies and their associated stat bonuses, and my dad continued to say that he had already picked a policy. I relented, and he clicked another policy in the Liberty tree. The sad thing, as I learned later, is that the first node in the Honor policy tree allows you to detect the barbarians’ encampments as they spawn. 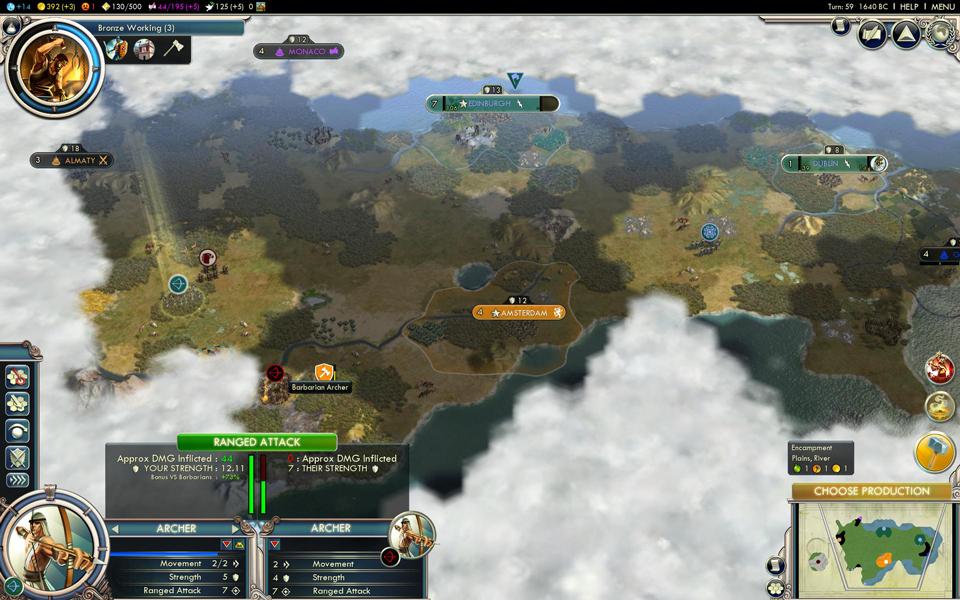 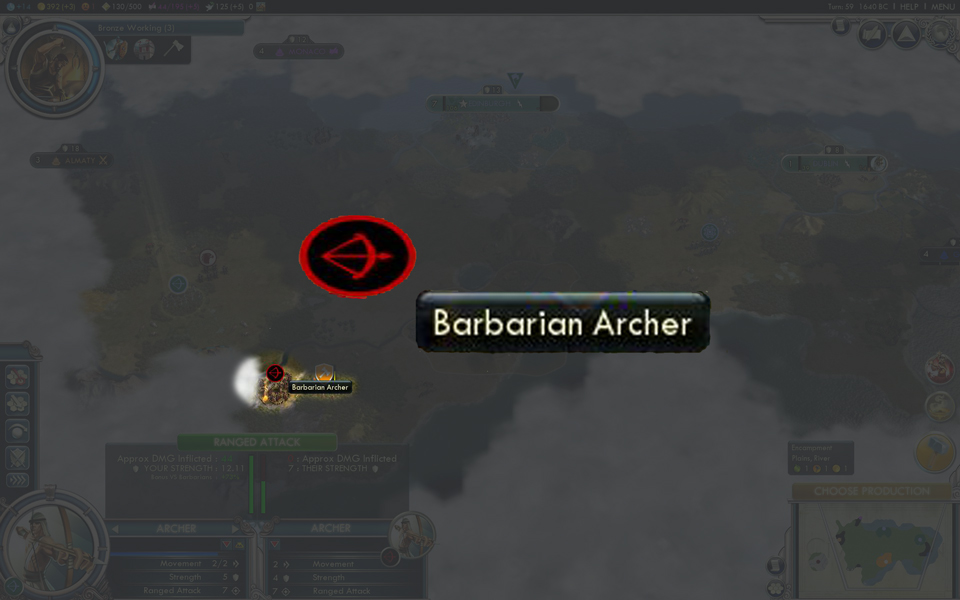 How my dad sees ‘Civilization V’.

“We did not fight the enemy. We fought ourselves, and the enemy was not us.”

Ultimately, just as yet another barbarian was ready to be crushed for trying to threaten our society, my Acer hit its 100°C cut-off and the computer immediately powered down, leaving me well aware that there is not a save feature in the demo. Hell, it was time for dinner anyway. Yet another civilization is crushed by impatience, heat and the dinner bell.

For the record, the futility was good family fun, and I ended up replaying the demo later that evening until once again the Acer quit before I was ready.