This is the sort of week where I have very little good to say about the new Blu-ray releases. Unfortunately, we’re going to hold a contest later today to give one of them away, so I should probably tone down my snark a little. Do you think I can manage it?

If I were you, I wouldn’t hold my breath.

‘Transcendence‘ – Johnny Depp remakes ‘The Lawnmower Man’ in the directorial debut of Christopher Nolan’s cinematographer, Wally Pfister. The trailers looked… well, not very good, and the reviews were unkind. You’d think that cinematographers would make a natural transition to directing, but most who’ve attempted it have had mixed results at best. Barry Sonnenfeld is perhaps the most successful example, and even he’s made more turkeys than good movies.

‘Sabotage‘ – Prophetically titled, Arnold Schwarzenegger’s latest flop (his third in a row since returning to acting) may signal doom for his comeback attempt. In this action thriller directed by David Ayer (‘End of Watch’) and scripted by Skip Woods (‘A Good Day to Die Hard’), Arnold plays the head of a DEA task force targeted for revenge by a drug cartel. From what I hear, every other word in the screenplay is “fuck,” “fucking” or “motherfucker” – which is hack screenwriter shorthand to indicate what tough guys the characters must be. The fucking movie fucking looks fucking awful.

‘Heaven Is for Real‘ – A little boy has a near death experience. When he wakes up in the hospital, he tells his parents that he went to Heaven and saw Jesus riding a rainbow-colored unicorn. Everyone who hears his story takes the boy absolutely seriously and hails him as a prophet delivering incontrovertible proof of God’s existence. This really happened, and now there’s a movie about it, and I’m biting my tongue so hard as I write this that blood is streaming down my chin. I will refrain from further comment before I need stitches.

‘Dom Hemingway‘ – I quite enjoyed director Richard Shepard’s hitman comedy ‘The Matador‘, and was saddened when his new feature received a lot of vicious reviews. It was perhaps a mistake for an American director to attempt to make a British gangster movie. It probably didn’t help that Jude Law looks like a cartoon character, and the following publicity photo is a nauseatingly grotesque use of teal-and-orange. Fair or not, that alone puts me off the movie. 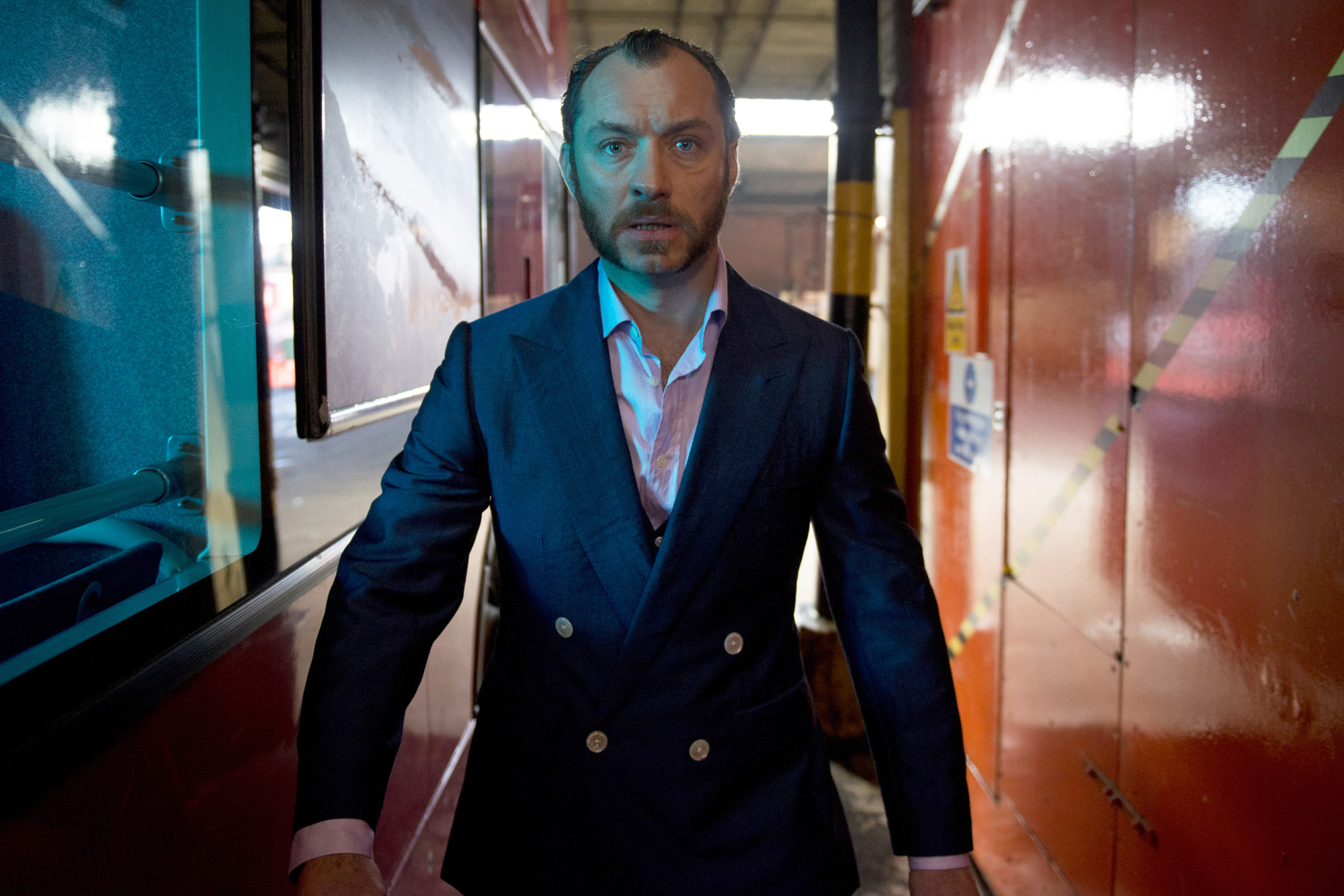 ‘GMO OMG‘ – Farmers and ranchers have practiced genetic modification of crops and livestock for centuries by way of selective breeding and fertilization. Of course, as soon as modern science attempted to speed up the process, people absolutely freaked out about it. Now we have so-called “activist documentaries” like this one fanning the anti-science flames. I believe that there’s a real conversation to be had about genetic modification of our food, but I don’t trust an annoying hipster who fancies himself the Certified Organic Michael Moore to provide a balanced view on the issue.

‘Blue Ruin‘ – Indie revenge thriller starring no one you’ve ever heard of. Our reviewer Kevin says it’s worth a look.

‘The Single Moms Club‘ – Tyler Perry. Enough said. You already know whether you’re in his audience or not.

Speaking of oblique connections to Christopher Nolan (as I did above when talking about ‘Transcendence’), the Criterion Collection upgrades the original 1997 Norwegian thriller ‘Insomnia‘ (which Nolan later remade with Al Pacino) to high definition this week. Also available is a box set called ‘The Essential Jacques Demy‘, which compiles six of the French director’s features: ‘Lola’, ‘Bay of Angels’, ‘The Umbrellas of Cherbourg’, ‘The Young Girls of Rochefort’, ‘Donkey Skin’ and ‘Une Chambre en Ville’. ‘The Umbrellas of Cherbourg’ in high-def should be quite a treat.

As I recall, Park Chan-wook’s ‘Vengeance Trilogy’ wasn’t treated so well the last time it was released on Blu-ray. Tartan Video (via current distributor Kino) attempts to make up for that with an Ultimate Revenge Edition (is that really the best name they could come up with?) of the first movie, ‘Sympathy for Mr. Vengeance‘. How much of an upgrade the disc will be, I don’t know.

Also from Kino are a pair of Billy Wilder classics: ‘The Private Life of Sherlock Holmes‘ and ‘Witness for the Prosecution‘.

Just about wrapped up with the ‘Star Trek: The Next Generation’ restoration work, CBS Films gives some attention to the epic 1980 James Clavell miniseries ‘Shôgun‘, in which Richard Chamberlain beat Tom Cruise to the punch and became the first white samurai. Somehow, it seemed less ridiculous at the time.

I don’t have any must-buys this week, but both Criterions will go on my wish list for later. Does anything grab your attention this week?