We’ve got winners! When we offered two lucky readers the chance to win ‘Black Swan‘ on Blu-ray by entering our photo caption contest, you guys came through in a big way. We had just shy of 300 entries. Really, you’re all winners in my book, but unfortunately I only have two copies to give away. Follow after the break to find out who won.

The contest was simple. All you had to do was come up with a funny or clever caption for the following photo: 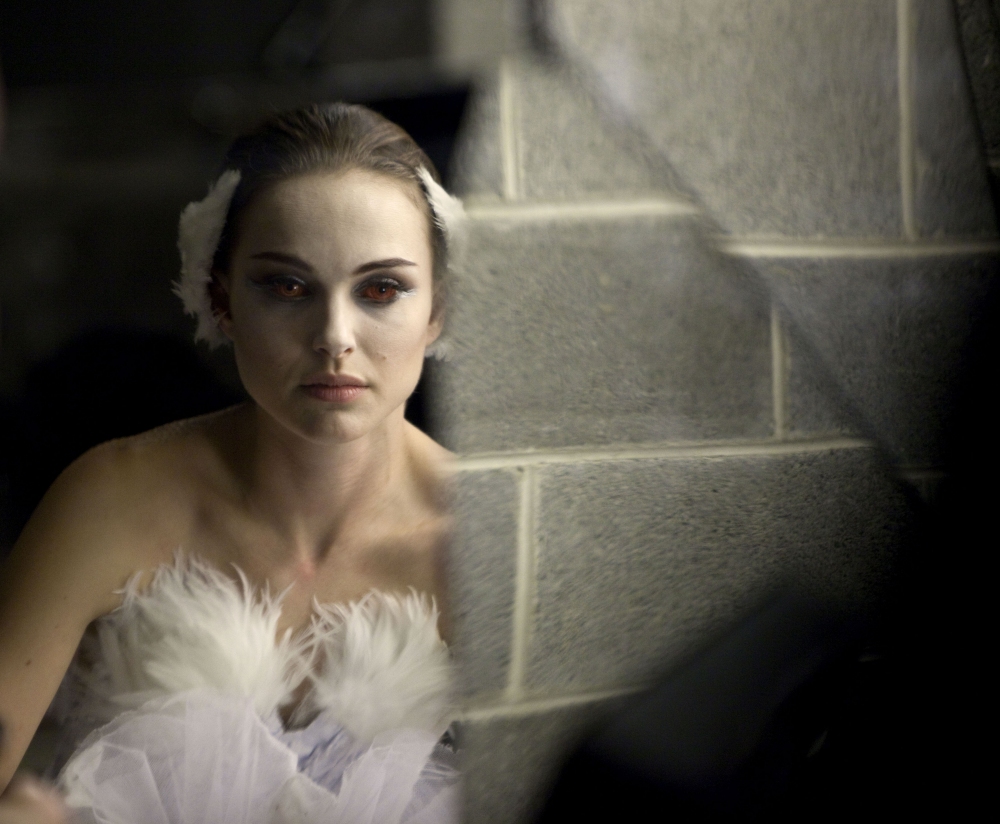 We received a ton of great entries. It was a challenge to narrow down the field to just two winners. I initially also tried to cut the honorable mentions down to ten, but you guys rocked this contest out.

If your entry isn’t mentioned here, don’t take that to mean that it wasn’t funny or I didn’t like it. The competition was just really tough. In no particular order, here are a bunch that tickled my funny bone.

There is no Nina, only Zuul.

We got a lot of Bjork jokes in the comments. James wasn’t the first, but I think his is the simplest and clearest.

This is such a terrible pun, but I have to admit that it made me laugh. As did these two from EM:

EM also gave us this next one:

“…and lo, everyone saw that the ugly duckling had grown into a hideous human-swan abomination.

I don’t know what it is, exactly, but something about the blunt “THE END” makes me laugh.

I liked both of these from Eric:

“I thought it odd, asking if I was OK doing a ‘thespian’ scene.”

“Damn Red-Push, I gotta get this mirror calibrated.”

All of these from Scott are good too:

– “That bitch said she did HOW much of the dancing??”

– “I should have never done that line of Charlie Sheen…”

– “So doc, I did this movie in New Jersey called ‘Garden State.’ One thing led to another with this guy I met named Situation, and when I woke up the next morning my eyes were bloodshot and I was growing feathers.”

So THIS is what I get for doing “No Strings Attached”….

Meanwhile in an alternate reality, Natalie Portman stars in a movie that doesn’t suck…

Harsh, but so true.

A couple of people chimed in with this ‘Billy ‘Madison’ reference. I believe Nick was first:

“Stop looking at me, swan!”

Oh, man… Franco really does have the best weed.

ZOM-B gave us these:

This is so going to win me an Oscar.

There’s something I need to get off my chest.

I’m back in the Princess Leia hair buns… how the hell did this happen?

Mr. Magorium’s Fucking Emporium… what the hell was I thinking?

I’m sure they can fix these bloodshot eyes in post, right?

Rob came up with these two:

What if this is as good as it gets?

So, if she weighs less than a duck…..she’s made of wood?

Her hours of practicing her “Blue Steel” look had finally paid off as she transcended to the next level,”Red Steel”. The pupil was now the master.

Jay gave us this ‘Boogie Nights’ reference. It doesn’t really have anything to do with the photo, but it’s still a funny as hell line:

I like simple pleasures, like butter in my ass, lollipops in my mouth. That’s just me. That’s just something that I enjoy.

I would love to hear Natalie Portman deliver this line. I don’t really care what the context is. She should just blurt it out as a non sequitur in whatever her next movie happens to be. (Incidentally, even though I know that Philip Baker Hall said the line in the movie, in my head it sounds like something Vince Vaughn would say. Does anyone else have this problem?)

Anyway, that brings us to…

Yes, it’s a second ‘Boogie Nights’ reference. (Technically, Brad got this in first.) This one wins the prize because it really fits the photo. In the movie scene, Dirk was similarly staring into a mirror when he delivered this dialogue. And of course, both scenes are about performers getting ready for a big gig.

We had other “mirror scene” entries such as ‘Snow White’ and ‘Taxi Driver’, but I just knew this one was a winner as soon as I read it.

Our second copy of ‘Black Swan’ goes to Vincent for this line that Natalie Portman delivered in ‘Léon: The Professional’:

“Is life always this hard, or just when you’re a kid?”

Somehow, this just seemed perfect to me. It hits that sense of despair that her character in ‘Black Swan’ is feeling in this scene. And it’s also one of the few other good movies that Portman has ever made. There’s a nice sense of symmetry in that.

So congratulations to both Brad and Vincent for winning ‘Black Swan’ on Blu-ray! I’ll be contacting you soon with instructions on how to collect your prizes.

Thanks for participating, everyone!