We home theater fans can be nit-picky types, sometimes obsessing over pixel-by-pixel imperfections in the latest Blu-ray releases. One such controversy erupted at the end of May when Stanley Kubrick’s ‘Barry Lyndon’ was released on the format in an aspect ratio slightly different than what people assumed it should be. After much arguing, a definitive answer has finally been uncovered.

I’m not kidding when I say that we’re talking about a slightly different aspect ratio. It had long been assumed that Kubrick’s preferred projection ratio for the movie was the old European 1.66:1 standard. Legend had it that he’d even gone so far as to ship the appropriate projection mattes to theaters that were not equipped for that ratio. (1.66:1 was largely supplanted by the wider American standard of 1.85:1 by the time ‘Lyndon’ was released in 1975.)

Previous VHS, Laserdisc, and DVD editions of the movie were released at an aspect ratio of about 1.60:1 (not a typo), which appears to be the fully exposed camera negative. In a move that was unusual for the time, Kubrick shot ‘Barry Lyndon’ with hard mattes in the camera to prevent the full 1.37:1 film frame from being exposed to light. Essentially, this means that the movie is letterboxed on the camera negative itself.

Warner Bros. released ‘Barry Lyndon’ on Blu-ray this year simultaneously with ‘Lolita‘ and ‘A Clockwork Orange‘, both of which are presented on disc in the expected 1.66:1 ratio with small pillarbox bars on the sides of the 16:9 high-def frame. Yet for some reason, ‘Barry Lyndon’ is instead slightly cropped on the top and bottom of the picture to fill the 16:9 (1.78:1) screen with no pillarboxing.

Let me be clear that the difference between 1.66:1 and 1.78:1 is pretty small. In high-definition terms, it amounts to a loss of about 38 pixel rows (out of 1,080) off of each the top and bottom of the frame (76 total). A difference this small falls well within the expected projection tolerances at most commercial cinemas. In fact, the ‘Barry Lyndon’ Blu-ray looks perfectly fine at 1.78:1. No picture information appears to the eye to be missing or uncomfortably cramped. A viewer who didn’t know about this controversy in advance would no doubt never suspect that anything was wrong.

However, Stanley Kubrick was a notorious perfectionist who expected things to be done to his exacting standards. For this reason more than any other, some fans of the film were outraged at this change in aspect ratio, no matter how negligible.

So, why did Warner Bros. change the aspect ratio in the first place? It turns out that this was done at the instruction of Kubrick’s personal assistant of many years, Leon Vitali, who has discretion from the Kubrick estate to supervise the video presentations of the director’s films. Vitali insists that, contrary to popular belief, Kubrick’s intended aspect ratio for ‘Barry Lyndon’ was in fact 1.77:1 all along (again, not a typo), and that stories of his instructions to theaters that the movie be projected at 1.66:1 were purely apocryphal and never really happened. Ever since the Blu-ray was released, he has been adamant that Kubrick hammered the point home to him on countless occasions that 1.77:1 was the proper aspect ratio for ‘Barry Lyndon’.

That would seem to resolve this debate, wouldn’t it? Unfortunately, no. You see, Vitali has proven over the years to be an unreliable source of technical information when it comes to the presentation of Kubrick’s movies. Back in 2001, during an interview with DVDFile to promote Warner’s DVD editions of Kubrick’s films, Vitali defended the choice of 4:3 aspect ratio transfers for movies like ‘The Shining’ and ‘Full Metal Jacket’. He later contradicted himself and now says that these same movies should be 1.66:1. (Warner’s Blu-ray editions that Vitali presumably supervised are actually 1.78:1 like ‘Barry Lyndon’.)

In that old interview, Vitali was also asked why ‘A Clockwork Orange’ was issued on DVD in a non-anamorphic letterbox 1.66:1 transfer, even though an anamorphically enhanced transfer at the same aspect ratio would have provided better detail and clarity. He stated that anamorphic enhancement “alters perception” of the movie and that Stanley Kubrick never wanted his movies to be presented on DVD with anamorphic enhancement. It’s very clear that Vitali had no idea what anamorphic enhancement even was. He seemed to think that it somehow equates to changing the camera lens years after the movie was shot and completed. This is of course complete gibberish.

(The original interview has been purged from DVDFile due to mismanagement by the site’s current owners. If this Web Archive link doesn’t work, I can provide the text of the article.)

If that isn’t enough to cast doubt on Vitali’s authority to determine the proper aspect ratio for ‘Barry Lyndon’, film critic Glenn Kenny has found the smoking gun that should provide a definitive answer to this question. One of his sources dug up the following letter that Stanley Kubrick sent to theater projectionists upon the film’s release in 1975. (Click to enlarge.) 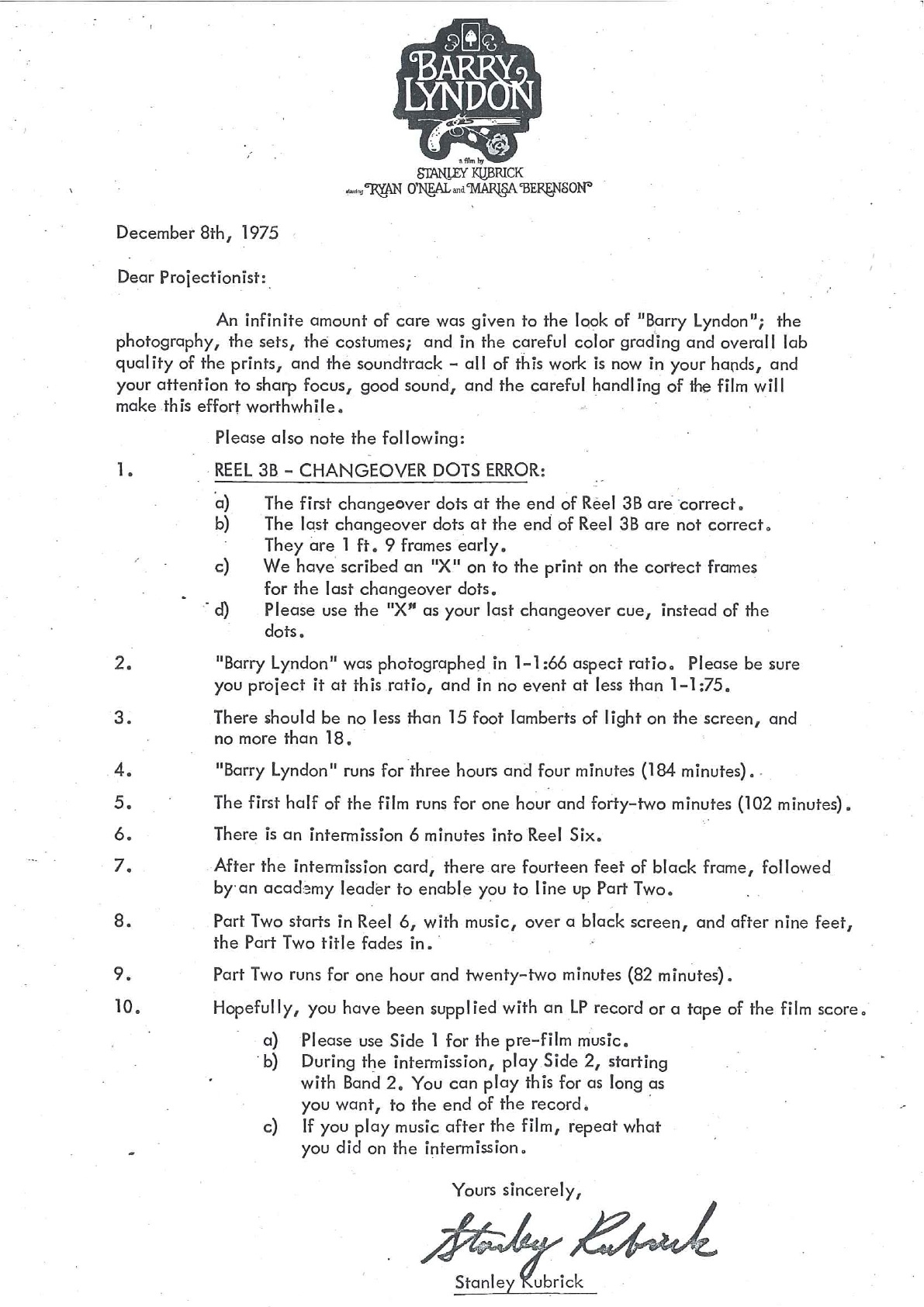 “Barry Lyndon” was photographed in 1-1.66 aspect ratio. Please be sure you project it at this ratio, and in no event at less than 1-1.75.

Note that “less than” refers to the height of the frame. A lesser height would mean more matting and a wider image.

This then serves as confirmation that Stanley Kubrick’s preferred aspect ratio for ‘Barry Lyndon’ was indeed 1.66:1, but that extra matting down to a ratio of 1.75:1 would still be considered acceptable (though not ideal). What he did not want to see was the movie masked all the way down to 1.85:1, which was the expected practice for theaters at the time (and still is).

At 1.78:1, the Blu-ray edition is so close to that acceptable limit that (in my opinion) it’s not worth quibbling over. I wish that the Blu-ray had been pillarboxed to Kubrick’s preferred 1.66:1 as ‘Lolita’ and ‘Clockwork Orange’ are, but the disc is certainly not “butchered” or “unwatchable” (hyperbole thrown around by some of the disc’s most vocal critics).

With this evidence now in hand, has Leon Vitali owned up to his mistake? Of course not. In his latest interview, Vitali continues to insist that the movie was photographed at 1.77:1 (which it plainly wasn’t, or the older DVD transfer wouldn’t have more picture information at the top and bottom of the frame than the Blu-ray), and that is the correct presentation ratio for the movie. His arguments make less and less sense the more he talks. Honestly, I think that he’s confused as to the fact that 1.77:1 is a wider ratio than 1.66:1. The way he explains it, he appears to believe the opposite.

The greatest irony in all this? ‘Barry Lyndon’ is perpetually one of Stanley Kubrick’s least popular movies, owing to the fact that it’s so deadly boring. Even in a best case scenario, the Blu-ray would be lucky to sell a couple thousand copies nationwide, if even. The people who would be inclined to buy it are the Kubrick fanatics who demand that the director’s wishes be followed to the letter. This trivial aspect ratio issue, that would be so inconsequential for any other movie in the studio’s catalog, has probably lost Warner Bros. about half those sales.