“You wouldn’t like me when I’m angry.”
– Marvel Studios President of Production Kevin Feige to Edward Norton.

Well, if he didn’t really say that, he sure should have. Because it would have been awesome. I’m sure that most comic book fans have heard by now the news from earlier this month that Edward Norton has been fired from his role as The Hulk in the upcoming superhero crossover movie ‘The Avengers’. Now word comes from the San Diego Comic-Con that Marvel Studios officially announced that his replacement will be… Mark Ruffalo. Huh.

This marks the third actor in as many movies to play the role. First we had Eric Bana in 2003’s drearily dull ‘Hulk‘. It really wasn’t the actor’s fault that the movie turned out so tedious, but Marvel decided to clean house for 2008’s quasi-sequel/quasi-reboot ‘The Incredible Hulk‘ anyway, and brought Edward Norton in to star. To be honest, that picture wasn’t particularly good either, but at least it was slightly less boring. Comic fans seemed to find it more acceptable.

Norton has a notorious reputation for being difficult and temperamental to work with. You’d think that would actually make him a good fit for the rage-fueled Hulk character. However, he apparently must have pissed off the studio execs a little too much. Despite earlier indications that he was on board with ‘The Avengers’ and looking forward to working with director Joss Whedon, Marvel’s Kevin Feige announced his dismissal in astoundingly pissy terms:

We have made the decision to not bring Ed Norton back to portray the title role of Bruce Banner in the Avengers. Our decision is definitely not one based on monetary factors, but instead rooted in the need for an actor who embodies the creativity and collaborative spirit of our other talented cast members. The Avengers demands players who thrive working as part of an ensemble, as evidenced by Robert, Chris H, Chris E, Sam, Scarlett, and all of our talented casts. We are looking to announce a name actor who fulfills these requirements, and is passionate about the iconic role in the coming weeks.

So, now we know that the new “name actor” in question will be Mark Ruffalo, from ‘Shutter Island‘ and ‘The Kids Are All Right‘. His probably isn’t the first name I would have thought of, personally, but he’s a decent actor. 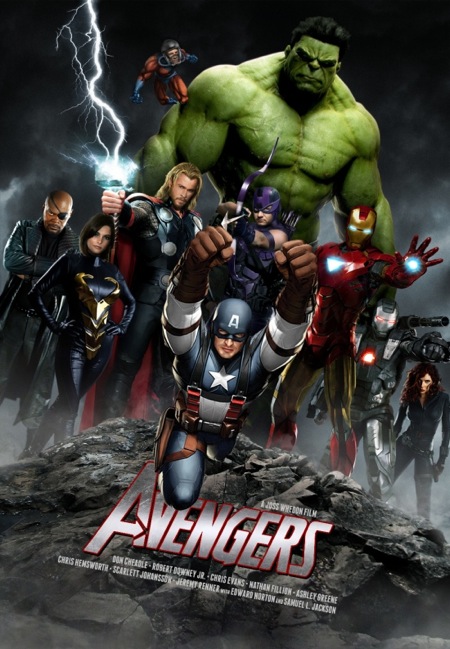 I have no particular attachment to this franchise, in either comic book or movie form. I am a fan of director Joss Whedon, though. So I hope this works out for him.

And that’s the first poster to the right. (The poster may not be official. See comments below.)

[via Topless Robot, here and here.]