‘Persona 3 Portable’ is the first game in the ‘Persona’ series that I’ve played. I’ve always been intrigued, but never found the time. It’s like that girl you’ve been fawning over and finally get the nerve to ask out. Well, ‘Persona 3’ and I finally got together, and my biggest regret is that we didn’t do it sooner.

Five years ago, you could have been forgiven for not knowing Atlus. The company was active in the U.S., but wasn’t exactly grabbing headlines with games like ‘Tactics Ogre’ and a ‘Double Dragon’ remake for the GBA. Then came 2007, and the release of both the highly praised ‘Odin Sphere‘ and ‘Persona 3,’ which made waves through the JRPG community. 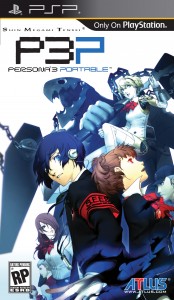 At this point, if you’re a fan of Japanese role-playing games, you really have no excuse not to know the company. The ‘Persona’ series has taken off in a huge way, and Atlus has become a name worth paying attention to. Even games they only publish – games not developed by Atlus, like ‘Demon’s Souls‘ and ‘3D Dot Game Heroes‘ – hold a bit of esteem.

A quick disclaimer for the folks who get excitable about this sort of thing. First off, I haven’t beaten the game. I’m a little over twenty hours into it, which I consider to be enough time to assess the gaming experience. If, upon finishing, I find that there’s something that changes my mind significantly, I’ll let you know.

Secondly, this review will probably contain some minor spoilers. Much of the plot is given to you within the first few minutes of the game, and the rest can probably be inferred from that. Still, if knowing minor story elements from the first twenty hours of the game is going to bother you, you’ll want to find yourself another review.

Now that all that’s out of the way, let’s jump into it.

‘Persona 3 Portable‘ is a remake of ‘Persona 3’ for the PlayStation Portable. It shares the same plot, but takes the mechanics from ‘Persona 4’ that make combat smoother and less frustrating. It’s also got a mode that allows you to play as a female, which lets you see the story and characters from a different perspective.

If I were to describe it as a combination of games – something that’s not entirely useful but always fun to do – I’d call it a mix between ‘Pokémon’ and the first hour of ‘Final Fantasy VIII.’ I mean that in the best possible way.

There are two phases of gameplay. It starts with daytime, where you go to school, take tests, interact with your classmates and even get part time jobs. Then, during the night, you can head to a giant monster-infested tower called Tartarus that grows out of your school. The really interesting thing about these two different phases is that each affects the other, either directly or indirectly.

The day phase usually moves the quickest. On every day but Sunday, your day begins at school. You’ll have a few conversations or answer questions in class before finally deciding what you’re going to spend the afternoon doing. You can earn some money working, build up your own stats or improve your friendships with others. 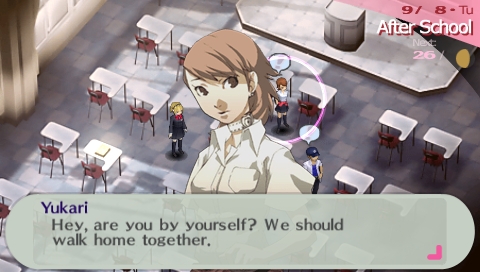 Relationships are built through dialog choices, and have a much more rudimentary interface than games like ‘Mass Effect.’ It’s for a different purpose, though, so it works out nicely. In ‘Mass Effect’, you may be concerned about the story progression; but the sole purpose of friendships in ‘Persona’ is to build your skills, so giving the happy answer is the whole point.

Once you establish a relationship, you gain a Social Link, which makes certain Personas stronger. When I joined the swim team, for example, I gained a link to Personas of the Chariot type. By competing more and helping a teammate through an injury, I was able to build that link.

Your Persona is sort of like your Pokémon, your Espers or Eidelons. They’re creatures that help you in battle by attacking the enemy and casting spells of all types. They don’t come into play during the day, but they’re essential at night.

On most nights, you’ll have the option to go to the tower Tartarus, which is the part that will feel a lot more familiar to RPG fans. You start out at Floor One and climb from there. Each floor contains monsters, treasure, an exit to the outside, and a stairway leading up. The higher you go, the stronger the monsters, the better the treasure, and the greater the benefit of winning.

The twist is that you can’t save your game in the tower. When you clear a floor you’ve got to make the decision to either go down and save, or climb to the next level. If you go back up after saving, the floor will be repopulated. Some people may find that a bit frustrating, but I’m actually a fan of the ‘Persona 3’ save system. 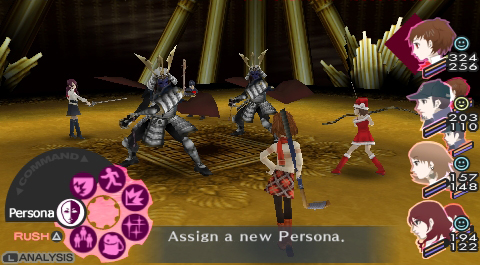 Combat is fairly standard RPG fare. It’s turn-based, and you can choose between attacking or using a Persona ability, which is essentially the equivalent of casting a spell. One particularly interesting aspect is that while most abilities take from your Spell points, some take from your Hit points. This adds a little variety and requires you to think a bit more before using abilities.

After a battle, you may have the chance to choose a card in a variation of the shell game. From these cards, you can get extra experience, weapons and new Personas. In all, there are over 100 Personas in the game.

The collectability aspect of ‘Persona 3′ is obvious. “Gotta catch ’em all,” becomes a mantra. But unlike Pokémon, you’ll probably want to catch the same Persona more than once, since you’ll be fusing Personas you have together in order to create new and stronger Personas.

The process of fusing Personas is fairly simple. What’s complicated is figuring out the best way to fuse. Each Persona created has the chance to take on some of the abilities of the Personas fused to create it. So while there are a limited amount of Personas in the game, there are a seemingly unlimited number of fusion combinations.

The game is absolutely addictive, and the two different phases really make it work. If you’re sick of fighting, you can take a few days off from Tartarus and just go sing Karaoke or hang out with your friends. If you’re ready to get into some fights, you can swing on over to the tower. By the time you’re sick of both, there’s a new event taking place during the game that switches things up. 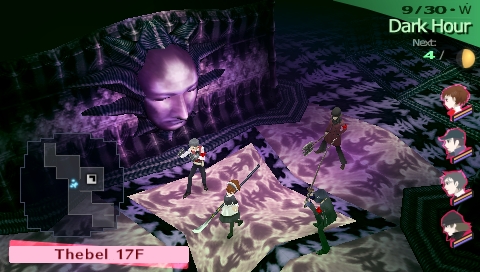 This also makes ‘Persona 3 Portable’ a great game to have on the PSP. If you’ve got 5 minutes to play, you can go through a day of school. If you’ve got 10, you can do a little more, or fuse some Personas. If you’ve got half an hour, you can rail through a few floors of Tartarus. The game is perfect to play in chunks, so much so that it seems like it was designed for the PSP.

The visuals of the game are great. I never had trouble reading text on the small screen. Details on the enemies and hero characters are clear and there’s never any confusion about what’s what. The only complaint I have about the visuals is that the tower gets a little dark to play in if I hang out in a really well lit area, like my balcony. I can still play. It’s just a little tough to make out at times.

Dialog and daytime events are presented as a sort of a motion comic, which is really effective. I’m told the PS2 version features full animations, but I didn’t find the PSP presentation to be detrimental at all. The excellent voice acting makes up for the lack of action on the screen during some moments

I absolutely have to call out the music of ‘Persona 3 Portable.’ It’s anything but typical for Japanese RPGS. The fight music is a sort of hip-hop song, the music that plays during the day is a high spirited horn ditty, and the game’s theme is some really cool rock music.

I can safely say that ‘Persona 3 Portable’ is the single best PSP game I’ve ever played. It’s also the best RPG that I’ve played in a long time. It’s not without some flaws, but no game is. It succeeds despite those flaws. Mixing the mundane and the fantastic, like swim meets and horrible demonic creatures, really goes a long way to keep the game fresh, even after hours and hours of play.

If there’s one PSP game to own, ‘Persona 3 Portable’ is it.