Here’s something silly to start off a Friday morning. While Dick is our resident gaming guru around here at The Bonus View, I’ve personally never much progressed beyond the old NES, which is still hooked up in my home theater and gets more use than my PS3. Now, the folks over at Comics Alliance have whipped up a series of (fictional) game images featuring major comic book icons in 8-bit style. When I look at this, it actually makes me a little sad that I can’t play these games, which would be much more my speed than any of the latest whiz-bang First Person Shooters.

Below is their vision of Thor, the god of thunder, done up like a ‘Mega Man’ knockoff. Notice that he’s shooting a hammer. That’s awesome. 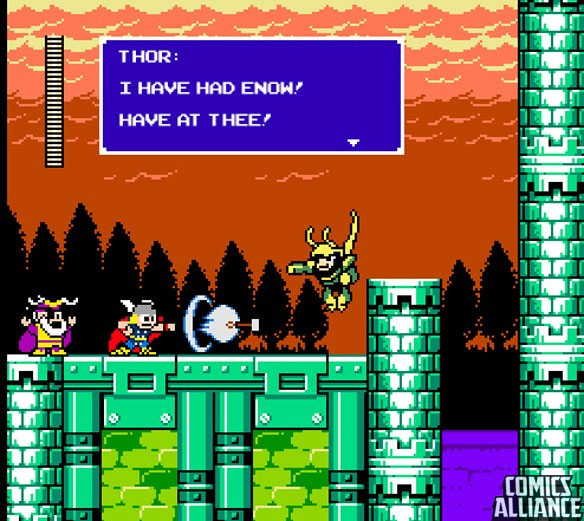 Other great mish-mashes include Batman via ‘Super Mario Bros.’, the X-Men via ‘Final Fantasy’, and Hellboy via ‘Castlevania’. But the best of all has to be The Punisher by way of ‘River City Ransom’. I’d pay good money to play that.

Check out all of their images over at Comics Alliance.

And if you like that, take a look at this banner of almost all the Marvel heroes rendered as ‘Mega Man’ sprites, or this page of ‘Mega Man’ robots reimagined as ‘Final Fantasy’ characters. Good stuff. I approve.