'ARK: Survival Evolved' has been one of the most active titles I’ve seen in Steam’s Early Access, with content dropping on a weekly basis for nearly a year. It has also been very successful, routinely fitting into Steam’s top 10 played games at any given time, and it’s not due for release until June. We previously inspected the PC version, and an Xbox One edition has since been slowly developing in the Game Preview program since January. With the recent and auspicious release of the giant beaver, terror bird, grappling hooks and so on for the console edition, we decided to take another look at the dino survival title. 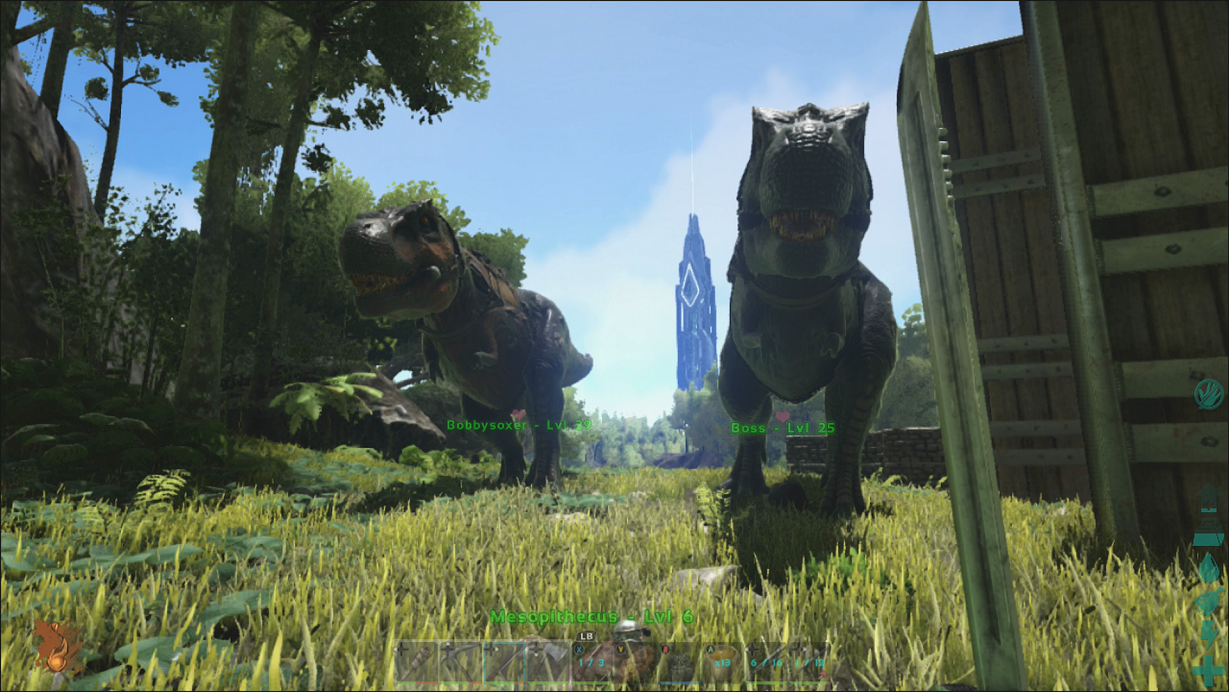 Wildcard has been pretty good with adding updates to the Xbox edition in larger bundles, which at any time is a few weeks behind the PC version. There are official PvP and PvE servers, and of course single-player or private options for the less social, like myself. As I mentioned on the PC side, there’s something about the 24/7 PvP that I’m just not interested in, and even the PvE servers have options for trolls. Dedicated servers are also possible, but this requires a spare Xbox, which many players may not have just lying around. So my friends and I play mostly on my server, which I leave on even when I’m away from the box, and they play in their own little servers when mine isn’t up. It’s not perfect, but it works well enough for us. 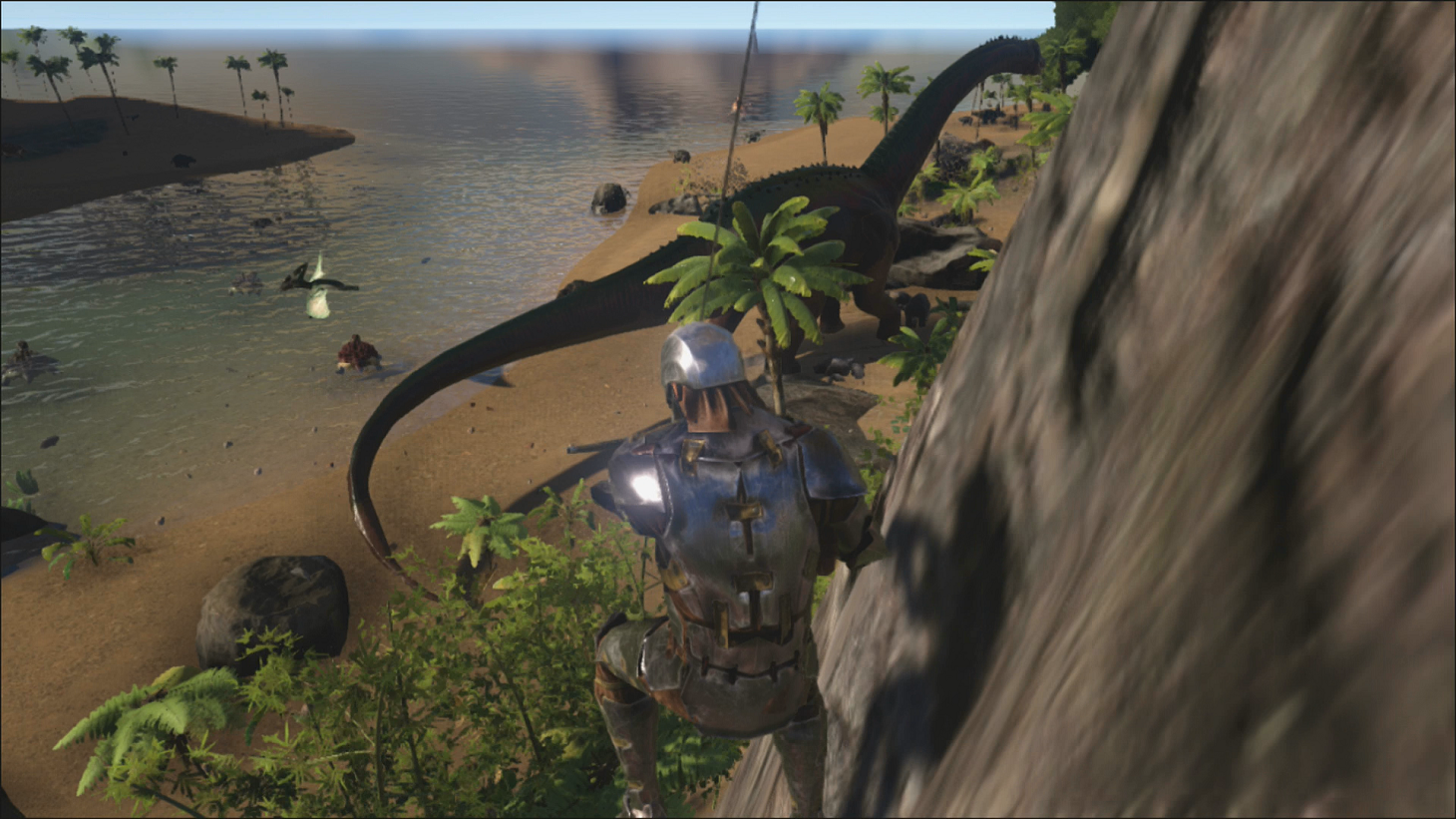 While I naturally was unable to port my high-level PC character over from Steam, the admin settings on the Xbox are comprehensive and I ratcheted up the experience gained bar to Power Ranger levels so I didn’t have to derp around with wooden tools for 8 hours straight. My tribe has managed to built an open-air house (i.e. a shack), a modest animal pen, and a respectable collection of creatures to help us out. ARK has little direction for players, but so much to do that players can specialize in different activities based on their interests. As in 'Minecraft,' I am a poor architect, so I leave the building to my more crafty tribemates. I am thoroughly addicted to the 'Pokemon'-like taming and collection mechanics though. I have no problem collecting eggs, cooking kibble, and hunting down rare specimens to bring home to the family and aid with our gathering and resourcing. Not unlike a strategy game loop, our resources are constantly being whittled away and must be replenished - metal and charcoal for bullets, stone and wood for building materials, and raw meat for food. Our dino collection has ballooned to a proper Duggar size, so feeding the household can be time-consuming.

This is a true sandbox, on a large island where going even a few hundred feet on foot can lead to several adventures in quick succession. The local wildlife is extremely violent, from the tiny compies up to the massively overpowered gigantosaurus. Expansive cave networks lie underground, filled with treasure and scary creature alike. The air is the only true fast travel system, as teleporters have not yet been implemented, but the travel is only as fast as your fastest flying creature. The oceans around the island have their own distinct ecosystems and coveted crafting materials, and they grow more interesting whenever a new aquatic creature is released. Some of my favorite gameplay is found in the deep, which is often desolate and lonely, but quickly turns deadly when a roving shark or pair of territorial plesiosaurs sneaks up from behind. 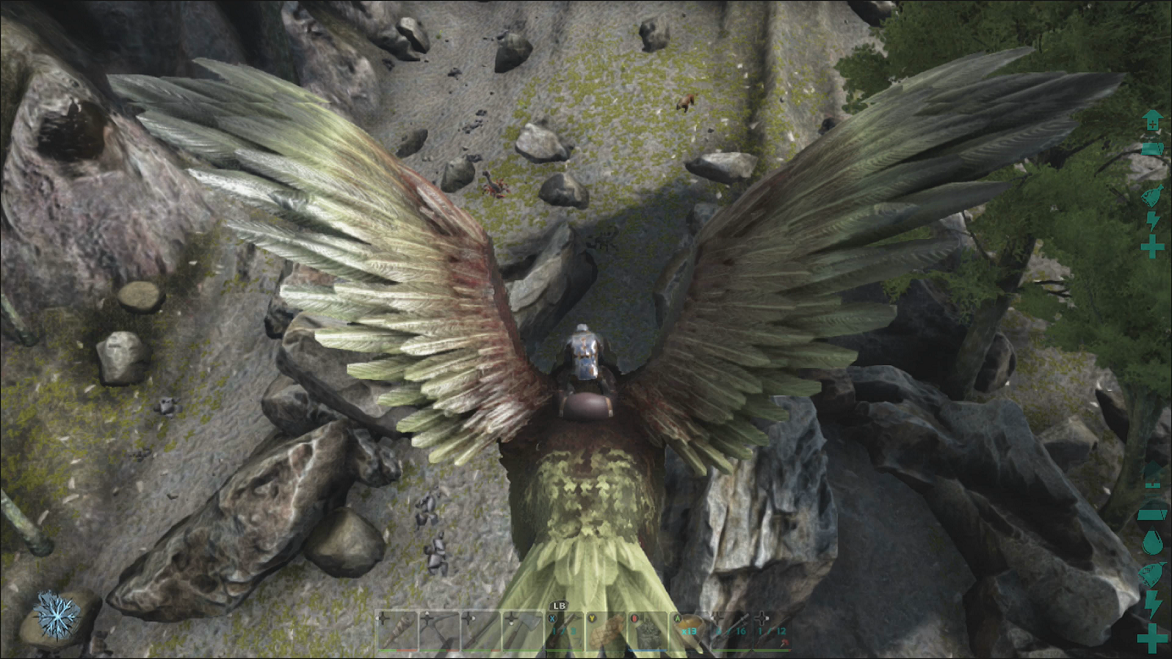 So the good news is that in terms of content, the Xbox version of 'Ark' lags only slightly behind its PC brother. The bad news is that the technical side of things is just destitute. I try to avoid sensationalist language whenever possible while writing, but please believe me when I say that this game looks and plays miserable. The framerate is usually less than 20, dipping into single digits quite commonly. The stuttering is so frequent that doing something as tame as item management through the menus is a real chore (don’t get me started on the menus - the controls have only been slightly optimized for a controller). The textures and models look ancient, even elements that have received extensive work by the devs, like mammalian fur. Draw-in is terrible. I could go on, but I will let the accompanying stills and videos speak for themselves. I do not dispute that consoles in their current incarnation are not remotely capable of things that a desktop can do, but ports can do far better than this.

And yet, something strange has happened. I have put almost 100 hours into the Xbox version - far less than the 287 on Steam, but still a lot for a game that came out only a few months ago. 'ARK' is such an amazing experience that even a shoddy port can only dilute it so much. My PC tribemates, who have all spent a varying amount of time with me on the console server, frequently mock me while I slowly build up my dino collection and wait for the next batch of updates from Wildcard. But even so, there’s something about the island on the Xbox that keeps drawing me back. 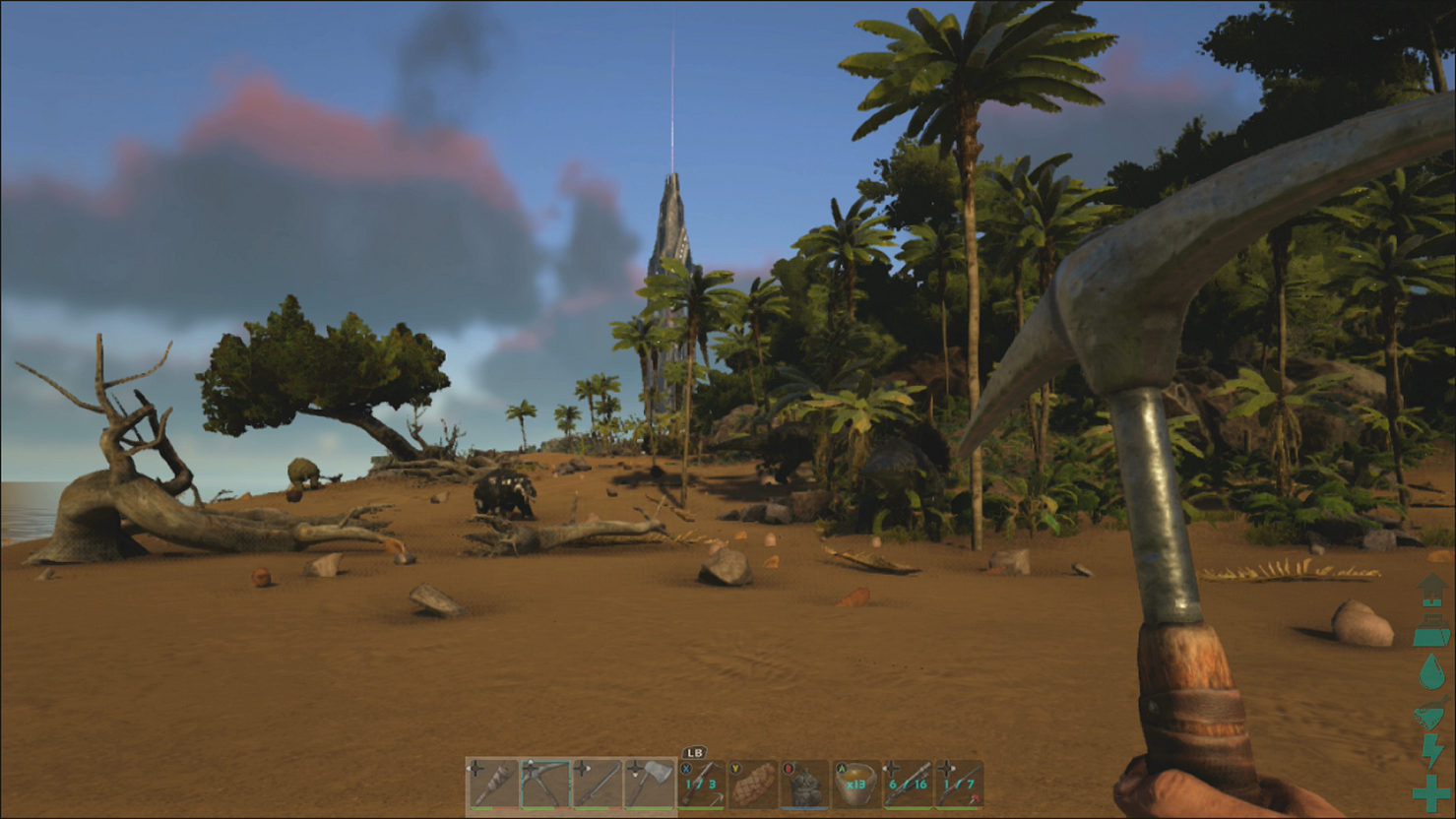 I firmly believe that there is still time for the studio to seriously improve the presentation. Many companies have been able to create big, beautiful open worlds on the Xbox One without sacrificing a significant amount of visual or technical acumen. And in terms of the Preview phase, dramatic improvements are not unheard of: recently Frontier was able to turn a rather wonky pre-release 'Elite: Dangerous' into a smooth experience. Wildcard has done a bit of tinkering with 'ARK’s' visuals since the Preview started, and perhaps they can figure out a way to make it awesome, or even just playable. Until then I will be dutifully taking my ankylosaur up the nearby mountain every day, gathering more metal in my lonesome hermitage for the next big project.

'ARK: Survival Evolved' is in Early Access on PC, in Game Preview on Xbox One, and will be on PS4 later this year. A official non-Early Access release is expected for all three platforms in 2016.