Forming a Tribe in the Land of the Lost: 'ARK: Survival Evolved' Hands-on

'ARK: Survival Evolved' is a tale of starvation, dehydration, heat exposure, and dinosaurs. It began Early Access in June, after being in development only since October 2014. It is a collaboration between Studio Wildcard, a Seattle company led by a former Microsoft art director, and Instinct Games, based in Egypt.

Because 'ARK' was a free title over the weekend of August 28th, 2015, I imagine many people logged in and experienced something very similar to what happened to me. I started a private server and was dumped into 'The Land Before Time', except that instead of cuddly animated creatures, everything had mouthfuls of sharp teeth and wanted to eat me. I retreated to the southern coast of the island, which is called simply the ARK, and using my knowledge of survival games, began punching trees with my bare hands to collect wood. Collecting wood leads to making hatchets, which leads to pickaxes and other tools, which eventually lead to structures and weapons. 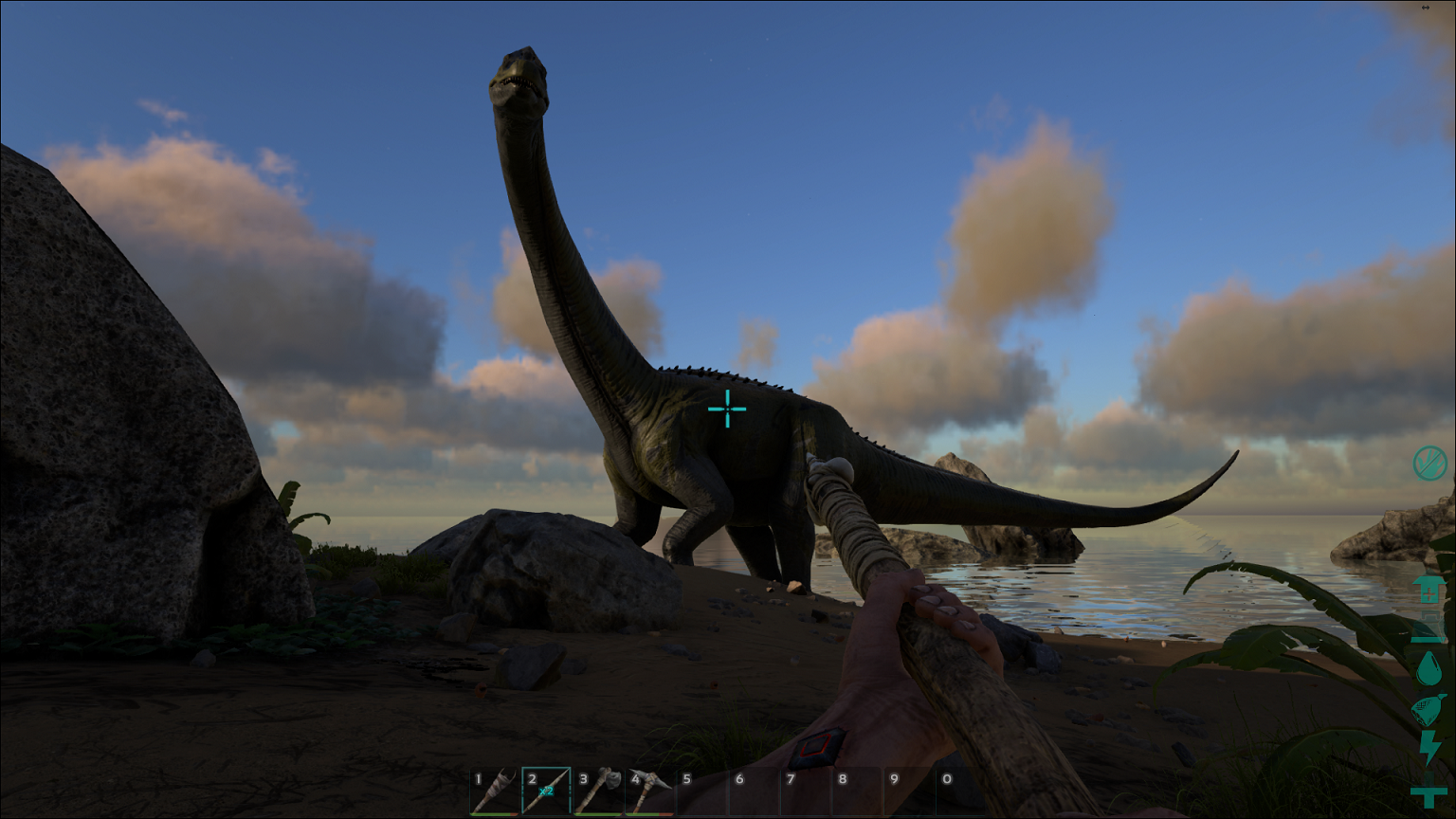 The ARK is full of nasty, brutish species, it’s true. It also has many docile herbivores, like triceratops, brontosaurus, and parasaurs. There are giant bugs, who are mean, and lots of sea-dwelling creatures, who are also mean. Except for a few herbivores, basically everything on this island wants to kill you. If you play on a public server, the other humans want to kill you too.

While firmly a hardcore survival game, 'ARK' offers elements of MMO and RPG gameplay. All creatures great and small have a level that determines their ferocity, including player characters. Almost any remotely constructive activity adds experience, even tree punching. Leveling up adds to basic attributes like melee damage, health, and oxygen retention, at the player’s discretion. It also gave me points with which I could buy blueprints and craft an ever widening arsenal of tools, weapons, and home improvement items. At level 10 I was able to craft small farm plots and grow berries for my tribe, complete with piped irrigation. A tribe is a party of human players that work together, or at least tend not to shoot one another. I peer pressured some friends into joining my tribe, and we had a blast avoiding dinosaurs and building up a modest one-room house on prime beachfront property. 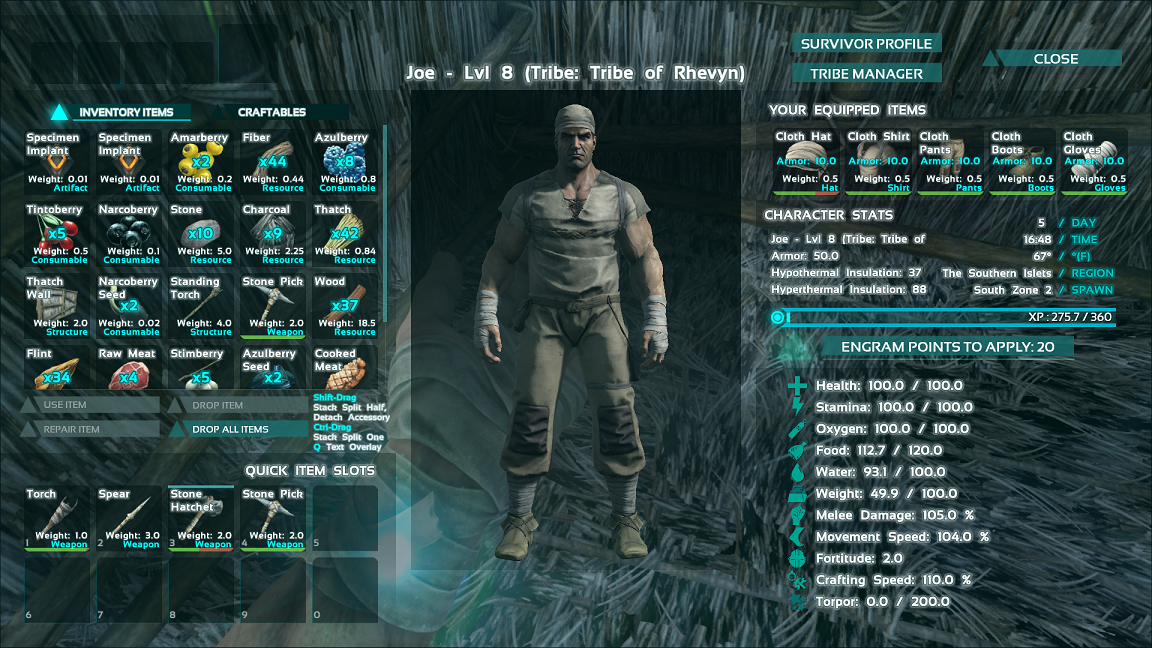 Because the ARK has its own circle of life, we often discovered creatures engaged in battle, or running from battle, or just dead bodies and lots of smashed trees. We learned to keep our distance and harvest the corpses furtively, to avoid aggro of high-level monsters that we didn’t have the firepower to dispatch. As soon as we discovered the tranquilizing effects of narcoberries we began to experiment with taming smaller creatures, like the frilled, poison-spitting dilophosaurus of 'Jurassic Park' fame (not the actual dilophosaurus, which is neither frilled nor venomous). Wildcard has explained that there is a reason in the lore why some of these monsters deviate from their historical counterparts, although that reason has not yet been divulged. 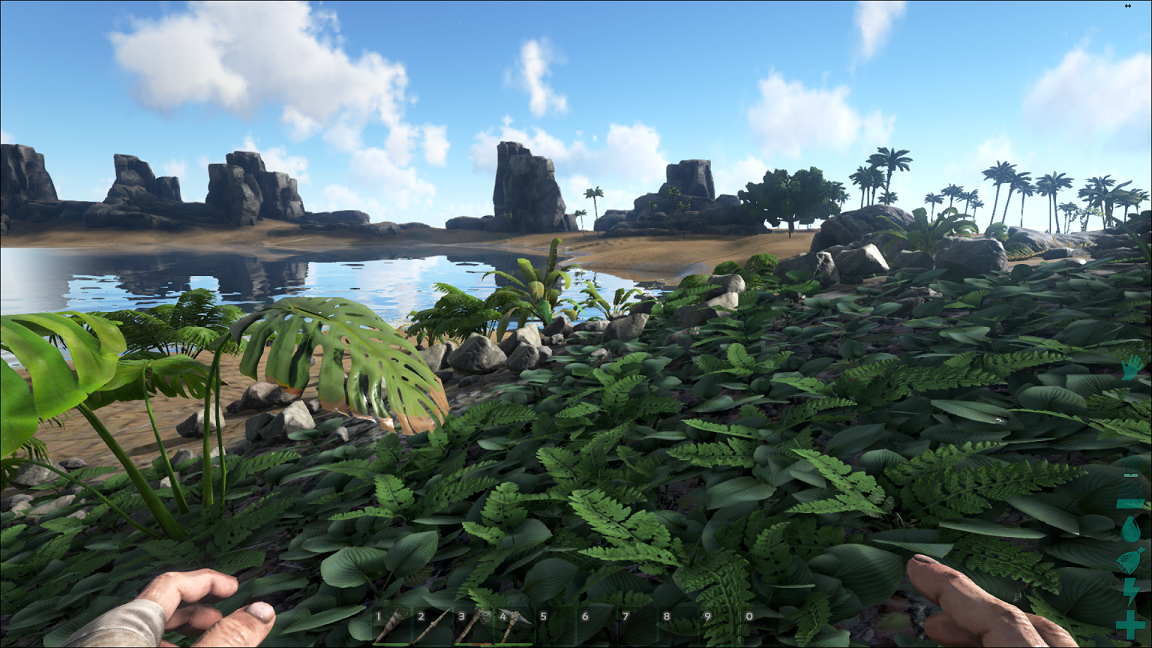 Speaking of lore, the game thus far is devoid of almost all exposition. All of the humans have an implant embedded in their forearms that identify them as "specimens", and that’s about it. There are a few futuristic, floating buildings on the island whose functions are a mystery. Every few minutes a light descends from above, dropping supply crates onto the ARK. They contain materials and crafted items, but have no accompanying documentation. I think it’s some kind of experiment, but who knows. 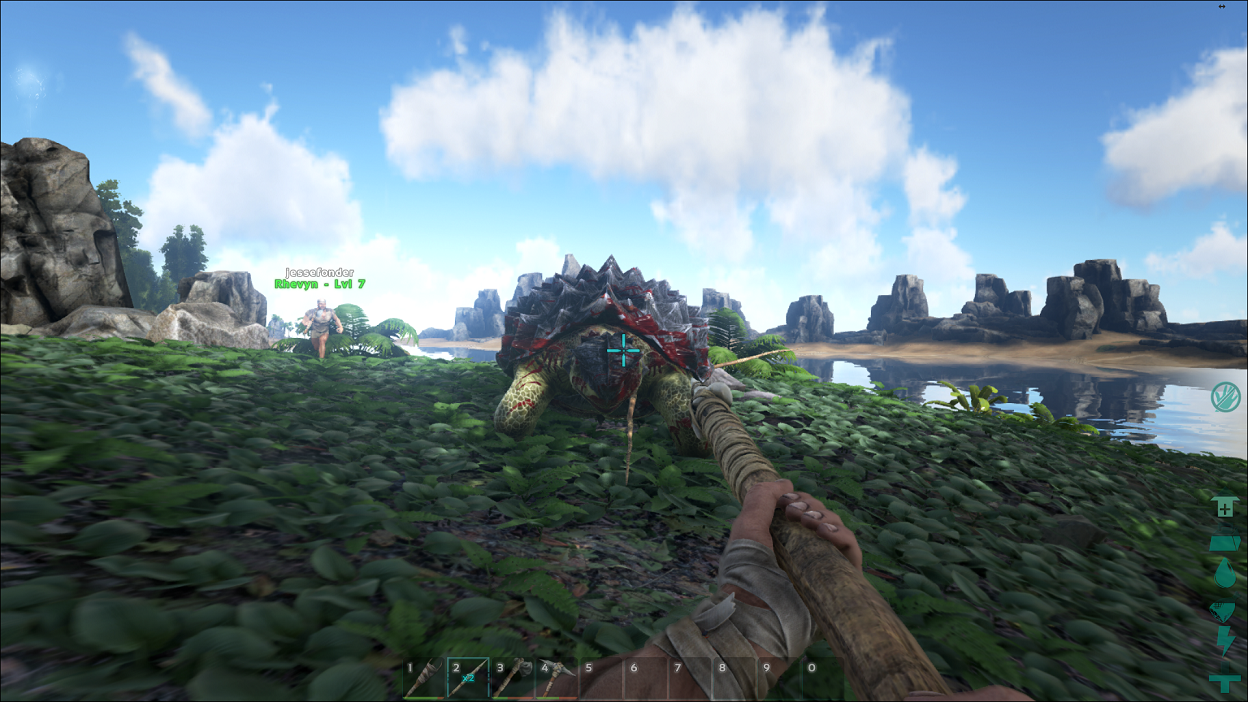 Built with the Unreal Engine, 'ARK' is a looker. Lighting and shadows are powerful, water is realistic, and the textures have lots of detail. The creatures in particular are gorgeous, from the small trilobites up to the massive brontosaurus and spinosaurus. The game is quite demanding on the Epic graphics settings, but still attractive on lower settings. Being an Early Access game there are lots of problems that crop up, some of them technical and some of them design-based. For instance, host tethering is an issue. Tribe members cannot move more than a few hundred yards away from the host. There is a cooldown on bed respawn - if the player dies during the cooldown, they spawn at a random spot that can be quite far from the death site. With no equipment or clothing, they now face an uphill battle after just dying, and have to get back their home or the spawn point. Thankfully, all experience and blueprints stay with the character even after death. 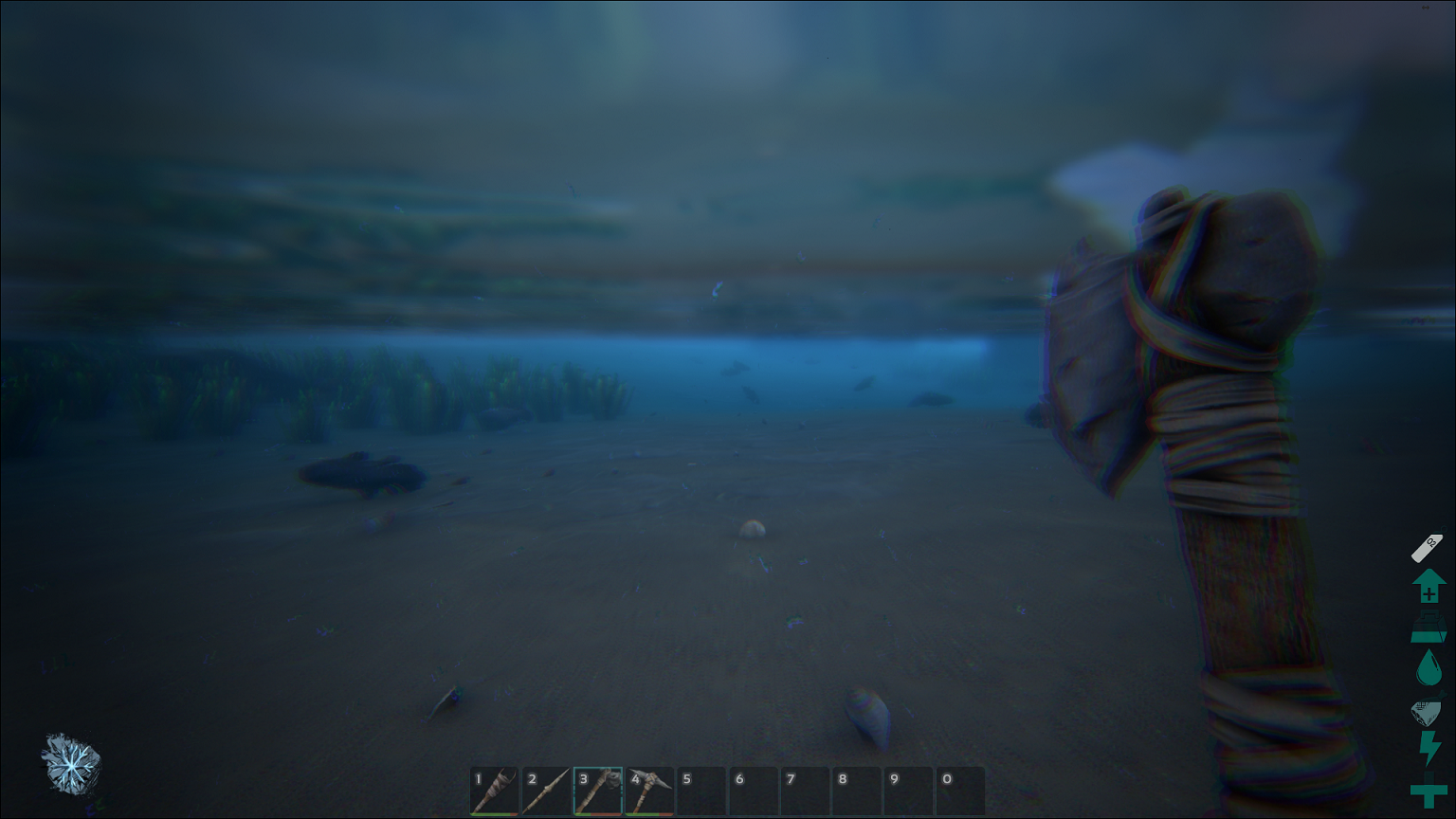 Death is frequent. As if the elements alone weren’t enough, the entire landscape is one massive predator. Our tribe members died frequently, and we learned that it was just something we were going to have to deal with. We adapted by returning more expensive gear to the homestead sooner rather than later, so it could be preserved in the event of a death. We crafted backup armor and weapons. All fragile dinos were left at the base unless they were needed, while the tougher ones joined us on expeditions. Even so, 'ARK 'is not for the faint of heart. The learning curve is steep, especially as there is no tutorial. The PvP is especially brutal, almost to the point of excessive. While I love a good PvP fight, the mechanics of 'ARK' do not necessarily lead to good PvP fights. When you log off, your body remains in a sleeping state until you return. If your base is overrun and captured (and it probably will be, because your tribe is offline), the bad guys can abduct your body, force feed you narcotics, and keep you unconscious and imprisoned. When you return to the game, you will be comatose until your captors log off, and even then you may find yourself trapped in a cell you cannot escape, while your painstakingly crafted base has been reduced to rubble. All because you dared to log off. No thanks. Thankfully, there are PvE and private servers.

'ARK: Survival Evolved' is a very promising survival title. The genre is becoming increasingly crowded but 'ARK' manages to stand out because of its technical achievements, emergent gameplay, and rewarding mechanics. 'ARK' is due for release on PC, Xbox One, and PS4 in June 2016. The Early Access PC version is available now and can be ordered here.