Have Spacesuit, Will Travel: Diving Deep into 'Elite: Dangerous' on the Xbox One

Editor's Note: A full version of 'Elite: Dangerous' Game Preview for Xbox One is available as of this writing for the price $30.99 (£24.99, €30.99, order here). This impressions piece covers the full version, which as a Xbox One Game Preview title, should be considered pre-release.

After struggling with the tutorials in 'Elite: Dangerous', I decided to go deeper in and actually experience what the full game has to offer. I’m so glad I did. Good space sims can be tricky to find, but 'Elite' has managed to distill many disparate elements into one huge sandbox. From bounty hunting to piracy to exploration and more, this game has a lot to offer.

Having forgotten most of the controls in the scant few weeks since I tried 'Elite', I descended once more into the breach and was determined to be, if nothing else, competent at moving my ship around space. It is a work in progress still, but it is possible. The controls are difficult to learn and difficult to master. Frontier for their part has done an admirable job of trying to translate three-dimensional movement onto a controller, but this has required some condensation from the original PC mouse and keyboard controls. Naturally, without keys to instantly bring up things like the map or cargo manifest, you’re going to have to learn some button combinations. At the very least, most of these functions are not required in the midst of combat. 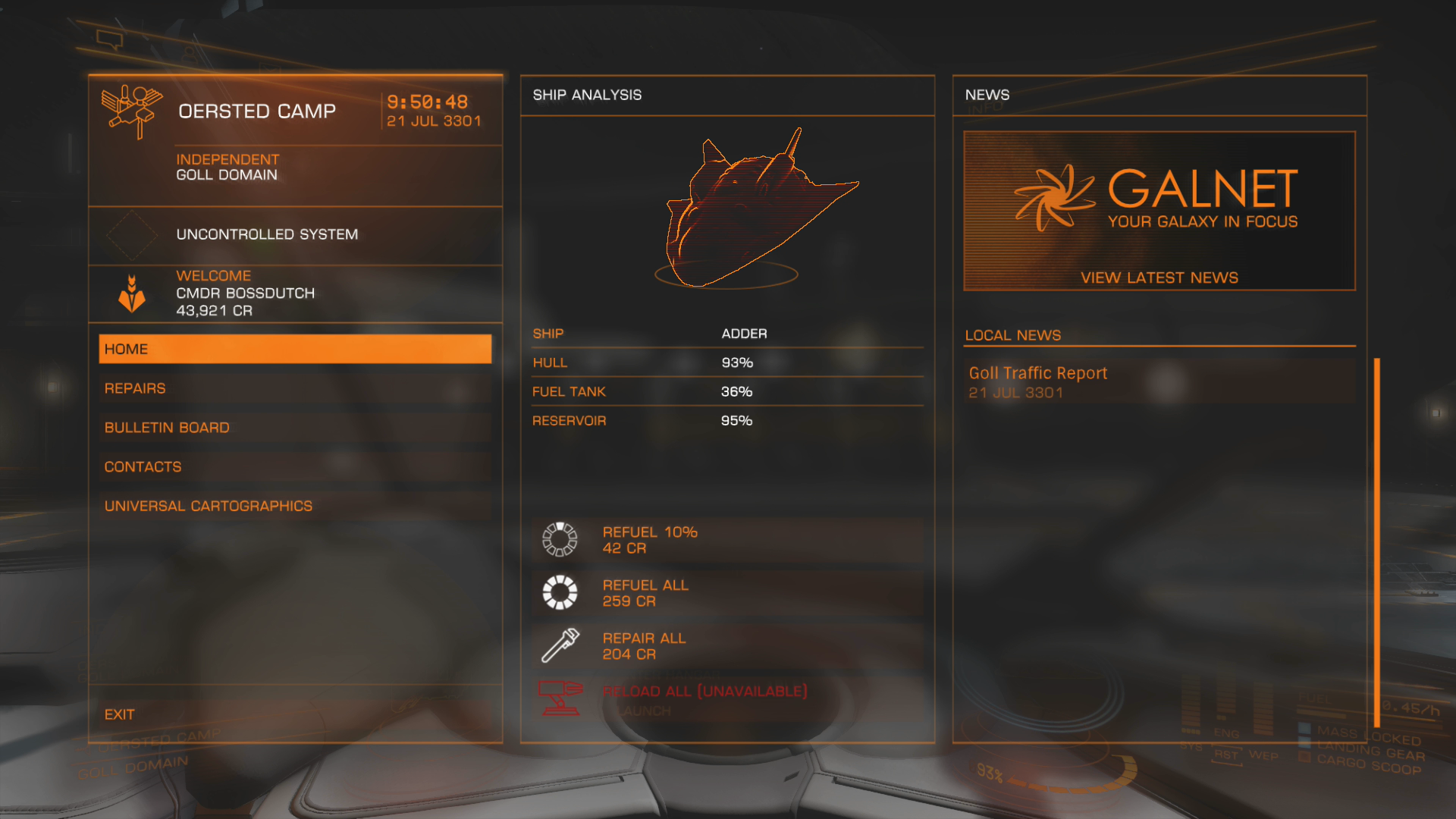 Once I had learned enough to exit a space station without exploding, I figured that was a pretty good qualification to become an explorer. With the few credits I had to my name, I upgraded to a modest Adder spacecraft from my trusty Sidewinder starting vessel and began to modify it. Modifying an exploration ship is more about taking things off than putting them on, it turns out. Silly scientific principles about mass and such are taken seriously here, so I stripped off most of the extraneous gadgets like cargo racks and weapons to lighten the Adder’s weight and let me travel further. I also slapped on two modules that changed everything - a fuel scoop and an automated docking computer. The autodock does just what its name suggests, which is a godsend because the docking process can be frustrating and, if the space gods frown upon a pilot, completely crush their ship and dreams. The fuel scoop is a siphon that allows a ship to suck up hydrogen (for free) from certain stars, permitting nearly limitless travel. Without it, ships need to dock periodically to refuel, keeping them tethered to civilized space. 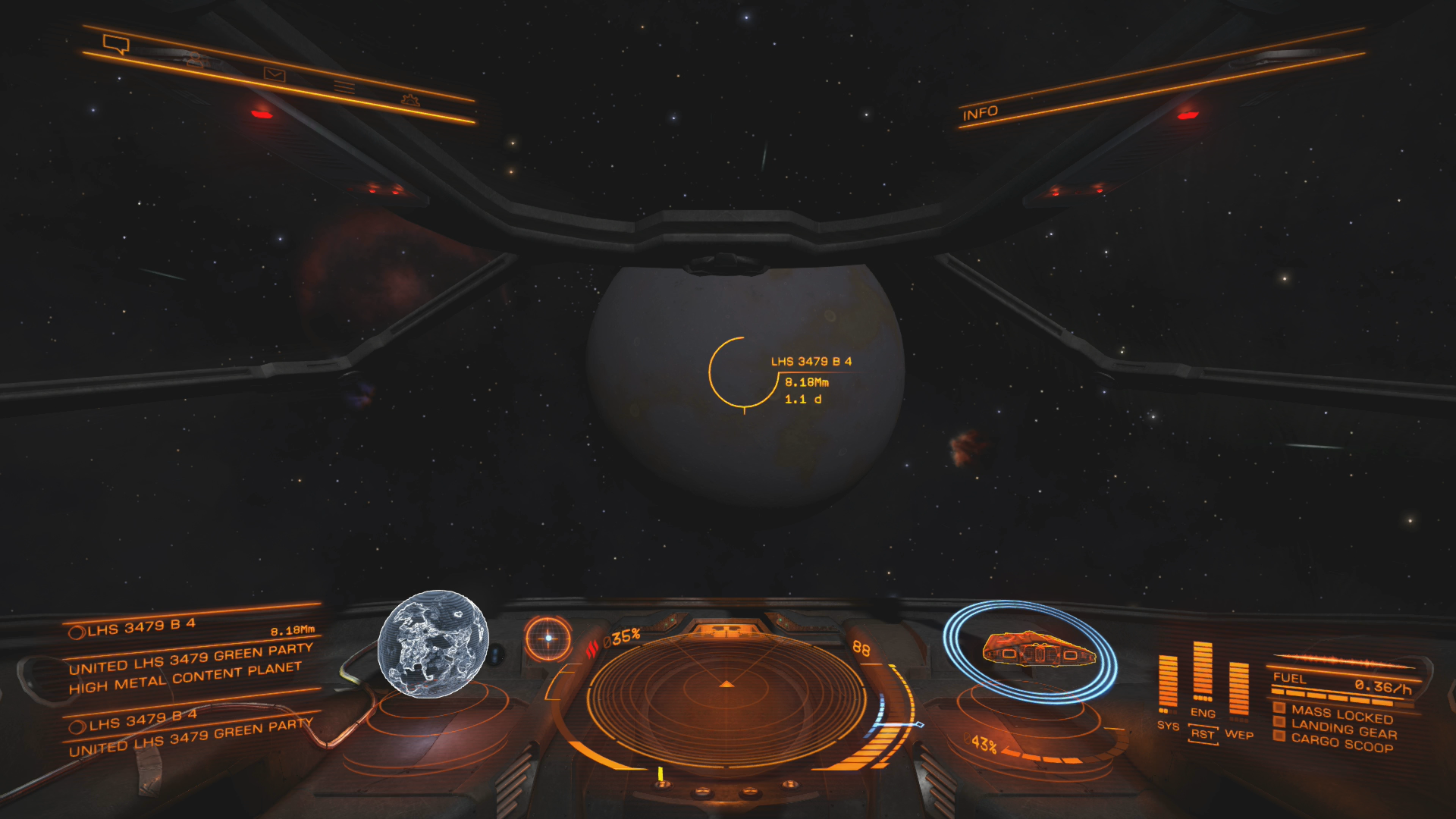 With the Adder ready, I undocked and plotted a course in space with the huge map and realized I had no idea what I was doing, and that was the best part of it. The galaxy in 'Elite' is a rough copy of our own Milky Way, with some 400 billion stars and a kajillion more planets and moons and asteroid belts. A very small fraction of these have been deliberately programmed to resemble real life astronomical data, and the rest are procedurally generated. Even as a novice explorer, it didn’t take long before I was scanning stars and planets that no one else had discovered. This is all temporary, as the Xbox and PC servers will eventually merge and the PC astronomical data will reign supreme. Still, being the first commander to find a planetary body, however remote, and having my gamertag attached to it is a fun reward. 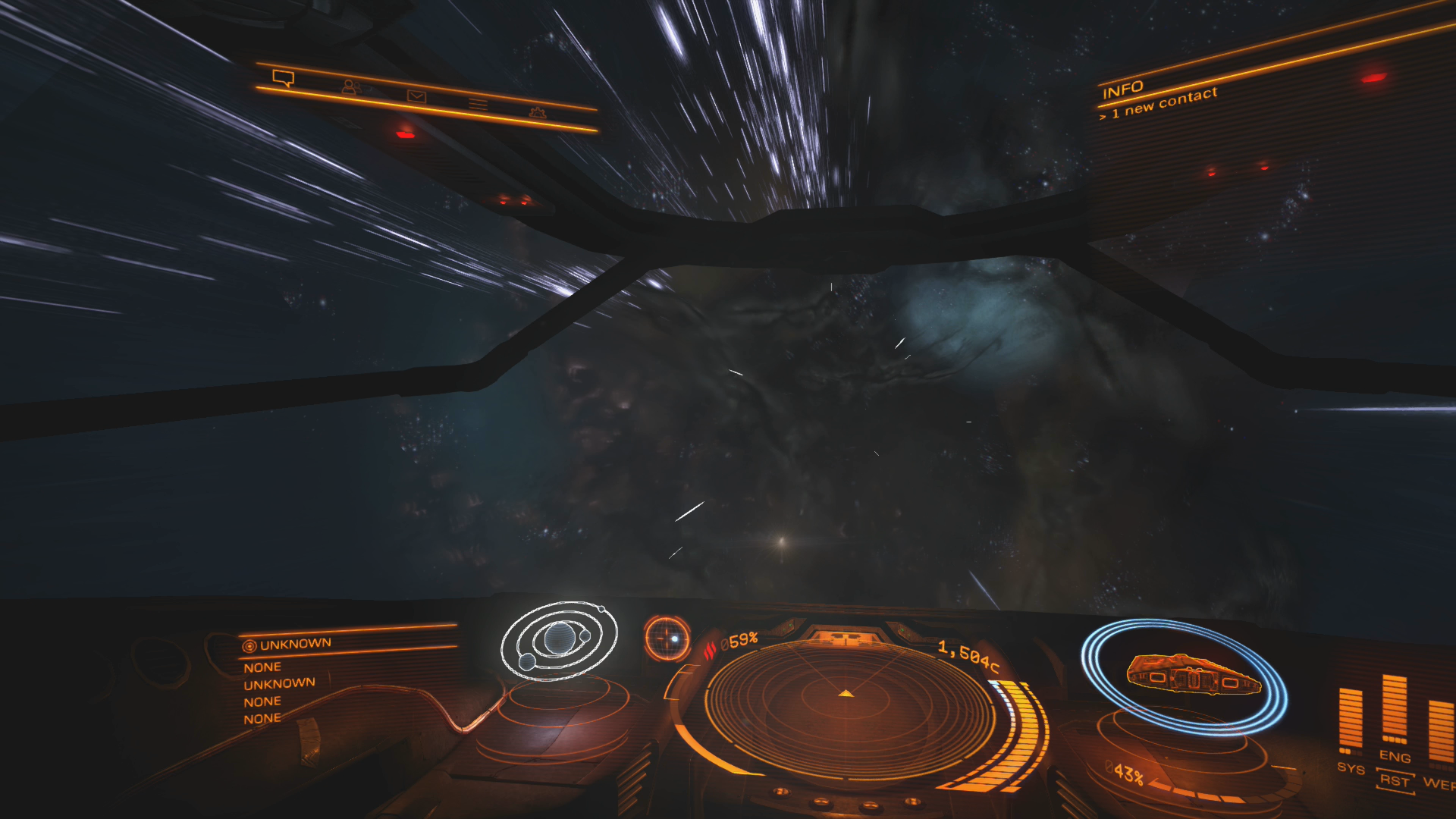 There are many professions outside of exploration, most of which are much less lonely. This includes but is not limited to: hauling/trading, combat (merc contracts, bounty hunting, assassinations), mining and refining, smuggling, and piracy. The galaxy has a very active economy that is influenced by player interaction, and ambitious space truckers can eke out a good living by tricking out cargo vessels and making long trade routes. Activities that would be considered griefing in conventional MMOs, such as forcibly seizing valuables from another player, are fair game here.

The ships themselves are very customizable. Weapons come in every shape and size, and can be turreted or gimballed to provide better tracking at the expense of damage. As I did with my lowly Adder, internal components can be binned to make space for other parts. Heat sinks and upgraded power plants provide protection against solar radiation when scooping. Additional cargo racks add more space for hauling. Shield generators and improved hull plating offer more resilience. Most modules can be micromanaged in space - the cargo hatch and sensors, for instance, add to heat generation and can be safely switched off while fuel scooping. Cargo can be jettisoned to distract pirates and make the ship lighter when trying to escape. 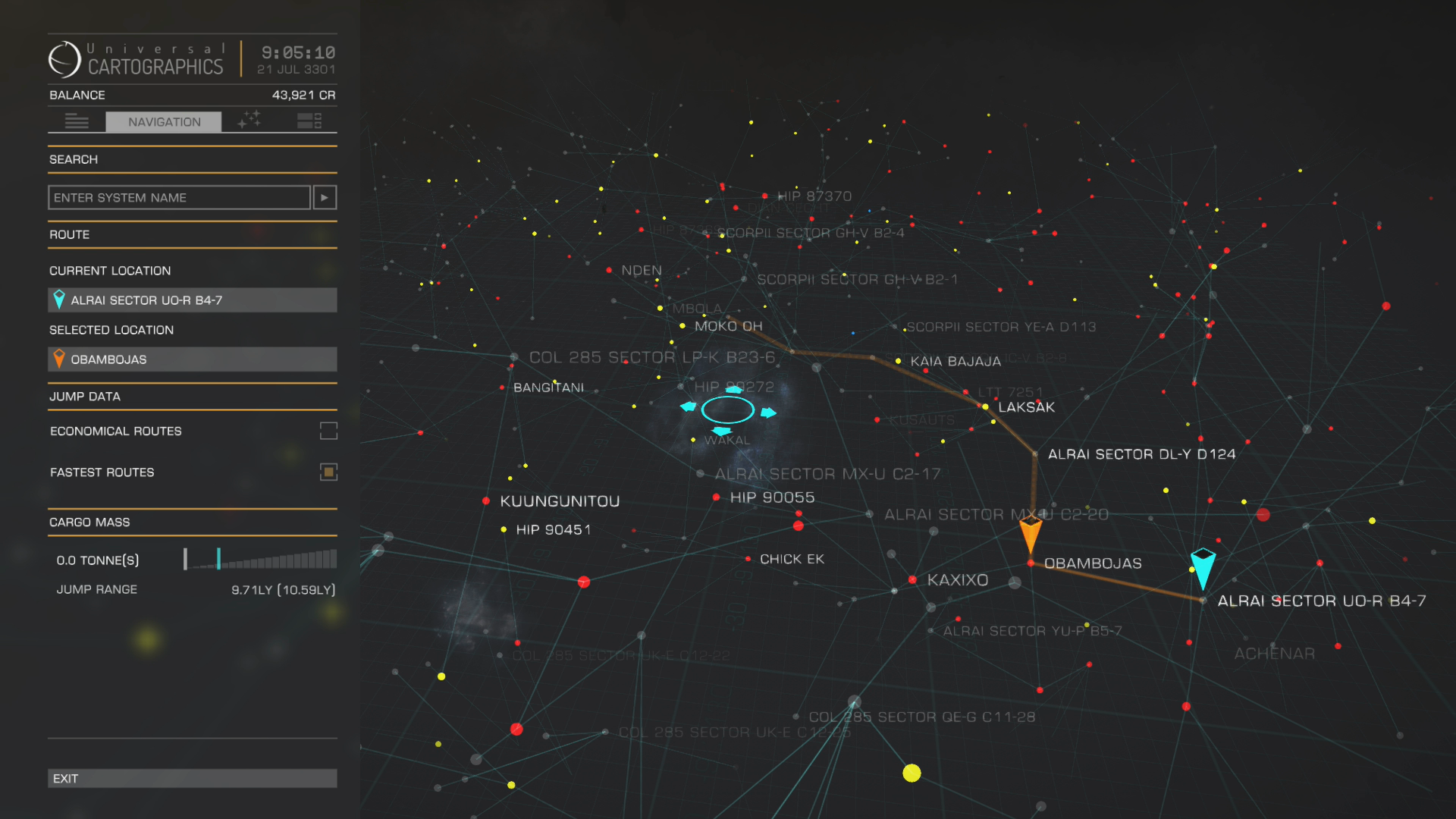 The amount of content and the freedom are extreme, but the game has serious struggles on the technical side. I had a crash once an hour or so during exploration (game crash only, not a total system crash). The engine slows to a crawl when entering hyperspace or bringing up a map. There is a lot of lag when navigating through menus at a station. Curiously, dogfighting is more stable, although there are still stutters. This is a preview build so it can be easily forgiven - it is not unplayable by any means. Also, as with any console title and the inherent lack of a keyboard, being social can be problematic. I occasionally typed a hopeful "Hello?" into the local channel of civilized systems while I explored, but the Xbox keyboard interface is cumbersome. There are no quick buttons for standard or custom messaging (I imagine a keybind for "Drop the loot or die" might be useful for a pirate), and no in-game wing recruiting system. There is an income bonus when working with other players, however.

'Elite: Dangerous' has been popular on PC and has the potential to be something really special on the Xbox One. During my time with the preview I had a 12-hour marathon with it and was sad when I had to turn it off, which is not something that happens with most video games. The crashes and stutters are well worth it for anyone even remotely interested in spaceships, and if the PC version is any indication, the final release build will be mostly free of such issues.