This month, we're covering an utterly unique TV mystery, a powerful biblical epic, and an experimental sci-fi drama.   Please be aware, that if you haven't already seen them, there are some spoilers for the discs listed.

If you can only buy three titles that hit Blu-ray in July, here's what we suggest you pick up, starting with the most essential... 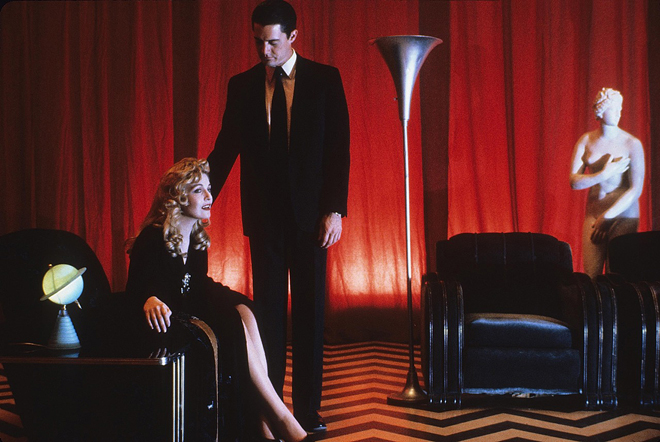 'Twin Peaks: The Entire Mystery' - "Harry, I have no idea where this will lead us, but I have a definite feeling it will be a place both wonderful and strange." And with those immortal words uttered by Dale Cooper, the writers behind 'Twin Peaks' essentially sum up the experience of watching the show itself. A highly influential and original piece of serialized storytelling, the series might be one of the most important TV shows ever produced. And it's also one of the greatest. Creators David Lynch and Mark Frost manage to weave an engaging murder mystery that defies all classifications. Dark, funny, and inexplicably weird, the series refuses to adhere to any one genre. Instead, it creates its own, taking audiences on an unforgettable journey into the woods -- where nightmares and reality blur into a red room with no entrance and no exit. But in this case, that's not really a problem. After all, why would you want to leave?

It all begins with a body. A dead body. Wrapped in plastic. Her name is Laura Palmer. She was the Homecoming Queen. She was loved by her community and appeared to live the perfect life. But appearances in 'Twin Peaks' are not always what they seem. And neither are the owls. Through the mystery of Laura Palmer's murder we are introduced to a town full of quirky characters and ominous secrets, leading to a complex and enthralling web of good and evil. Hopelessly optimistic FBI Special Agent Dale Cooper (Kyle MacLachlan) serves as our window into this bizarre new world, and through his eyes we encounter sights both disturbing and amusing, maddening and absurd. Indeed, perhaps more than any other show (or movie, for that matter), 'Twin Peaks' manages to balance an utterly manic tone that somehow always feels completely cohesive. At once an unsettling murder mystery, a melodramatic soap opera, a kooky comedy, an eerie supernatural thriller, and a tongue-in-cheek parody of everything it otherwise earnestly strives to be -- the show absolutely, unequivocally should not work. But it does. Brilliantly. Throughout its thirty episodes, we bear witness to eccentric townspeople, dancing dwarfs, backwards talking dreams, enigmatic giants, violent demons, gorgeous femme fatales, and plotlines that are both unrelentingly tragic and unashamedly silly. Under the wrong hands, this hodgepodge of seemingly incompatible ideas would cluster into an unsalvageable mess, but Lynch and Frost glue these pieces into an utterly original, esoteric masterpiece.

Contemporary television owes a heavy debt to 'Twin Peaks.' Everything from 'The X-Files,' 'Northern Exposure,' and 'The Killing,' to 'Lost,' 'Carnivale,' and 'True Detective' bears a clear influence from this series. Likewise, the show's genre-bending, serialized narrative and artistic cinematic style have helped to pave the way toward our current golden age of cable TV dramas. This comprehensive box-set from Paramount includes every episode of the show, tons of supplements, the feature length prequel movie 'Fire Walk with Me,' and about 90 minutes of previously unreleased deleted material from said film. In other words, it's everything a 'Twin Peaks' fan could want (myself very much included). As far as TV on Blu-ray goes, this is a must own in every sense of the word. So, grab "a damn fine cup of coffee" and prepare to travel back into the woods. It is a place both wonderful and strange. You can pick it up here! 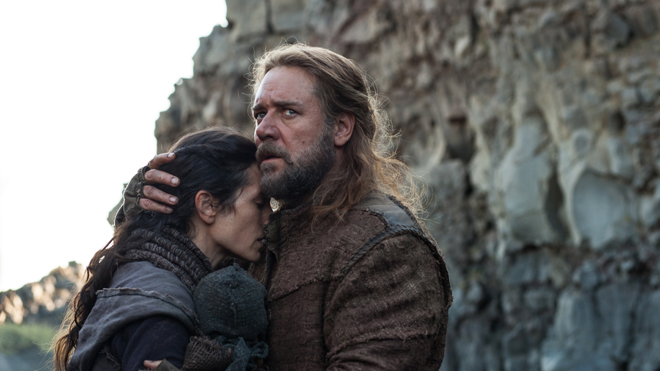 'Noah' - In the beginning there was darkness… and then of course the Blu-ray loaded up and the film began. But as Darren Aronofsky's controversial biblical epic played back before my eyes, I initially had no idea what to think. I was cautiously intrigued when the project was first announced, but the film's trailers did little to win me over. In fact, they made me want to stay away. Thankfully, now that the credits have rolled, my doubts have been assuaged, and while I'm not exactly a devout fan, the movie is an undeniably powerful and visually awe-inspiring experience. With religious parable as his starting point, the director is able to create a surprisingly deep examination of punishment and mercy, tackling ideas of sin, love, and freewill amidst an impossibly grand backdrop of cleansing waters and cosmic destiny. Also, there are lots of animals. Lots and lots of animals.

Through Aronofsky's interpretation, Noah becomes a painfully conflicted protagonist. Charged with an impossible task by his creator, we watch as the man is forced to increasingly bury his humanity in order to complete his sacred mission. Russell Crowe carries the picture with palpable anguish and steadfast resolve. And when moments of doubt do creep up, they prove to be heartbreakingly powerful. Throughout his teetering emotional rollercoaster, Crowe imbues the character with a carefully concentrated sense of duty, compassion, madness, and shame, and his overwhelming burden hangs heavy in every frame. Likewise, the rest of the cast is also very effective, and as the morally conflicted narrative continues to unfold we are often left unsure who to root for -- man, woman, child, beast, or god. To Aronofsky's credit, the filmmaker creates an unexpectedly complex rumination on wickedness, retribution, savagery, kindness, family, conservation, and healing, offering thought provoking layers of gray within an ostensibly black and white moral frame work. Beyond this engaging narrative, the movie's visuals prove to be absolutely stunning, engendering a mournfully apocalyptic mood that ebbs and flows into awe-inspiring crescendos. Quick montages economically reveal religious backstory, weaving breathtaking tales of serpents in Eden, malformed fallen angels, and the very birth of creation. The great flood sequence itself is of course a standout, and the director does not shy away from the horror it brings, resulting in a disturbing set piece that is likely to linger with audiences long after the raging waters have receded.

Though some viewers have taken issue with several aspects of Aronofsky's approach, the filmmaker has accomplished a rare task by creating a biblical epic that has appeal to both believers and non-believers alike. With a stirring thematic backbone marked by concepts of guilt, innocence, corruption, and forgiveness, the movie tells a timeless story about humanity's dual nature and its questionable worthiness to exist. More than just a special effects extravaganza or a preachy Sunday school lesson, the film uses religious allegory to tackle morally ambiguous ideas in a visually arresting style. The Blu-ray features demo worthy video and audio, as well as a few worthwhile supplements, rounding out a stellar release that commands a spot on July's must own list.    You can pick it up here! 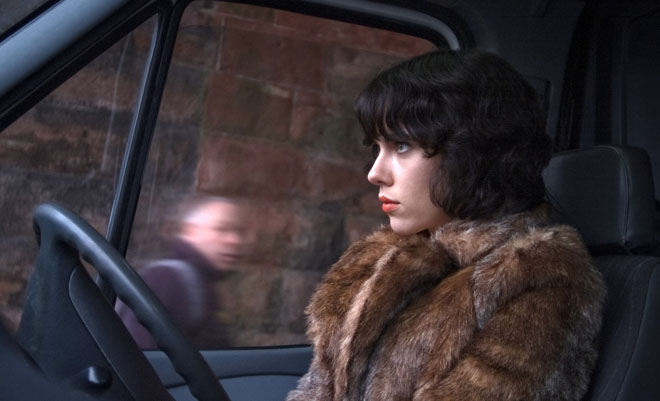 'Under the Skin' - Sexuality can be a dangerous tool. At its most superficial, it can lead to exploitation and manipulation. And at its most raw and passionate, it can lead to confusion and deep vulnerability. Through a heady but intentionally vague filter of science fiction mystery, Jonathan Glazer's dreamy and unsettling 'Under the Skin' examines these very concepts -- using an alien seductress as a means to probe deep into the complicated world of human sexuality and identity. Marked by an esoteric visual style and an isolated, haunting mood, the movie mixes actual hidden camera documentary footage of its star with absorbing sci-fi imagery to create a multifaceted and affecting meditation on our species' tragic longing to connect -- both physically and emotionally.

When we first meet Johansson's nameless character, she is nothing but a seductive predator -- a facsimile of a person fueled only by a primal necessity. She preys upon unsuspecting men, luring them into her trap, using smiles and flirtations to put them at ease, but there is no person behind the facade. She is an approximation of a woman, skilled at pleasantries and superficial sexuality but bereft of empathy or depth. She is an empty thing. But it seems that one can only wear a face for so long, before it starts to feel real. As the filmmakers point out in supplemental materials, the movie focuses on a character who goes from being an "it to a she," and Johansson plays up these gradual emotional turns with remarkable subtlety and complexity. Likewise, Glazer's narrative and visual approach perfectly complements his enigmatic and dangerous protagonist, essentially stripping away any semblance of verbal exposition in favor of a purely visceral form of storytelling. Dialogue is sparse and nothing is ever explained through words. But there is still a clear method here, and as we bear witness to the alien's process, we learn all that we need to learn through disturbingly dreamy images alone.

At its core, 'Under the Skin' actually tells a surprisingly straightforward story: An alien succubus preys upon human men until she gradually learns what it's like to be a person. But the director's approach couldn't be further from straightforward. Using visual style as a means of expressing meaning and tone, Glazer emulates the seduction, mystery, horror, loneliness, and confusion of his protagonist through the very tempo and form of his images and editing. Experimental in execution, the film becomes a fascinating mixture of stark reality and cryptic science fiction, finding a layer of uncommon truth within its cinematic dream world. Though some viewers may be put off by the film's unconventional approach and disturbing imagery, this is one of the genre's most original and affecting efforts in quite a long time. For those who enjoy challenging art house sci-fi, this is a clear must own.   You can pick it up here!

So, there you have it. While there are many titles worth picking up this July, those are our top three must own recommendations. We'll be back next month with three more essential picks, but for now, what do you think of our selection? What are your choices for July's must own titles?