This month, we're covering a blockbuster sequel, a disturbingly hilarious true story satire, and a twisting con-artist caper. Please be aware, that if you haven't already seen them, there are some spoilers for the discs listed.

If you can only buy three titles that hit Blu-ray in March, here's what we suggest you pick up, starting with the most essential... 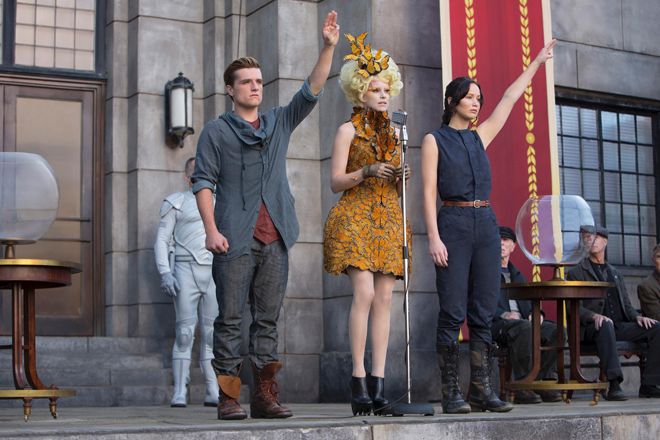 'The Hunger Games: Catching Fire' - It's not easy making a sequel -- especially when it's the follow-up to a hugely successful blockbuster. Far too often, studios have a tendency to play it safe out of fear that they will lose whatever magic recipe made the first installment so popular. This leads to many distressingly familiar sequels that simply refresh the original film's plot in slightly new variations. I like to call this phenomenon, the "Home Alone 2 Syndrome." Sure, Kevin gets to play in a big new city, and we do trade in that creepy old man with a shovel for a creepy old lady with a lot of birds, but the damn movie is basically the same! Many contemporary efforts have fallen victim to this type of lazy rehashing as well ('The Hangover: Part II' comes to mind), but thankfully the filmmakers behind 'Catching Fire' mostly avoid this devastating pitfall. Sure, the movie evokes many of the elements that made the first film so great, but it always places a new spin on these plot points, set pieces, and ideas, expanding upon the series' world while moving forward in exciting new directions.

Picking up where the first film left off, we eventually find Katniss (Jennifer Lawrence) and Peeta (Josh Hutcherson) forced to partake in another Hunger Games, but their previous actions from the original movie are not simply shrugged off. Plagued by PTSD, they still struggle to cope with the bloodshed that they were made to endure, and there continue to be serious repercussions for their unconventional win, setting off far-reaching effects that neither could anticipate. Concepts dealing with propaganda, celebrity, and exploitative control litter the runtime, and throughout the film we watch as the fires of rebellion are slowly ignited. The dystopian sci-fi setting and themes aren't quite as complex as other efforts in the genre, but the filmmakers do a great job of gradually evolving the world while tackling legitimately thought-provoking ideas. Of course, there's also plenty of action and romance as well, thrusting our heroes into more dangerous kill-or-be-killed scenarios while love triangles suddenly grow into love squares, or even pentagons (if this rate keeps up, I fear we may find ourselves in a full on love dodecahedron by the time the series ends).

Throughout it all, Jennifer Lawrence continues to shine, and though the whole cult of JLaw is dangerously close to overexposure, she really is a phenomenal actress. With her gripping charisma in the lead, the film weaves a dark but hopeful tale about the power of symbols and the birth of ideals worth sacrificing for. It's rare for a mainstream blockbuster to offer more than just superficial spectacle, and thankfully layered beneath all the crazy makeup, bizarre hairdos, and elaborate beards of the Capital, there really are worthwhile themes here. While the ending is a bit disappointing (the story basically just stops without any real attempts at resolution) this is clearly just one part in a continuing tale that looks more and more promising. The Blu-ray release from Lionsgate is top-notch, offering a fantastic home theater experience and lots of great supplements. Packed with demo worthy visuals and audio, genuinely great storytelling, and demographic shattering mass appeal, this disc manages to represent its district well, beating out the competition to win March's top spot. 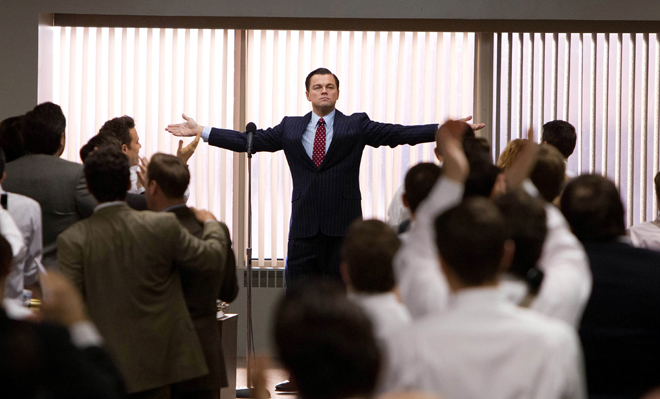 'The Wolf of Wall Street' - There's a particularly noteworthy sequence in Martin Scorsese's 'The Wolf of Wall Street,' where our protagonist throws an elaborate office celebration full of unruly debauchery, complete with strippers and a scantily clad marching band. On the surface, the grotesque absurdity of the entire scenario is undeniably funny, but as the depravity gradually escalates more and more, the lights suddenly start to flicker and the sound begins to distort. A competing music track plays out over the already boisterous band, turning the mix into a boomy cacophony of dissonant melody and overwhelming background clatter. What once was merely harmless frivolity now takes on a more sinister air, and for the first time it becomes clear that there is a darker undercurrent beneath all of the film's outrageous comedy. This isn't just a party; it's a horror show. A disturbingly hilarious expose on greed, excess, and superficial success, 'The Wolf of Wall Street' is both riotously comical and deeply unsettling, forcing audiences to reconcile their own conflicting emotions.

The film's explosion of indulgence has been the source of quite a bit of controversy, and some viewers have interpreted the copious amounts of drugs, sex, and greed to be too playful and celebratory in nature. But while the director does indeed find a generous helping of potent comedy within all of the movie's scandalous corruption, the true genius of the film lies within its incredible ability to blur the line between laughter and discomfort. With few exceptions (including the aforementioned marching band scene), Scorsese very rarely presents any of the characters' unsavory actions in an overtly critical light, leaving it up to the audience to make their own conclusions and judgments. There are times when it's hard to tell if one should be laughing or looking away in disgust, and when the laughter does come, we're often left questioning what it is we're really laughing at and why. This masterfully composed satirical tone is then complemented by a lively cinematic aesthetic that builds upon the director's previous works like 'Goodfellas,' highlighting all of the decadence with appropriately flashy and exaggerated style.

Even at its three hour running time the movie maintains a steady rhythm, and during the rare moments when the pace does start to drag, the film quickly changes gears and finds a second wind. Easily one of 2013's best pictures, 'The Wolf of Wall Street' somehow finds an unlikely balance between comedy and darker realities which lurk just beneath the surface. Through its larger-than-life (but still mostly accurate) examination of excess, the movie revels in extravagance while simultaneously revealing the inherent emptiness that comes with it. We don't get much in the way of special features here, but the Blu-ray does feature an impeccable technical presentation. Add in an amazing performance from Leonardo DiCaprio, Jonah Hill's ridiculous fake teeth, Matthew McConaughey's amusing chest bumping, and Margot Robbie's sizzling screen presence, and this release instantly becomes a must own. 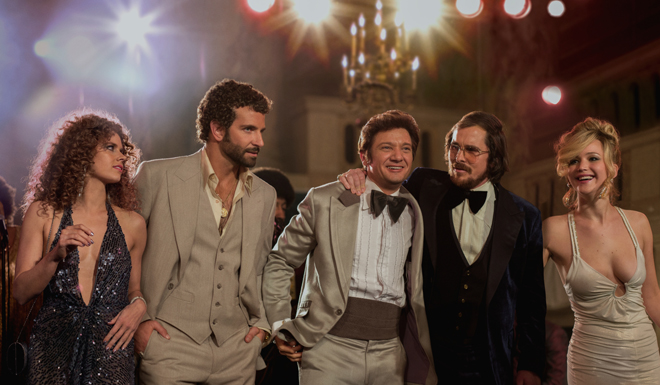 'American Hustle' - A film's opening shot can be very important. After all, it's literally our first window into the movie's world, establishing the tone for all that follows. In the case of David O. Russell's 'American Hustle,' the opening shot focuses on a balding, overweight conman as he meticulously styles an elaborate (and truly horrible) combover. In other words, it's perfect. More than just a slightly absurd, hilarious image, the shot instantly reveals the great lengths to which the characters are willing to go to in order to keep up their chosen facades, expertly setting the stage for the wildly entertaining, deceiving, and twisting crime caper that is about to unfold before our eyes. Smart, playful, and full of personality, the flick is pure cinematic fun.

Led by an incredible ensemble made up of Christian Bale, Bradley Cooper, Amy Adams, Jeremy Renner, and yes, more Jennifer Lawrence, the movie's characters simply sizzle and spark off of one another. The chemistry between the entire gang is electric and Russell helps steer them all toward award caliber performances. Bale's physical transformation is impressive by itself, and he totally nails Irving's conman persona without losing a genuine sense of heart and morality all his own. Likewise, Cooper's madcap intensity is perfectly honed in and unleashed to great comedic effect, and Renner manages to elicit genuine sympathy for his character's well-meaning intentions. While the men are all great, it really is Adams and Lawrence who end up stealing the show. The latter's unpredictable behavior is a cringe-worthy joy to watch, and Adam's fake British accent is a source of constant amusement. Together, the group creates a wildcard atmosphere full of constant reversals, betrayals, and deceits -- both professional and personal. This is a movie where every character's true intentions constantly remain shrouded in ambiguity and trickery, and often even to themselves. For his part, Russell seems to relish all these twists and turns with childlike enthusiasm, littering the picture with a blistering style that evokes past efforts by Martin Scorsese and other 70s caper flicks.

Though one of 2013's most enjoyable films, there are times when the editing feels a bit clunky and rushed, almost like Russell needed a little longer to more finely tune his creation. With that said, this slightly unruly quality actually helps to enhance the movie's tone, playing up the inherent chaos of the scheming characters and winding plot. Thankfully, Sony has given the film the high class video and audio treatment it deserves, though supplements are once again a little light (what gives, studios?). It may have been shut-out at the Oscars, but this is a great film through and through, making it a perfect fit to cap off March's essential picks. So, grab a nice spot on the couch, throw a bag of popcorn in your science oven and enjoy (but please, just make sure not to put in anything metal)!

So, there you have it. While there are many titles worth picking up this March, those are our top three must own recommendations. We'll be back next month with three more essential picks, but for now, what do you think of our selection? What are your choices for March's must own titles?