The fourth standalone board game in CoolMiniOrNot and Guillotine Games’ hit zombie killin’ franchise is finally here! This time, things get more than a little medieval in what may very well be the best ‘Zombicide’ adventure yet.

I’ve heard good things about ‘Zombicide’ for a few years now, but since I had already owned a couple of other zombie-themed board games, I didn’t really feel the need to add one more to my collection. But when I saw the ‘Zombicide: Black Plague’ Kickstarter campaign launch last summer, I just couldn’t stop myself from jumping in and making a pledge. I’m glad I did because this is a fun and tension filled game that really captures the essence of a zombipocalypse.

Unlike the previous three games which are set in modern times, ‘Walking Dead’-style, ‘Black Plague’ is set in a fantasy universe more akin to ‘The Lord of the Rings’ or ‘Game of Thrones’. This sword and sorcery spin creates an entirely new world of possibilities as it enlists the help of elves and dwarves and even conjures some up magic to battle the unrelenting undead horde. 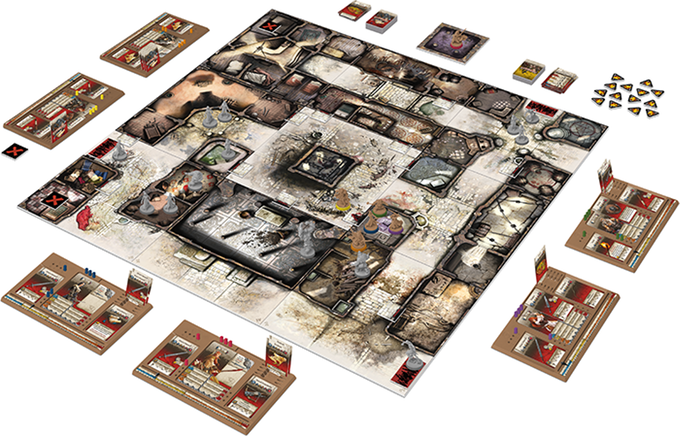 The game itself functions pretty much the same as the other ‘Zombicide’ titles that have become so popular. After choosing and setting up one of a variety of quests provided in the rules booklet, one to six players assemble a team of heroes/survivors who must work together to complete the objective(s) while fending off wave after wave of bloodthirsty zombies. If the players can hold out long enough to complete their mission, they win the game. 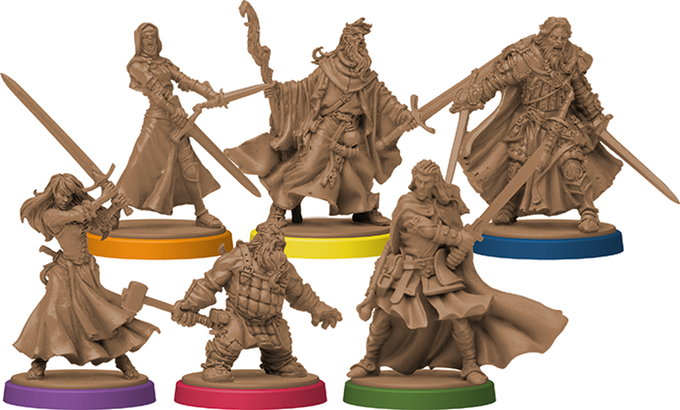 On his or her turn, a hero is given up to three actions. Actions include moving from one zone to another, smashing open doors, searching for equipment, reorganizing and/or trading equipment, attacking or casting spells, or even just making noise to lure zombies away from a defenseless ally. Every hero also starts with a unique special ability and can even gain new ones as he or she becomes more experienced over the course of the scenario. 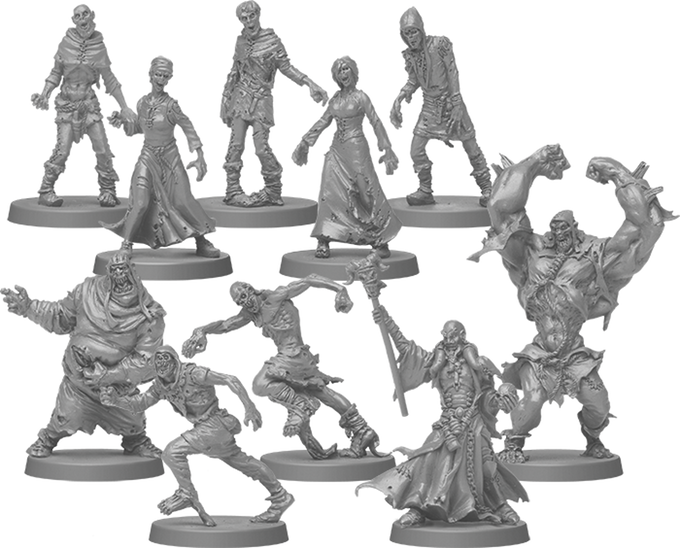 Once the heroes have all taken their turns, all the zombies in play will activate. Zombies come in a few varieties: Walkers (the most common and easiest to kill), Runners (speedy undead that activate twice), Fatties (tougher than both Walkers and Runners, requiring more powerful weaponry to remove from the board), and Abominations (deadly behemoths that can usually only be killed by Dragon Fire, so be sure to search often!). Zombies will either move towards the closest living prey they can see and/or hear, or attack if their activation begins in the same zone as a hero. New waves of zombies then spawn at all the designated spawning points on the board. Zombies also spawn in rooms of buildings the first time they’re opened and explored, and players never know which kind or how many will spawn until they draw and consult a zombie spawn card.

One of the most notable changes ‘Black Plague’ has over the previous versions is the introduction of the hero dashboards. These plastic trays keep track of everything from hit points (top left), experience levels (along the bottom), special abilities, and the various equipment that’s either being used by a hero or located in his backpack (top right) in a very organized manner. I wish more games came with things like these. They are both cool looking and functional at the same time. 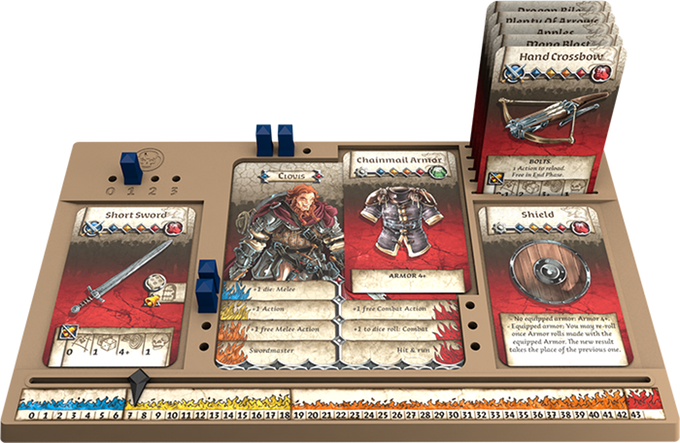 ‘Zombicide: Black Plague’ also adds a new type of enemy to the game: Necromancers. Necromancers are spawned like zombies, but they also bring new spawn points with them, making the scenario even more challenging. Necromancers can also cause players to lose if they escape the board under certain conditions. Fortunately, Necromancers can be killed, and once their blood is spilled, players get to remove any spawn point on the board as a reward. Any means of slowing down the onslaught is welcome indeed.

What I really like about ‘Zombicide: Black Plague’ is that the rules are explained clearly and concisely. In fact, every time a question came up during our gaming, the answer was quickly located when consulting the rulebook. Some game companies gloss over things, but that’s not a problem here.

Another thing that’s great about ‘Black Plague’ is the high replay value. As mentioned, the game comes with numerous scenarios, and in the past there have been some that you could download off the web site. An expansion called ‘Wolfsburg’ is in the works as well, which will add new heroes and zombie wolves that get triple actions!

The biggest selling point is probably the amazingly detailed miniatures that come with the game (pictured above). CoolMiniOrNot always goes the extra mile with its game pieces and these are definitely no exception. There are even a few different sculpts for each of the generic zombie types. They’re so impressive they may just entice you to paint them.

With its suggested retail price of $99.99, ‘Zombicide: Black Plague’ will put a bigger dent in your wallet than a lot of board games currently on the market, but you get a ton of content for that hefty price tag. Not only does the core game include 65 highly detailed zombie and 6 hero miniatures, it also has 9 double-sided game tiles, 50+ tokens, 125 mini cards and more. If you think ‘Black Plague’ is a game for you, it should be available in stores sometime next month. 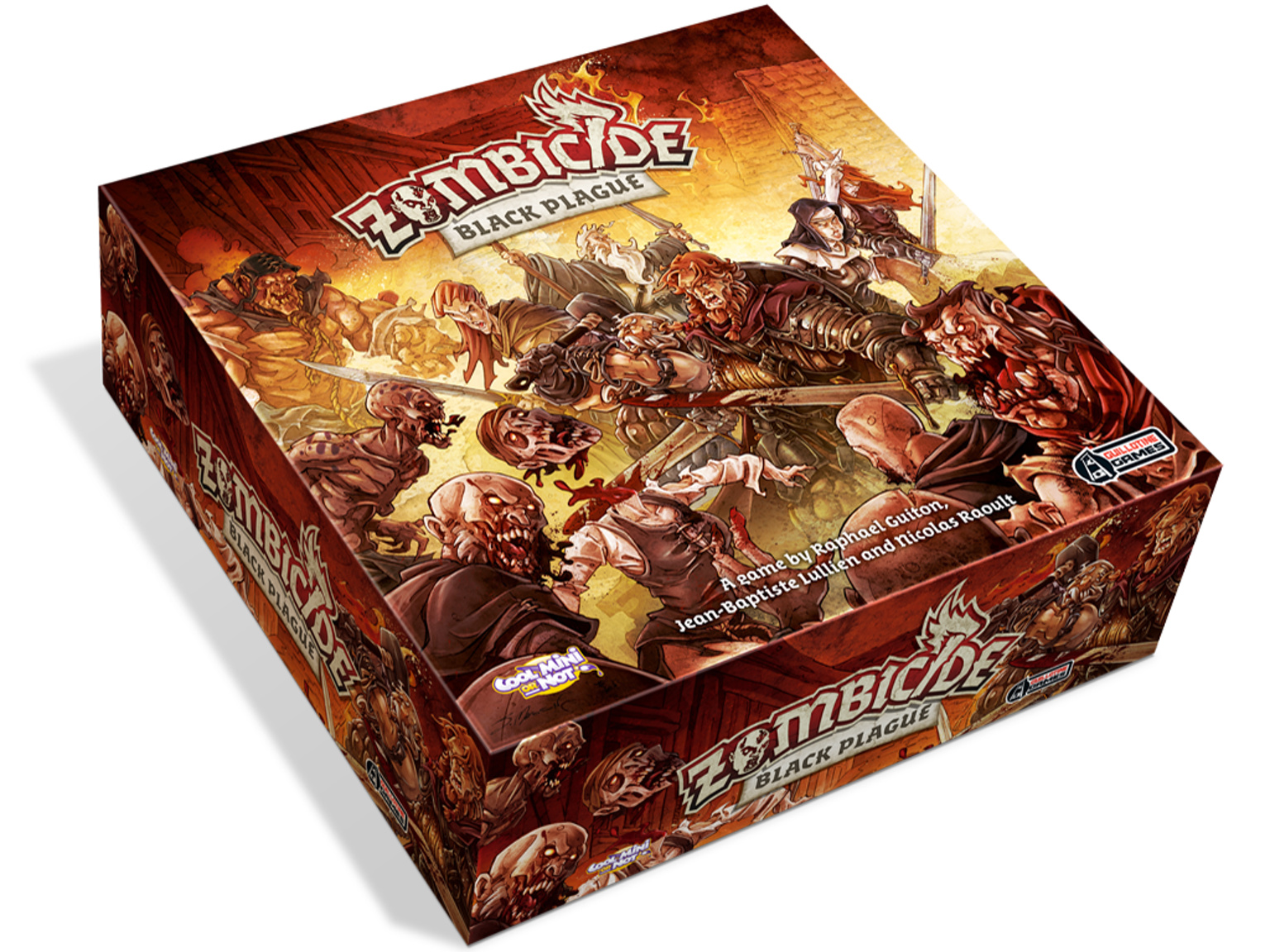