We’ve done Roundtables in the past about Favorite Monster Movies and Favorite Giant Monsters. Unfortunately, not every monster flick that Hollywood cranks out is a winner. This week, we give dishonorable mentions to some movie monsters that are just flat-out lame.

It would be so easy to go back to the lame sci-fi B-movies of the 1950s and ’60s and pick one of those poorly designed monsters (like the monster from ‘Robot Monster’, which was essentially a guy in a gorilla outfit with a deep sea diving helmet on his head). Instead, I decided to go modern and pick one from a movie I actually like quite a bit: JJ Abrams’ ‘Super 8‘. After teasing us through much of the film about an alien presence that has escaped a train derailment and wreaks havoc on a small town, the big reveal gives viewers little more than an updated version of the ‘Cloverfield’ monster (a movie Abrams produced) who isn’t really evil, just misunderstood and wants to get back home. Give me a break.

I know it’s a cult classic and that I’m likely to rub some the wrong way with this one, but my pick is ‘Attack the Block‘. I love the concept and the story of the film – inner city kids versus an alien invasion – but the lame design of the alien monsters has kept me from ever giving the movie a second viewing. I commend the filmmakers for opting for a minimalist creature design over something of terrible CG quality. However, the black nothingness creatures are a joke to me. Deep black silhouettes with hideous glowing CG teeth is a major turn-off. It’s as if they got into post-production and realized that they hadn’t thought of a creature design yet. For this one, I’d be in favor of someone pulling a George Lucas down the road and giving the movie the monsters it deserves.

I can’t think of lame movie monsters without thinking of Danny Boyle’s ‘Sunshine‘. On what is clearly a last-ditch mission fraught with practical issues and susceptible to combustible individual crew morale, Captain Magic Zombie Pinbacker appears to basically steal the joy out of an otherwise impressive feature.

Just as I about to write about ‘Troll 2’ featuring some of the dumbest monsters ever, I suddenly remembered the alien in ‘Signs‘ has those little forest creatures beat by light years. After the success of ‘The Sixth Sense’ and the surprise follow-up of ‘Unbreakable’, M. Night Shyamalan made a sudden left turn straight into traffic with a promising sci-fi thriller starring Mel Gibson and Joaquin Phoenix. For the first three-quarters of the movie, Shyamalan maintains a great level of suspense, and the build-up towards the climax felt as though we were in for an unforgettable showdown. Instead, the battle for the planet was a massive disappointment. The aliens, in their infinite wisdom, decided to invade a world covered in water without first knowing they were deadly allergic to water. And all that was needed to save the planet was a baseball bat and a living room with glasses of water everywhere. That is not only really dumb, but they’re by far the lamest monsters ever! 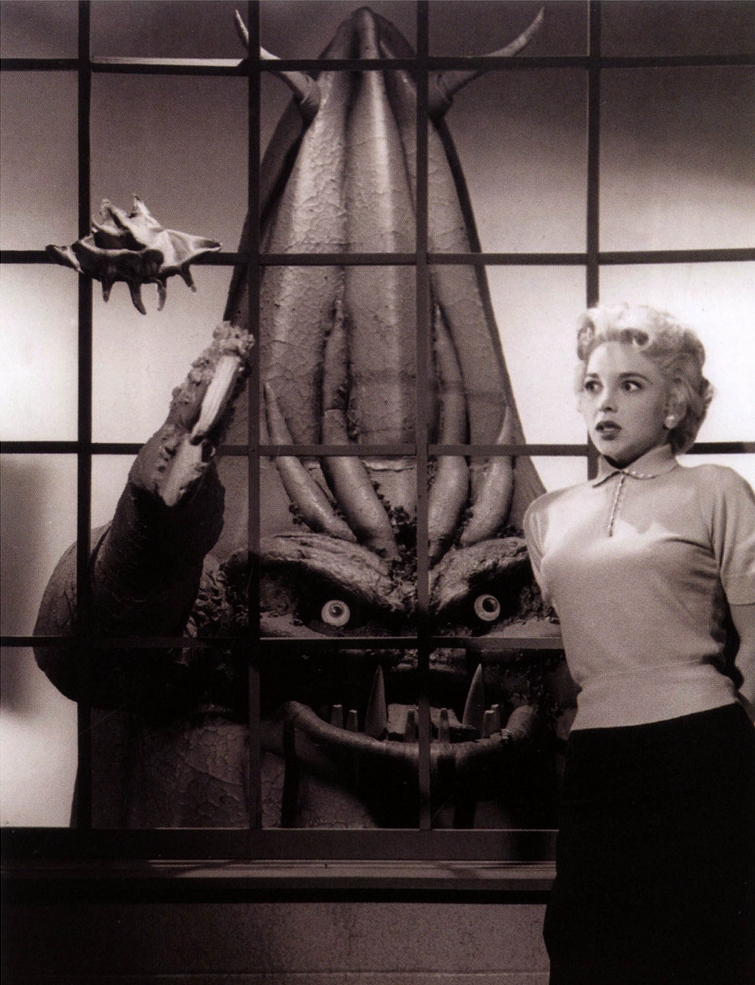 The story goes that when Beverly Garland first saw the Venetian invader in her latest fright flick, she quipped, “That conquered the world?” and promptly kicked it over. I can’t say I blame her. There is no other straight-ahead sci-fi/horror flick whose monster so consistently makes me burst into laughter as ‘It Conquered the World’.

Believe it or not, director Roger Corman did sincerely invest some thought and consideration into Zontar’s design. Corman figured that the creature hails from a large planet, so he’d accordingly be short and squat to best compensate for that heavier gravitational pull. Zontar wound up looking like a gigantic piece of candy corn, and he’s about as animated as one too. The only parts of his body that really move are his cartoonishly long arms. Zontar’s tiny, tendril-like legs barely wiggle, his eyes are locked forward, and his expression is frozen into place.

At the same time, I kind of love the little guy, and Zontar’s design is certainly unforgettable.

When I sent out the topic this week, ‘Super 8’ was the first thing I thought of. Shannon is so right about what a letdown the ending of that movie turned out to be. After that, I immediately thought of ‘Signs’, but E. was already on that same page as well.

It’d be too easy to pick on some no-budget B-movies from the 1950s, or even the 1980s, here. To my mind, the truly worst movie monsters appear in big-budget studio films, which pour tons of resources into all aspects of their production and have no excuse for getting something so basic wrong. The first half of ‘I Am Legend‘ – in which Will Smith tools around through an abandoned New York City as the last human survivor after an apocalyptic virus has devastated the planet – is actually pretty great. Then the hordes of CGI zombies that leap around all over the place in flagrant defiance of physics appear, and I totally check out.

Help us out here. Tell us about the other movie monsters that failed to scare you.