That doesn’t make it a complete failure, though. Yes, the script is riddled with clichés, and Rock is at about a 9 on the Chris Rock annoying scale, but the story is kind of fun. The movie is inter-spliced with live action bits that take place in the here-and-now, starring Bill Murray as a down-and-out loser of a guy. He’s the low man on the totem pole at the zoo, until one day he eats a bad egg (literally) and ingests a nasty bit of germ. The animated parts of the movie all take place on the inside, where we’re invited into the bustling world that is the internal metropolis of Bill Murray. 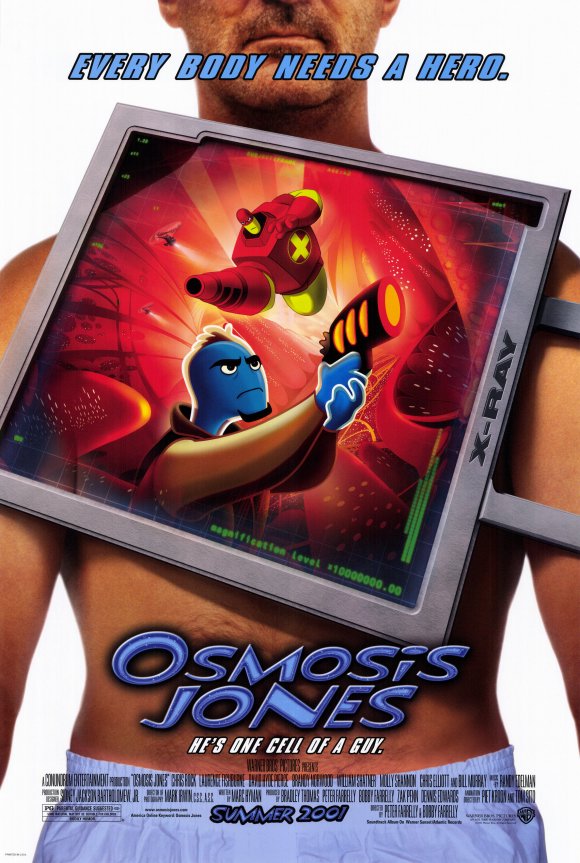 Fishburne plays the killer germ who aims to kill Bill as quickly and as horribly as he can. Chris Rock plays your standard young and ambitious cop who has goofed something up. Now no one trusts him, until his call to redemption arrives. David Hyde Pierce plays a wonderful character: cold medicine in pill form. Finally, Shatner portrays the Mayor of Bill Murray.

Chris Rock aside, the cast is magnificent, and there are a lot of great moments in this animated world. The writing is mostly top notch. Even some of the clichés are sort of funny, but the analogies comparing the real world to the internal one are the real stars of the show. Even the music is fun, and it’s in on the metaphors, including a dance remix version of Foreigner’s “Hot Blooded.” Unfortunately, all these parts can’t quite make this film work. The live action parts are jarring and totally destroy the pacing. Bill Murray pretty much phones this one in. He looks absolutely terrible and gets worse as he becomes sick. Not to mention that there are some pretty disgusting parts that don’t move the story along at all.

Streaming the movie in HD, the live action scenes look pretty much like all the other flicks I’ve streamed for One from the Vault lately. It’s very plain and hardly better than standard definition. However – and the main reason I chose this movie for today’s article – animation always looks better in HD, right? Yes, it does. While not nearly up to Blu-ray specs, colors are very well saturated and crisp. Blacks are deep, and line delineation is sharp. I was also impressed with how clear the animated image is, since the live action parts contain a lot of grain.

Of course, this doesn’t help much with enjoyment of the movie. The live action bits are the hardest to watch. A “Director’s Cut” with only the animated parts would be something nice for a special feature. Regardless, the nostalgia value for this one is low, despite great performances from Fishburne, Pierce and Shatner. But if you’re already a fan, this is certainly a worthy way to view ‘Osmosis Jones’ while you’re waiting for a Blu-ray version to be announced and released.