The hero of our story, Harold, walks out into his yard carrying a can of gasoline.  He climbs a platform, pours out the gasoline and lights the flame.  The theater, or room, full of people watching this laughs. ‘Harold and Maude’ is dark humor at its best.

(‘Harold and Maude’ is a pretty famous film and is nearly three decades old. But if you’re one of those people who’s still concerned about spoilers, you may want to watch the movie before reading further.)

To put it simply, ‘Harold and Maude’ is a comedy about a 19-year-old boy obsessed with death, and the free spirited 79-year-old woman that he falls in love with.  Harold is pessimistic and doesn’t seem to care about anything.  Maude is optimistic and in love with life. 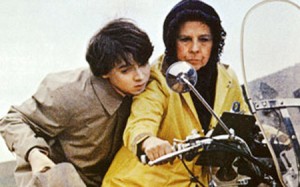 And that’s the problem with describing the movie in simple terms.  On the surface it doesn’t seem like anything outside of the norm, aside from the age difference.  Boy meets girl, worlds collide, and the boy is made a better person from the experience.  It sounds traditional.

It also sounds like a romantic comedy.  It is a comedy, I’ll give you that much.  And to be fair, there is romance.  But it’s dark and thought provoking, and so much more than what rom-coms ever aspire to.

But it’s not the story of the movie that makes it special.  If played by different actors, if filmed by a different director, ‘Harold and Maude’ could have ended up as just another forgettable movie.  With Hal Ashby at the helm, it’s anything but.

From the very beginning, Ashby makes us identify with Harold, who is constantly creating elaborate fake suicide scenes for his mother to find.  It sounds like an insurmountable task, but Ashby has us liking Harold within 5 minutes, or at least disliking his mother, which amounts to the same thing.

Once we’re on board with Harold, it’s not a stretch of the imagination to fall in love with Maude.  She may be 60 years older than him, but her positivity is infectious.  Maude makes

Harold feel good about himself, and it’s a feeling that spreads to the viewer.

Ashby plays on audience expectations beautifully.  In the first scene, when Harold is hanging himself, there’s no reason to believe it’s not real.  We think we’re seeing a suicide until his mother’s reaction reveals otherwise.

From that point on, we delight at Harold’s twisted scenes, and laugh at the reactions of those characters in the movie that aren’t in the know.  When he finally brings Maude into the equation and fakes a murder, death becomes playful.  We no longer fear it.

Until, of course, Maude herself commits suicide on her 80th birthday.  It’s not out of grief, you see, but out of the firm belief that 80 was the perfect age to die.  Once Maude is gone, the rules change, and we’re not sure anymore.

So when we see Harolds converted Jaguar hearse flying off a cliff shortly afterwards, it’s really hard to tell what to believe.  Could it be that Harold is actually killing himself?  We have no idea, and it’s a much stronger scene because of it. 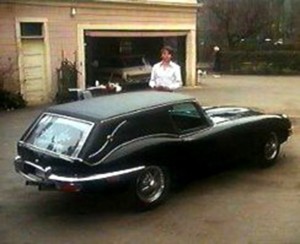 The other thing that makes this movie so effective is the soundtrack provided by Cat Stevens.  The music is present throughout the film, and it’s even sung by the main characters.  The song heard most in the film is “If You Want to Sing Out, Sing Out,” and it’s a fantastic song.

In a way, the audio and the video are a paradox, just like Harold and Maude themselves.  The visual aspect of the film is, with a few exceptions, a fairly somber affair.  Even on sunny days you’ll see plenty of clouds.  The music is in clear opposition to this, offering up hopeful lyrics and bright chords.  It’s only towards the end that the days get a bit brighter and the world a bit cheerier.

You can find the film, if you’re so inclined, on DVD for around $30 new.  There’s not much of a need to, though, since the Netflix stream is in a 16:9 aspect ratio and presented in high definition.  Until a Blu-ray comes out, this is about as good as you’re going to get.

‘Harold and Maude’ is the only film of Ashby’s good years (1970 – 1979) that didn’t receive recognition from the academy, which is a shame, since it’s my personal favorite.  If you enjoy it, make sure you check out ‘Being There,’ another of Ashby’s best flicks.  It’s available to stream in standard definition, and on Blu-ray.

TagsHarold and Maude Netflix One from the Vault