I generally like season finales.  They provide closure, and they’re usually pretty funny too.  It’s a great way to say goodbye for a few months.  This week’s episodes weren’t finales though.  They were those cliffhanger shows before the finales that end up being full of a lot of setup and not a lot of humor.

Community – ‘English as a Second Language’

‘Community’ started out well enough.  The sound gags over the intercom were pretty good, and I got to identify with Britta over her “Avatar moment.”  But aside from a few great bits with Abed and Troy, it was a pretty dull episode from there on out. 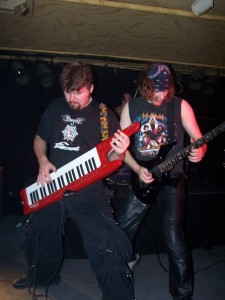 The ‘Good Will Hunting’ reversal – Troy showing a lot of promise as a plumber – was pretty funny.  After it happened the first time, you knew where the jokes were coming, but it was still enjoyable.  Jeff’s breakdown was fun too, calling out Annie on her “Disney Face.”

As far as the Señor Chang thing goes, I hate when I have to be “that guy,” but keytars don’t work that way.  Most keytars don’t have built-in speakers, and the Roland AX-Synth, which is what Chang was playing, sure doesn’t.  So those scenes where the keytar is making noise on its own without an amplifier just plain bothered me.  And I should know about keytars; I played keytar for a heavy metal band.  No, that’s not a joke, I totally did.  That’s me in the picture.

Can we please have Rob Lowe back on?  His character, and his performance, worked very well with the staff of the parks department.  Pointing at each person he met and repeating their name back, as if to memorize it, was a great touch, and the reactions were hilarious. 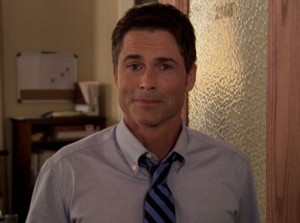 And it was nice to see Leslie actually get upset for once.  She doesn’t get mad often, and it’s a nice break off from her usual casual character.  It was a bit of a switcheroo, in fact, since Ron was happy for almost the entire episode.

The whole April and Andy thing is really starting to wear thin.  They’re great on screen together, but without resolution, we’re getting more of the same.  I did enjoy Andy doing math in his head, though. And of course April’s statement that she’s not as into drinking, now that she’s allowed to do it.]

There’s a producer’s cut of this episode on Hulu which runs almost eight minutes longer than the episode that made it to air.  Could be worth taking a look at!

I’ve been giving ‘The Office’ a pretty hard time this season, and I feel it’s been justified.  Even though ‘The Chump’ kept focus on Michael’s un-funny sex life, there were still a few gems inthe episode.

Though it’s a leap of faith to believe that the contract Dwight and Angela signed would actually hold up, I’ll give it the benefit of the doubt.  It was well worth it to have the terms read 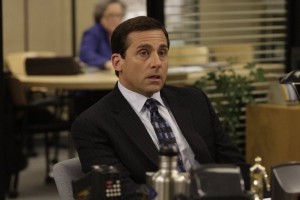 aloud.  The fact that Dwight put in a ‘Matrix’ clause was good for a laugh or two.

While the storyline about Pam and Jim being tired wasn’t particularly funny, it did take us back to reality.  Hey, I worked in a warehouse once, and yes, we had a spot to sleep.  It’s a nice setup.  Of course, Jim and Pam never got their sleep, because Dwight and Angela took that moment to meet back in their secret spot for a bit of “Afternoon Delight.”

The best segment in ‘The Office’ this week was probably the shortest.  There was a moment in which Ryan saw Michael’s attitude towards getting what he wanted and decided to follow in his footsteps, by trying to get Erin and Kelley into a three way.  Loved it.

Why do writers, producers, directors, and whoever else is in charge of this sort of thing insist on cliffhangers for the penultimate episode of every show?  ‘Modern Family’ got it right.  No cliffhanger, just a nice story that leads into the finale.

Aside from the fairly lame ending – which simply cut to “To Be Continued” – ‘Emmanuel Goes to Dinosaur Land’ was a fun episode. 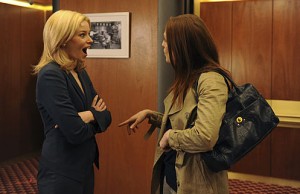 The “Jack Dongaghy can’t pick a woman” thing, just like the Andy/April thing in ‘Parks and Recreation’, is starting to get just a little bit old. But we got to see Liz revisit her old boyfriends, including Dennis Duffy, who was a welcome return.  The ‘Thunder Road’ like Dennis Duffy theme is always nice to hear, and his interactions with Liz are always entertaining.

We also got to see Wesley Snipes (Michael Sheen) again, who may be one of the most well-done annoying characters on television.  He’s supremely annoying, but you can’t help but want to see what he says next.

While the whole storyline with Tracy wasn’t particularly great, I could have watched him sitting in a stairwell yelling out crazy things he’s seen all day.  “I saw one baby give another one a tattoo!  They were so drunk!”