I think pretty much everyone was surprised when ABC renewed its alien invasion series ‘V’ after the first season. After high expectations, the show proved to be a cheesy mediocrity with a lot of bad acting, lame writing, and terrible visual effects. Despite its unspectacular ratings, the network must have felt that it still had potential. So here we are, eight months since the last episode, with the start of a brand new second season. Has the show gotten any better?

First, let’s get the plot of last week’s season premiere, ‘Red Rain’, out of the way.

As we last left things, human resistance leader Erica (Elizabeth Mitchell) had just destroyed most of the alien soldier eggs laid by V queen Anna (Morena Baccarin). Anna freaked out and launched what appeared to be a doomsday weapon that turned all of Earth’s skies red. The new season picks up a few weeks after that cliffhanger. The skies are still red, and Anna has cut off all communication between aliens and humans. Even though not much has happened except for the sky turning color, panic has set in on the ground. Riots and looting are common. This culminates in mass hysteria when a red rain starts falling. “The sky is bleeding!” someone exclaims.

Using annoying teenage son Tyler (who has been dating Anna’s daughter, Lisa), Erica manages to connive her way back onto the V ship. She demands an explanation from Anna, who assures Erica that everything is fine. Anna then finally breaks her silence to the world below with an announcement that the red rain is a gift to the Earth that will heal our environmental problems and reverse global warming. Peace and harmony are restored.

Erica remains skeptical, of course. Her investigation into what the Vs are really up to leads her to a young scientist named Sidney Miller (Bret Harrison from ‘Reaper’) who discovered an alien skeleton in an archaeological site that proves the Visitors have been poking around on Earth for at least 50 years. He’s also found that the red rain is loaded with phosphorous, which Ryan informs them is a big component in V breeding. This leads to the assumption that the Vs are seeding the planet to interbreed with humans. Erica then suddenly remembers that she had a buildup of excess phosphorous when she was pregnant with Tyler. Uh oh.

Back on the V ship, turncoat doctor Joshua has been revived from the dead by Anna, but has no memory of what happened – or any memory of being part of the Fifth Column resistance, for that matter. Six of Anna’s soldier babies survived the explosion Erica set, but are badly injured. To prove that she’s unburdened by human emotions, Anna heartlessly pulls the plug on all of them. The episode ends with her descending to the murky bowels of the ship, where we’re introduced to her mother, played by Jane Badler, the original alien bitch diva from the 1980s ‘V’.

So, with all that said, has the series improved any? Vaguely. If anything, it seems that the show’s producers have decided to embrace its cheesiness, which is probably a good thing.

The episode opens well, with Erica having a dream sequence in which she wakes up to find everyone else on the planet unconscious or dead around her. (The scene is more than a little reminiscent of ‘FlashForward’, the series ABC canceled in favor of this one.) She finds Tyler barely conscious, and then acid rain falls and melts his face off! The gore effect is pretty grisly for television, and a really fun, campy jolt. Also, it feels like a tacit admission from the producers that they know everyone in the audience hates Tyler and wants to see him die horribly.

Later, Anna must face off against the other ship captains, who are concerned that she lost her shit when her babies were killed. To prove who’s still boss, she whips out a giant stinger tail (that was somehow hiding along her spinal column or some nonsense) and stabs one of them to death in the face. Again, very ridiculous, campy and fun.

We finally get a glimpse of a lizard face beneath the human mask here. Though we still haven’t seen a Visitor completely in the buff yet, Anna’s tail plus the skeleton in Miller’s lab are enough to confirm that this production image revealed by USA Today was real. 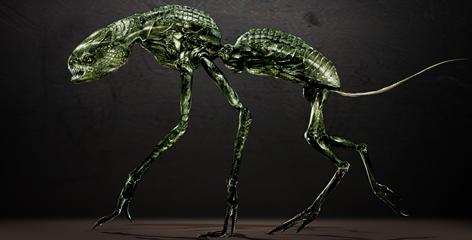 I have to believe that even the people who make the show much know how stupid this is. How could that monster with extended limbs and a long tail hide inside a human disguise? That’s just physically impossible.

For that matter, everything about the plotline in which the Vs want to mate with humans (which includes Ryan and his now-dead human girlfriend) is pretty dopey. Suppose for a moment that human beings could travel the galaxies, and eventually landed on a planet populated by four-legged lizard beasts that look like the above. Who would take a look at that and think, “Whoo hoo! I sure would like to tap that fine piece of ass”? Because that’s essentially what happens when the lizard people come here and want to have sex with us.

Speaking of which, perhaps the best moment of the episode happens when Anna pimps out her daughter and outright instructs her to screw Tyler to keep him on the hook. Then Anna watches the whole thing unfold on a video screen. Everything about this scene is totally twisted and perverse.

The bit where we’re supposed to think that Tyler may already be part alien is incredibly dumb, and does nothing to make us care about his character any more. The only even remotely worthwhile thing about his character is that his continued presence allows us to see Laura Vandervoort (Lisa) in sexy lingerie. Surely, the writers can come up with some other excuse to make that happen.

I’ve liked Bret Harrison in ‘Grounded for Life’, ‘The Loop’, and ‘Reaper’, but I have a hard time believing him as a scientist. However, he does get in the episode’s best line: “Anna’s a lizard? That sucks. She’s so hot.” If he sticks around, I hope the writers find something interesting for him to do.

Jane Badler doesn’t get to do anything except step out in front of the camera this episode, but I hope she’ll be able to bring some life to the show. She looks pretty good for a woman nearing 60, and the scenes from the next episode make it look like a good ol’ fashioned ‘Dynasty’-style catfight is coming. (Perhaps ‘Falcon Crest’, in which Badler had a recurring role, is a better comparison.) That could be fun. IMDb claims that her character’s name is Diana. Is she literally supposed to be the same Diana from the original ‘V’. That would be too awesome.

All said and done, ‘V’ is still not a good show, but I guess I’ll stick around for a few episodes to see where it goes. It’ll most likely get canceled before a full season, anyway.