At the height of its popularity during its first season on air, David Lynch’s ‘Twin Peaks’ was more than just a ratings hit or a critical darling. It was a genuine cultural phenomenon. Each episode of the series became the must-discuss topic of water cooler conversation throughout America, and even the rest of the world. Impatient fans in Europe begged friends from the United States to ship videotape recordings overseas rather than wait months for new episodes to hit their airwaves. To capitalize on this success, the show’s producers licensed a host of official ‘Twin Peaks’ merchandise. For the latest entry in my David Lynch marathon, I’ve decided to revisit the show’s most famous tie-in novel, ‘The Secret Diary of Laura Palmer’.

While investigating Laura’s murder, FBI Special Agent Dale Cooper discovered that the girl kept two separate diaries, a wholesome version that she left out for her snooping parents to read, and a darker, more honest version that she hid away only for herself. The contents of the missing diary were often speculated about in the show’s first season. As such, it made the perfect subject for an authorized companion book. 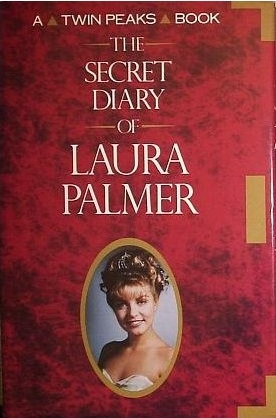 ‘The Secret Diary of Laura Palmer’ was written by David Lynch’s daughter, Jennifer Lynch, and chronicles Laura’s life, inner thoughts and darkest secrets from age 12 until just before her death at age 17. The book is written entirely in first-person epistolary fashion, as if the chapters were actual diary entries. Jennifer Lynch was 22 at the time she wrote it. Many of the early, more innocent chapters read like they may have been plumbed from the author’s real childhood diaries. They’re filled with naïve hopes, dreams, fantasies and bad poetry that convincingly feel like the workings of a young girl’s mind.

As the novel skips forward through the years, Laura describes the horrors of her sexual abuse, as well as her descent into drug addiction, mental illness and prostitution. In these parts, Ms. Lynch indulges in some darker fantasies. Many of the book’s pages contain quite graphic sexual content, far beyond anything that could be shown on television.

The book was published between the first and second seasons of the series. At the time, this was the first glimpse that fans were allowed to see of Laura as a fully-developed character in her own right, rather than just an enigmatic icon that others talked about. One consequence of its timing is that the book does not contain any plot spoilers about Laura’s killer (which wasn’t revealed until halfway through the second season). Because Laura was unable to come to grips with her abuse over the years, she projects the identity of her abuser onto a being she calls “BOB,” who could be any number of possible characters from the show. As the diary draws closer to the time of her death and Laura starts to figure out who BOB is, the book has several gaps marked as, “PAGE RIPPED OUT (as found).” These gaps increase in frequency in the last few chapters.

‘The Secret Diary’ is considered an official part of the ‘Twin Peaks’ canon. Reading it again now, the book mostly holds up to scrutiny with the continuity of the show’s second season and the prequel movie. However, Laura’s description of a drug deal gone bad conflicts with the way those events play out in ‘Fire Walk With Me’. This is a relatively minor and forgivable lapse. (The show’s other famous tie-in novel, ‘The Autobiography of F.B.I. Special Agent Dale Cooper’, suffers a much more significant breach of continuity.)

Even all these years later, ‘The Secret Diary’ is still a compelling read that sheds light into a damaged girl’s psyche. A little suspension of disbelief is required at times. (Laura has a habit of writing out lengthy diary entries at moments that would seem inconvenient for her to stop and pick up a pen.) For obvious reasons, it also ends on a cliffhanger that wouldn’t be resolved until the second season of the TV series, and the final chapters focus a little too much on tying up loose ends that connect the book to the events described in the show.

One of the most enduringly popular artifacts of the ‘Twin Peaks’ phenomenon, ‘The Secret Diary of Laura Palmer’ was republished in 2011 and is currently still in print.