The first round of TV Madness has concluded. Only 32 characters remain. Who will win? Who will die? It’s up to you to decide!

That first round had its share of drama. Comments became heated when well-known characters started dropping off. That’s the tough thing about a tourney like this. You just don’t know how it’s all going to shake out. There weren’t any huge upsets, though. Jack Bauer and Vic Mackey are still in the hunt, and they remain major favorites over the competition.

With some of the weak weeded out, we now have a stronger pool of competitors. This is where the voting gets tough. Everyone has favorite characters, and it’ll be hard to see them meet their demises as the tournament continues.

Before we get started killing off another 16 characters, let’s take a look at how the tournament has shaped up so far.

Steve Austin vs. Brisco County, Jr. – I thought for sure that Austin would take this one, even though he’s an older character. He’s pretty iconic and has a plethora of superhuman abilities. Not even that video I posted of Austin taking on Andre the Giant dressed up as Bionic Bigfoot could stop the Brisco train from running him down. I was pretty surprised by the outcome of this match.

The Tick vs. Tony Soprano – I have a huge love for the Tick and named him as one of my dark horse candidates to take home the crown. Still, I was apprehensive to see him pitted against Tony Soprano. ‘The Sopranos’ was insanely popular and still is. Even though I was sure The Tick would easily take out Tony in hand-to-hand combat, I thought that Tony’s popularity would sway the vote in his favor. But that didn’t happen, and now the big blue lovable buffoon finds himself moving on to the next round.

Seven of Nine vs. B.A. Baracus – It’s friggin’ Mr. T! It’s hard to think of him losing to anyone. Nonetheless, he lost to the universe’s sexiest Borg, by one vote. ONE! That voting ran neck-and-neck the entire time too. Crazy stuff.

Buffy vs. Vic Mackey – Talk about two heavyweights. This seems like a match-up more suited for the Final Four instead of the second round. That’s just what happens with a random seeding, though. This will make for a very interesting battle. Both characters are respected all through the television world as dominating in their respective realms of existence. Buffy has super powers, but Vic Mackey is Vic Mackey. Damn, that’s a tough one.

Angel vs. Fox Mulder – I’d say that Angel has the upper hand against almost anyone else in this tournament just because of his superhuman powers. However, Mulder is the absolute worst person for him to meet right now. Mulder has more than enough experience and know-how to take care of a supernatural being. He’s done it hundreds of times.

Raylan Givens vs. Cordell Walker – We had our FBI agent throw down in the first round, when Mulder took on Dale Cooper. Who would’ve thought that Round 2 would bring us another law enforcement tussle? A Texas Ranger goes up against a U.S. Marshal. Honestly, I think Raylan is head and shoulders better than Walker, but that whole “Chuck Norris is the most unbeatable entity ever” nonsense will surely rear its head.

Only four females remain in the tournament, which makes up only 12.5% of the remaining characters now.

Ten of the 32 characters left have some kind of superhuman abilities, whether supernatural, alien or robotic.

Five “Thinker” characters are left. These are characters who can readily use their minds and cunning to outsmart bigger, stronger foes: Ben Linus, Dexter Morgan, Sherlock Holmes, Captain Kirk and Fox Mulder.

Hulk Hogan is still in the tournament! Hooray!

Heavyweights – Buffy, Vic Mackey, Jack Bauer and Captain Kirk are the marquee names still left in the tournament. Either Buffy or Mackey has to go down in this next round, though.

Outside Contenders – Michael Westen, Ben Linus, Jonas Blane, Sherlock Holmes, Hercules, John Locke and Sylar. Westen is a trained spy who can kick anyone’s ass. Linus will outsmart and outwit anyone who gets in his way. Blane doesn’t have Jack Bauer’s reputation, but he might as well, given how easily he dispatches his enemies. Holmes is Holmes – everything said about Linus applies here too. Hercules is friggin’ half god. Locke has mystical powers and doesn’t die, even when he does. Finally, Sylar cuts open heads, takes abilities and has stockpiled so many powers that he could easily kill just about anyone.

Dark Horse Candidates – I still like the Tick. If I were making odds on this game, I’d probably say he had a 40-to-1 chance going into this tournament, but I would’ve taken that bet. Hurricane Spencer has the advantage of being Hulk Hogan and being absolutely nutso in any video clips I find from his show. Fox Mulder doesn’t have the fighting skills that most of the others have, but he is adept at taking down anyone with special powers, which should be huge in this tournament.

Below you’ll find an updated bracket. We’ll start up the Round 2 match-ups on Monday. 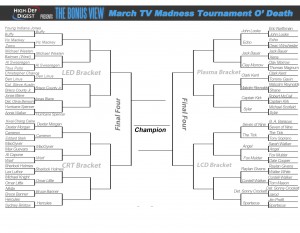