Let it be known that I’m posting this at the behest of Mrs. Z, who likes to give me crap about being a chauvinist pig-man whenever Sookie takes her clothes off on ‘True Blood’. (Which is quite often. Thank you, Anna Paquin!). Meanwhile, Mrs. Z has trouble scraping her own jaw off the floor whenever studmuffin vampire Eric (Alexander Skarsgard) struts around in the buff. Which is fairly frequently as well. The point I’m getting to with this? The three principals from the show appear on a new, nearly-pornographic magazine cover (seen after the break), and Skarsgard boasts that he really lets it all hang out on set. You’re welcome for that mental image, ladies. Also, Executive Producer Alan Ball reminds us why he’s so awesome. 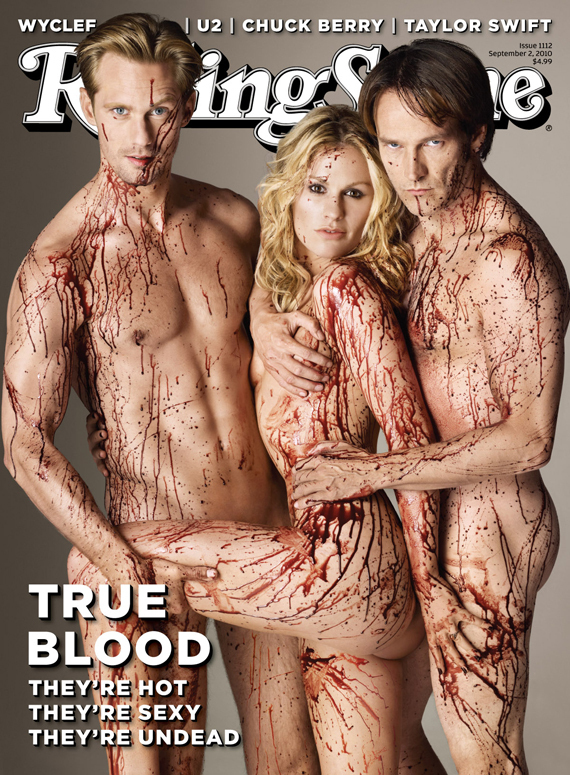 The September 2nd issue of ‘Rolling Stone’ has a cover story with the incredibly lame title “The Joy of Vampire Sex.” Really? That’s the best that the mag’s headline editor could come up with? The cover photo features lead actors Anna Paquin, Stephen Moyer and Alexander Skarsgard naked and covered in blood. Moyer looks way outclassed by the hotness of the other two. As if feeling jealous, he’s pretty shamelessly groping Paquin. It’s a good thing they’re engaged in real life. However, Skarsgard’s pose in the photo is particularly interesting given his comments in the accompanying interview.

On the subject of nudity in the show, the actor says, “I don’t want a sock around it, that feels ridiculous. If we’re naked in the scene, then I’m naked. I’ve always been that way.”

Now take a look at that cover photo and note the position of his junk in relation to Paquin’s. Hmmmm….

Of greater substance is the interview with Alan Ball, who takes a nice pot-shot at Stephanie Meyer and the ‘Twilight‘ phenomenon.

The idea of celibate vampires is ridiculous, True Blood creator Alan Ball says. “To me, vampires are sex,” he says. “I don’t get a vampire story about abstinence. I’m 53. I don’t care about high school students. I find them irritating and uninformed.”

[via The Huffington Post – Yeah, I know, sorry about that.]