I can’t stand the ‘Transformers’ movie series and I’m not a fan of 3D. Even so, when I see the new 3D glasses that Hasbro is bringing out, a part of me wishes that I was eight years old again.

Everything about these 3D helmets screams out at me to hate them. It’s a tacky way to cash in on a technology that already makes movies expensive for families. It doesn’t even make sense for the market, since the ‘Transformers‘ movies are clearly not aimed at young children. (If they are, there’s something seriously wrong with Michael Bay. Yes, aside from his terrible, terrible movies.)

I just can’t bring myself to hate them, though. I try but I just can’t. If I was a kid, and I was told that not only would I be seeing the new ‘Transformers’ movie, but I’d get to go dressed in costume, I’d go ballistic with joy. 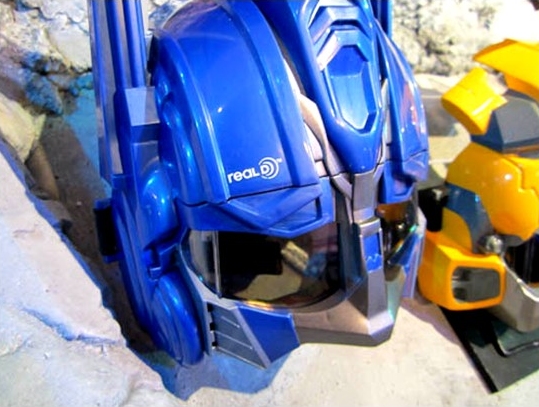 A month and a half before the theatrical debut of ‘Transformers: Dark of the Moon’, Hasbro will launch a set of two masks for kids. Whether you get Optimus Prime or Bumblebee (Why would you ever get Bumblebee?), you’ll find 3D lenses built in to the mask. That means your children can go dressed as their favorite character to see the movie.

Yes, your children. I don’t want to hear about any Bonus View readers actually wearing one of these to the ‘Transformers’ premiere. Then again, if a serious drama ever goes 3D, you’ll get mega-bonus points from me for wearing your ‘Transformers’ helmet to that.

The masks will hit stores on May 16th, and are expected to be priced at $9.99. They’re compatible with RealD theaters, as well as Vizio 3D HDTVs.