Movies about ordinary people dressing up like superheroes and attempting to fight crime are quickly becoming a whole genre unto themselves. This year’s earlier ‘Kick-Ass‘ is perhaps the defining example. ‘Watchmen‘ might also qualify, from a certain point of view. A favorite of last year’s Toronto International Film Festival was ‘Defendor’, starring Woody Harrelson, which unfortunately wasn’t picked up for wide distribution. (It was recently released on Blu-ray in Canada, though.) Now we have Rainn Wilson donning a homemade comic book hero costume in ‘Super’. It’s a lot of fun in its own right.

Along with ‘Peep World‘, this is the second movie that Wilson had at TIFF this year. Although I didn’t care for ‘Peep World’ all that much, I did like his character in it. In both cases, I’m impressed by the actor’s attempt to stretch beyond his usual screen persona.

In ‘Super’, Wilson plays a sad-sack schlub named Frank whose wife (Liv Tyler – and yes, there’s an explanation for how he could have hooked up with Liv Tyler) has left him for a scumbag drug dealer (Kevin Bacon, having a lot of fun). Overcome with rage and suffering from schizophrenic visions of God’s finger touching his brain, Frank takes it upon himself to become Crimson Bolt, a costumed avenger who will right the wrongs of the world. Mostly, he does this by taking a plumber’s wrench and braining anyone who does something he doesn’t like. Steal a purse – Ka-thunk! Attempt to molest a child – Ka-thunk! Cut in line at the movie theater – Ka-thunk Thunk Thunk!!

(I especially sympathize with that last one. An incredibly rude woman tried to cut in line for this very movie.) 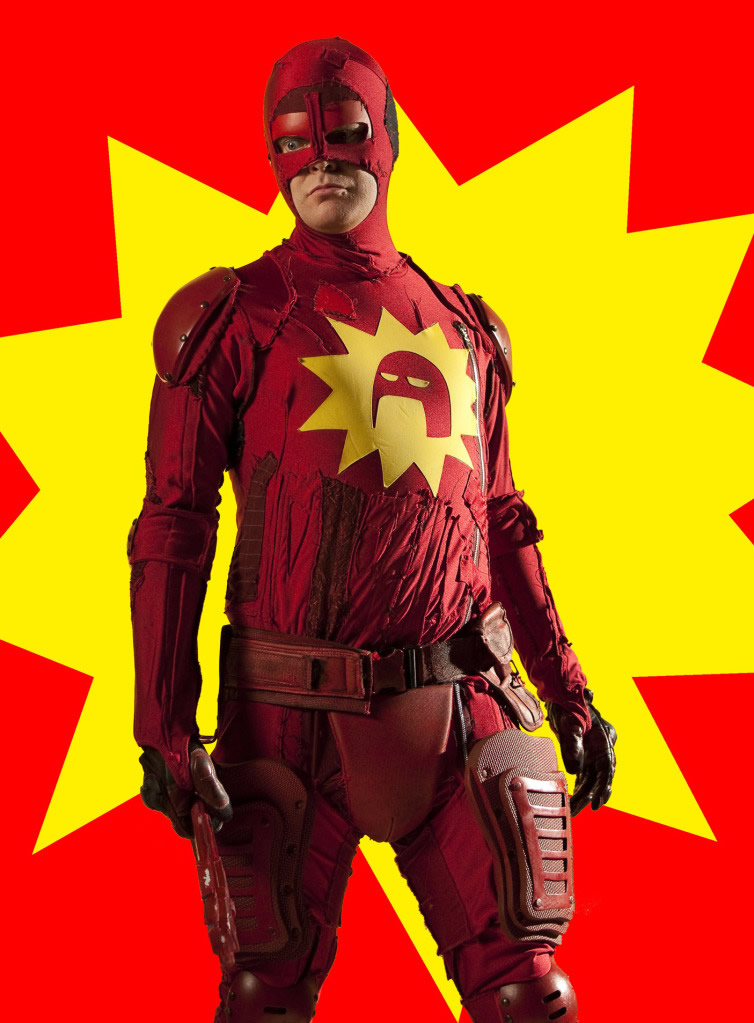 The movie was written and directed by James Gunn, who previously made the cult favorite ‘Slither‘, as well as wrote the screenplay for the ‘Dawn of the Dead‘ remake. ‘Slither’ star Nathan Fillion shows up in a bit part as a religious-themed superhero called The Holy Avenger. His costume is hilarious.

The best part of the movie is Ellen Page as a comic book shop clerk who learns Frank’s identity as Crimson Bolt and obsesses about becoming his sidekick, Boltie. Even if you haven’t liked Page in some of her previous movies, she’s a great deal of fun here. Boltie is basically a psychopath who gets off on hurting and maiming others. Her sheer glee at smashing a car into a thug or blowing up an evil henchman with a pipe bomb is disturbingly funny.

‘Super’ will perhaps suffer from comparisons to ‘Kick-Ass’. The host who introduced the film tried to downplay the similarities – but, in fact, the two movies are indeed very similar. ‘Kick-Ass’ is probably a better movie overall, but ‘Super’ skews a little darker. (Not that ‘Kick-Ass’ wasn’t already pretty dark.) This picture puts more emphasis on the psychosis that would lead someone to dress up in a costume to fight crime. While Frank is a sympathetic character, it’s perfectly clear that he’s mentally ill. And Boltie is just plain psychotic. There’s one particular scene between them (which I won’t describe here) that crosses all sorts of lines you don’t expect a comic book movie to cross.