I love Terry Pratchett. He’s my favorite author by far. He does for fantasy what Douglas Adams did for science fiction, but has taken it a step or two further by introducing more elements of social commentary, critical thinking and some delightful wordplay. His books are amazing, but the TV Movies that keep rolling out are dreadful. The latest affair recently aired on the UK’s Sky1. [Ed: It’ll probably run on SyFy here eventually, as previous Pratchett movies have.] It’s called ‘Terry Pratchett’s Going Postal,’ and is based very loosely on the similarly-named book ‘Going Postal.’

If you’re not familiar with Pratchett’s work, I wouldn’t be entirely surprised. He’s apparently pretty hip in the UK, but I have no idea how popular he is in the U.S. Think of his books as high-fantasy that’s funny. They have a ton of wordplay and seemingly one-dimensional characters that get deeper as time goes on.

That’s the very best part of Pratchett’s work for me. His characters all have such interesting internal and external dialog that the main thrust of the story takes a backseat. Sure, there’s a plot, and it’s an interesting one, but I’m not in it for that. I’m in it to hear Reacher Gilt work his way out of trouble; to hear Lord Vetinari talk 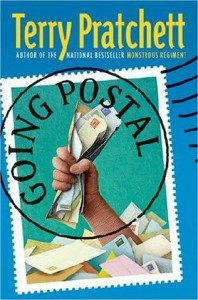 about almost anything; and of course, to hear the speeches of Most von Lipwig, full of bravado and confidence.

But ‘Terry Pratchett’s Going Postal’ doesn’t have those things. Instead of focusing on the wonderful dialog and characters that make the books so fun to read, it focuses on the action of the story, bringing to life some of the book’s less important scenes while leaving out the good stuff.

It’s understandable, of course. Action is more visually stimulating, and it’s got to look a lot better in previews. That’s why it hasn’t been too upsetting that other recent adaptations like ‘Hogfather’ and ‘Color of Magic’ were so bereft of charm. The plot goes in, the jokes get filtered out, and we’re left with a less than satisfactory experience. I can accept that.

‘Terry Pratchett’s Going Postal’ goes a step further than simply gutting the humor out of the books. It changes the characters too, and not in some minor way that only fans would pick up on. These are some big changes.

For starters, the book version of the main character, Moist von Lipwig, is a con man who’s only in it for the thrill of the con. He’s slick, polite and so sharp he could end up cutting himself. When in jail awaiting execution, he arranges to have fruit baskets sent to the guards and takes a genuine interest in their well being. When facing the noose, he retains his rapier-like wit and shoots off a few zingers on the hangman’s block. Think of George Clooney in ‘Ocean’s Eleven‘ or Aaron Eckhart in ‘Thank You For Smoking.’

In the movie, Moist is a cowardly man, unsure of himself and terrified at the thought of being hung. He pleads for his release. Even his seemingly final quip, “I commend my soul to any god that can find it,” comes off as begging for mercy. He’s not even particularly good with people in the movie version, which should raise questions about his abilities as a con artist.

He’s not the only one who’s had a few changes. Reacher Gilt isn’t suave either. Instead, he’s just mean. Mr. Pump, the golem, is without emotion in the book, as all golems are. In the film, he displays a pretty wide range.

All those changes make the story completely different. Instead of a main character who charms us even as he’s lying to us, we’ve got a protagonist that just falls flat. Rather than a legitimately threatening nemesis in Mr. Gilt, we’ve got a one-dimensional baddie that doesn’t feel like a threat. It becomes a different story, and it’s not a fun one.

The one small silver lining on the dark grey cloud that is ‘Terry Pratchett’s Going Postal’ is Andrew Sachs, best known as Manuel on ‘Fawlty Towers.’ His performance as Tolliver Groat is actually very well done.

Hopefully, one day we’ll have a Pratchett movie worth watching. Until then, it’s best to stick with audiobooks as a secondary form of Pratchett-based entertainment – read by Nigel Planer or Steven Briggs for preference.