As one of those folks who writes about movies on a regular basis, I’m faced with a challenge.  I have to explain why a movie is good without actually revealing the major plot points or talking about the ending.  Alternatively, I can throw in a sentence explaining that there will be “spoilers” in the article.  (There will be spoilers aplenty in this one)

The whole practice is ridiculous, and I’ve always been of the opinion that if knowing the end of a movie will ruin it, then it wasn’t a good movie to begin with.

Let’s take an example, or say, 100 examples.  I think we can all agree that the AFI “100 Years… 100 Movies” list is a pretty good indicator of film quality.  You or I may disagree on a particular film or two, but generally, it’s a good list.  Every movie on that list is ‘spoiler proof.’  You could, and probably do, know the end to every single one of them and they’d still hold up as cinematic masterpieces. 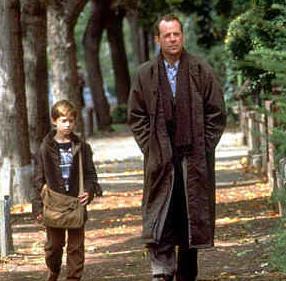 And there are a few films with surprising plot points on the list.  ‘Psycho’ is a great example.  You know, the whole Norman Bates/mother thing.  But that’s the point, isn’t it?  You know already, and you probably knew before seeing the movie.  I did.  It didn’t make ‘Psycho’ any less enthralling.

Not to go down the Hitchcock route again, but ‘Rear Window’ is another great film with a big surprise.  If you haven’t seen the movie, you’re still probably familiar with one of the many parodies and homages, including an episode of ‘The Simpsons.’  It’s not the ending that makes the movie great, it’s the buildup to the ending and the clean execution.

How about ‘Empire Strikes Back’ for a change of

pace.  There’s no question that the secret of Luke’s father was a big deal for people that experienced it for the first time, but I was born in 1982, which means I’ve known Vader was Luke’s dad ever since I can remember.  The surprise isn’t what made the scene powerful.

M. Night Shyamalan built his career on the surprise ending, and look where that’s gotten him. ‘The Sixth Sense’ holds up nicely, and it’s actually more interesting once you know that Bruce Willis is actually dead.   His other movies, like ‘The Village,’ ‘Signs,’ and ‘The Happening’ don’t hold up.  The twist ending isn’t what makes the film.

I could go on with other examples of classic works that we love but already know the ending to.  Okay, one more.  ‘Romeo and Juliet.’  We know what’s going to happen, but we want to see how.  Each retelling brings something new to the table, but the ending, and the entire script, stays the same.

And for movies without twist endings, why does it even matter?  Is there a chance that Tony Stark won’t emerge victorious at the end of ‘Iron Man’?  Are we really astounded by the complex ending of ‘Talladega Nights: The Ballad of Ricky Bobby’?  Does anyone really think ‘Toy Story 3’ will end on a sad note?

So let’s agree that the spoiler alert is unnecessary and that movies aren’t about the destination, but about the journey.  If not, can we at least agree that you shouldn’t be reading movie reviews if you don’t want to know anything about the movie?