The next chapter in the action-mystery franchise, ‘Sherlock Holmes: A Game of Shadows‘, will arrive on June 12th in exclusive packaging. Only the cover artwork has been revealed so far. (Click to enlarge): 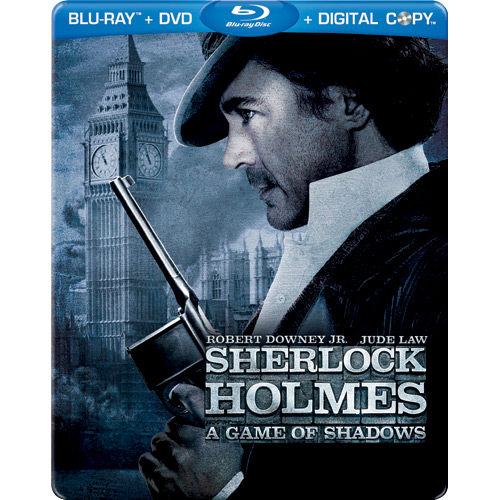 On one hand, I like the design. But on the other hand, that doesn’t really look like Robert Downey, Jr.,does it? It kind of looks like Sean Young with some facial stubble to me.

It’s also worth noting that the original ‘Sherlock Holmes’ was released in Canada in a MetalPak case. So, while this sequel is listed as a SteelBook brand product, it could very well be another MetalPak. Buyer beware, if that sort of thing matters to you.

The release will be a Blu-ray/DVD/Digital Copy combo pack that features 1080p video, a DTS-HD Master Audio 5.1 soundtrack, and the following supplements:

The pre-order price for this SteelBook is currently $36.99 CAD. Unfortunately, Future Shop will not ship to the United States.