The one and only program that I have or will ever watch on ESPN, the Scripps National Spelling Bee, aired its 2012 finals last night. The winning word, “guetapens,” is a French term for an ambush or trap. That seems appropriate, doesn’t it? 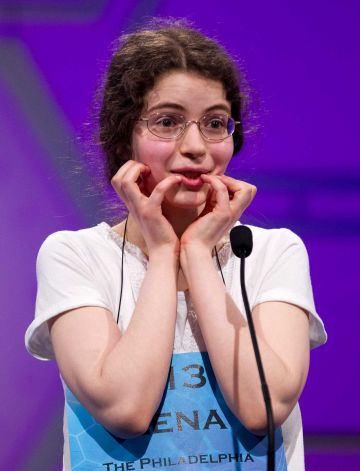 This year’s winner is Snigdha Nandipati, a 14-year-old 8th grader from San Diego. Not to diminish her achievement, but I was personally rooting for adorably nerdy Lena Greenberg from Philadelphia, who was knocked out in 4th place with the word “geistlich” (an adverb meaning “with deep feeling” used as a direction in music). The poor girl inserted an extra “e” between the l and the i. So close!

The only of the final challenge words that I had actually heard before was “arrondissement,” which is what the districts in large French cities are called. I knew that one because I’ve been to Paris and remembered that the city is divided into twenty arrondissements in a clockwise spiral. (Montmartre, which is where the movie ‘Amélie’ is set, is in the 18th arrondissement.) Other crazy words that I had no hope of ever spelling included “schwarmerei” (excessive or unwholeseome sentiment), “chionablepsia” (snow blindness), and “luteovirescent” (greenish yellow).

My own last involvement with a spelling bee goes back to the 4th grade, and was a traumatic experience. I believe I made it to sixth place or thereabouts. I don’t recall the word that bumped me out of competition, but I remember vividly that my microphone cut out just before I started spelling it. When the judges dinged the bell and announced the correct spelling, I was adamant that I had in fact spelled the word correctly and they just hadn’t heard me. I was pulled off the stage, humiliated before all my friends. Fortunately, I was only embarrassed in front of my school, not a national audience. I never participated in another spelling bee again.

Do any of our readers have spelling bee stories to share with us in the Comments section?