It appears that we live in a world where movies based on theme park attractions are a viable business model. To date, we’ve had four ‘Pirates of the Caribbean’ movies, one ‘Haunted Mansion’, one ‘Country Bears’, and now a ‘Tomorrowland’. What rides and exhibits will Hollywood try to turn into feature film blockbusters next?

While all of the existing attempts have been based around Disneyland or Disney World, there’s nothing stopping other companies from getting in on this action. From Sea World to Six Flags, or even smaller events like county fairs, a clever producer can pilfer ideas from anywhere.

‘It’s a Small World and a Long Movie’.

Disney teams up with Pixar to bring us a three-hour epic that consists of nothing but annoying puppet-shaped children singing the infamous song over and over and over again. To make it more like the actual ride, Disney asks movie chains to lock the theater doors during each exhibition so that there’s no escape. This will be the first-ever R-rated Pixar film, as the MPAA believes it contains “Terrifying Imagery” and an “Overall Sense of Dread.”

Now that people are catching onto Adam Sandler’s all-expenses-paid “vacation with his buddies as film shoot” tactic, Netflix will cut costs drastically for his next flick. The unscripted film will essentially follow Sandler and pals for a 90-minute round of mini golf in Farmington, NM while Dennis Dugan films the whole thing on a mid-grade consumer camcorder.

Since childhood, Bucephelus Horace Jones has dreamt of someday winning the hot dog eating contest at his local county fair. When he was only a wee lad in 1979, he saw the 270-pound champion, “Rebel” Homer Zachary, set the new record of 98 hot dogs in less than ten minutes. From that moment on, Bucephelus swore he’d defeat that record when grew older and stronger… err, fatter.

Problem is, poor Bucephelus has a high metabolism, which prevents him from gaining much weight, and fills up very easily no matter how hungry he may be. Nevertheless, now at 44, barely maintaining his job as assistant tractor mechanic and recently divorced when his wife Linda Sue left him for his brother Rufus, the middle-school graduate is more determined than ever to enter this year’s contest and break the record. After a four-minute training montage showing him working with his obese mother two days before the competition, our hero is ready and prepared to show the locals that he’s a born wiener.

Sadly, like any true underdog story, Bucephelus did not win that day. He was beaten by Takeru Kobayashi, the Japanese competitive eater, who ate 110 hot dogs. Later that night, Bucephelus went home, which is actually his mom’s house, and cried himself to sleep while tightly hugging and snuggling his dakimakura, which he named Saiko.

We’ll call this masterpiece ‘The Search for Homer Zachary’, or maybe ‘Swan Song for Bucephelus’.

When Disney gets a great idea, the studio is relentless at driving it into the ground. After making a live-action version of an animated classic that wasn’t half-bad (‘Alice in Wonderland’), Disney burned us out by doing the same thing to other proven titles (‘Maleficent’, ‘Cinderella’, next year’s ‘Beauty and the Beast’). ‘Pirates of the Caribbean’ struck gold, but the franchise burned to the ground with the three horrible sequels that followed. I have yet to meet anyone who saw ‘The Haunted Mansion’. ‘Tomorrowland’ is yet another failed attempt at capitalizing on the ‘Pirates’ success, but it’s bound to be wildly successful, so Disney won’t stop there. I can see the studio tackling one of the most classic Disneyland attractions next: The Matterhorn.

For this lackluster family adventure, Disney will hire Edgar Wright to write and direct, but then fire him weeks before the shoot is scheduled to begin. His replacement will be a music video director who hasn’t touched feature films yet. The cast will be led by Brad Pitt, who receives producing credit. In it, he plays a single father/scientist who’s about to embark on a study to investigate strange occurrences recorded in the Swiss Alps. An unforeseeable problem with the babysitter forces him to take his kids on the trip.

While in a remote and dangerous area within the mountains, he and his kids become separated from the rest of their team. As they try to make their way through the elements, Yeti and other dangers arise. Believing that the Yeti is out to get them, the family flees and hides. However, when the Yeti saves the day, they realize that he’s their pal and the strange occurrences were messages he sent to bring back aid.

You see, the Yeti was hibernating and awoke when the Earth reached a certain temperature. Now, with a capable scientist on-hand, Yeti can share the world-changing secret to solving global warming, hunger, disease and war. Like ‘Tomorrowland’, ‘Matterhorn’ will not be about the theme park, the characters, the nostalgia, or any fun. Instead, its sole purpose will be its agenda. The only action set-piece, a bobsled ride sequence, will only take up a few moments within the preachy 130-minute bore.

I’m not a fan of ‘Harry Potter’, but sooner or later, I know I’m going to have to make a pilgrimage to the ‘Harry Potter’ parks in both the United States and the UK. That obligation to go to an entire park built around a love of magic and English boarding schools has me thinking that a movie shaped around a more generic magic amusement park, with magical rules built around different rides, could be pretty fun. Something like ‘Last Action Hero’, but hopefully a lot less annoying.

Steven Spielberg should direct a movie called ‘The Theme Park’. Imagine the pitch: “From the director of The Terminal, who managed to cram all the drama and excitement of an airport layover into only two hours and eight minutes, comes a heartwarming tale of standing in really, really long lines… paying too much for stuff… rubbing your feet… and swearing that this is the last time, dammit!”

Forget ‘Freddy vs. Jason’. This is ‘Six Flags over Elm Street’. 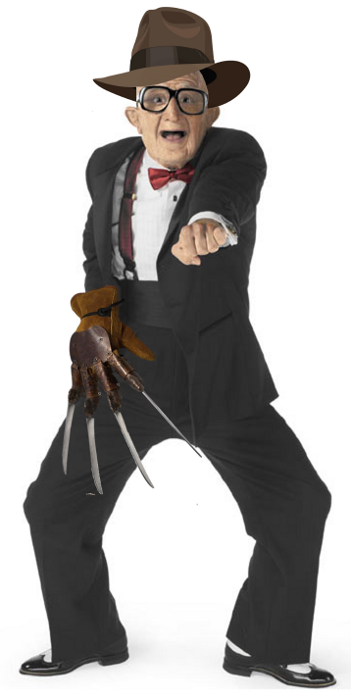 Welcome to ‘Storyland’, the new high-octane, PG-rated action thriller for audiences under 10. The premise: A dastardly group of European terrorists invade the kiddie theme park to steal a treasure of gold buried under one of the rides – but they don’t know which one! As the other park patrons cower in fear, a lone hero emerges to save the day. Fourth-grader Johnny McClane, the off-duty hall monitor for McTiernan Elementary School, must foil the bad guys using an arsenal of water balloons and Nerf guns as they do battle in a series of thrilling set-pieces staged on the Swan Boats, the Huff Puff & Whistle Railroad, and the Roar-o-Saurus coaster!

The elevator pitch is obvious: “It’s like ‘Die Hard’ for grade schoolers.”

What theme parks do you think Hollywood will mine for movie ideas next? Tell us in the Comments.

Be advised that the blog will be closed on Monday for the Memorial Day holiday. We’ll see you back here on Tuesday. Have a great long weekend!