Robots, androids, cyborgs and other forms of Artificial Intelligence have long been a science fiction staple. With this weekend’s theatrical release of ‘Chappie’ in mind, let’s take a look at some of our favorite thinking machines from the worlds of movies and TV.

“Danger, Will Robinson! Danger!” That’s right, my favorite robot is none other than the one from the classic (and campy) 1960s television series ‘Lost in Space‘. How cool was this robot? He was so cool that he didn’t even have a name. Everyone just called him “Robot”!

What was great about Robot is that we got to see his emotional development as the series progressed. Some forget that he was originally a soulless automaton who had been programmed by Dr. Smith to kill the Robinson family. During the first half of the first season, the Robinson family was very wary of the Robot, and it took the youngest family member, Will, to start spending time with it and help turn it into the trustworthy companion it would become as the series progressed.

The actor inside the robot was Bob May, but the person who really gave life to the character was voice actor Dick Tufeld, who also served as the series narrator. If you’re too young to remember this fun series, I’ve got good news. It’s scheduled to get a complete series Blu-ray release this fall to celebrate the show’s 50th anniversary.

There are many good answers to this question, but the very best is the T-1000 from ‘Terminator 2: Judgment Day‘. Able to change form and even mimic voices, this nearly indestructible machine is definitely the most badass robot to ever have existed. In the movie, it’s programmed with one directive: Kill John Conner. But it wouldn’t always have to be used for evil.

If I had a T-1000, I wouldn’t even use it to protect me. Its primary use would be to take my form and do the tedious things that I don’t want to do. Don’t want to go to work today? Have the programmable T-1000 go for you. Imagine having your car break down, but not having the cash to pay for the pricy labor required to repair it. Have the T-1000 fix it for you! I’d even use it for pranks around the office. Have it take the shape of your boss, then go around work firing people. The things you could do with your own personal T-1000 are limitless.

I’d say my favorite movie robot (or technically “Replicant”) would be Roy Batty (Rutger Hauer) from ‘Blade Runner‘. Highly intelligent, fiercely loyal and eminently deadly, Batty’s character combines the inquisitiveness of a child with the fierce violence of a trained killer. His soliloquy at the end of the film is one of the most powerful points in the movie. Rick Deckard (Harrison Ford) has more than met his match in Batty, and yet, for all his training and violent nature, Batty shows that he’s capable of compassion too. More human than human indeed.

Even though Unicron was a bad guy and nothing but his head stuck around after the movie (I guess “bigger is better” only lasts a couple of sentences), he’s still one of my all-time favorite robots.

So many to choose from, but I’ll go with Marvin (embodied by Warwick Davis and voiced by Alan Rickman), Zaphod Beeblebrox’s humble servant in ‘The Hitchhiker’s Guide to the Galaxy‘. Imbued with a “Genuine People Personality,” he is therefore perpetually depressed, lending further absurdity to every scene he’s in.

It’s quite clear that ‘Chappie’ has that special bit of optimism that seems to run through all the conventional sci-fi A.I.s, but my favorite A.I. is the antithesis of such sentiment. That would of course be Marvin from ‘The Hitchhiker’s Guide to the Galaxy‘. Between the recent movie and the old TV production, I favor the TV version of Marvin, mostly because he was so expertly crafted in the book series. His towering intellect is brought to heel under the auspice of being a servant, and it makes for endless moments wherein he laments how ridiculous his existence is. Ultimately, his trip through time is both disturbing and still wryly humorous: “The first ten million years were the worst. And the second first ten million, they were the worst too…”

I think if I didn’t pick this guy who is standing in my home as I write this, there would definitely be “trouble”… 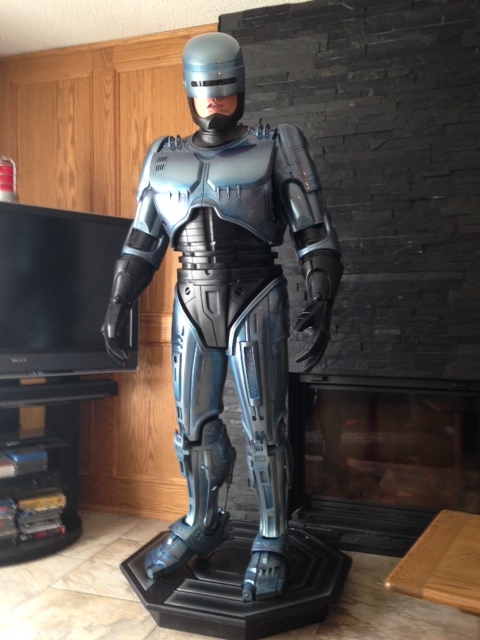 Competing for my #1 spot, ‘RoboCop‘ beats the likes of Roy Batty and WALL-E by a nose. In these three man-made artificial life-forms, we have a typical robot designed to serve humanity, a highly-intelligent and self-aware android that questions its existence, and a very mechanical, seemingly-oblivious cyborg. Of the three, the last machine caught my imagination since Paul Verhoeven’s 1987 action classic. Seeing police officer Alex Murphy become conscious while protecting the crime-ridden streets of Detroit shows that he’s more than just a Frankenstein creation of dead flesh or a simple assembly of cold, lifeless, shiny metallic parts. It’s a journey of finding one’s humanity, and proves that he’s not just another cog in the corporate machine.

Adam already mentioned one character in the animated ‘Transformers: The Movie’, but I feel it necessary to give a shout-out to Galvatron as well. R.I.P. Leonard Nimoy.

With that said, what I have in mind here isn’t a robot at all. Frankly, I think it’s a limitation of the imaginations of most sci-fi writers to assume that a thinking machine would be confined to a single humanoid body. If (or rather, when) mankind finally develops real Artificial General Intelligence, I see it being something like Samantha in the movie ‘Her‘ – a disembodied consciousness that exists across a network and is capable of rapid evolution. The fact that the movie depicts this without immediately envisioning an apocalyptic scenario is very clever and original, I think. It’s natural for humans to fear what we don’t know or understand, but the creation of a true General A.I. could be something wonderful, perhaps even the most important thing we’ve ever achieved as a species. If it happens to speak like a sultry-voiced Scarlett Johansson… well, that wouldn’t be too bad either.

An honorable mention of course must go out to HAL from Stanley Kubrick’s brilliant ‘2001: A Space Odyssey‘.

From Johnny Five to Data on ‘Star Trek: The Next Generation’, what are your favorite robots or A.I. from movies and TV? Tell us in the Comments.