“3-D is a waste of a perfectly good dimension,” wrote Roger Ebert in Newsweek late last month, much to the ire of fans of three dimensional movies.  “It adds nothing essential to the moviegoing experience.”  Tech blogs across the internet were quick to jump to the format’s defense, but I have to admit that I agree wholeheartedly with the premise, if not all of the reasons behind it.  I’ve seen one new 3-D film and that was enough for me.

There’s plenty to be said in defense of the 3-D format, but personally I can’t stand it.  Ebert’s article touches on some of the big reasons for me, the biggest of which is that – despite what the ad people keep telling me – it doesn’t actually help with immersion.  Characters not fully in frame completely ruin the illusion.  There’s nothing like a disembodied torso hanging in the air to make me remember that I’m watching a movie.

Add to that the poor use of the effect thus far.  Anything with live action components just looks awkward, actors look shorter or taller than they should, and the only 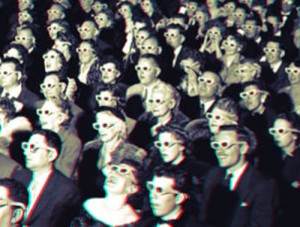 thing that really works well is digital animation, like in ‘Avatar.’  Post ‘Avatar’ movies that used 3-D like ‘Clash of the Titans’ and ‘Alice in Wonderland’ were met with quite a bit of criticism for their poorly done 3-D effects.

Ebert touches on a lot of this in his article, and delves into the business side of things.  He also suggests other technologies that Hollywood could better spend its time working with. It’s a damning article, but it does end on a softer note.  “‘Im not opposed to 3-D as an option,” writes Ebert.  “I’m opposed to it as a way of life for Hollywood, where it seems to be skewing major studio output away from the kinds of films we think of as Oscar-worthy.”

Whether you’re a fan of the format or not, Ebert’s article is a great read.  Check it out over at Newsweek