Having written about so many horror flicks for this column, it’s little wonder that I’d eventually feel compelled to give another genre a shot. In doing so, I inadvertently wound up picking a movie featuring more dismemberment, more geysers of blood, and a higher body count than entire long-running slasher franchises.

Ito (Joe Taslim) is hardly a stranger to murder and mayhem. As one of the elite assassins of the Six Seas, he’s slaughtered untold hundreds to protect the criminal interests of the Triad. The prospect of, say, gunning down an entire Indonesian village to clear the way for a casino means it’s just another Tuesday. 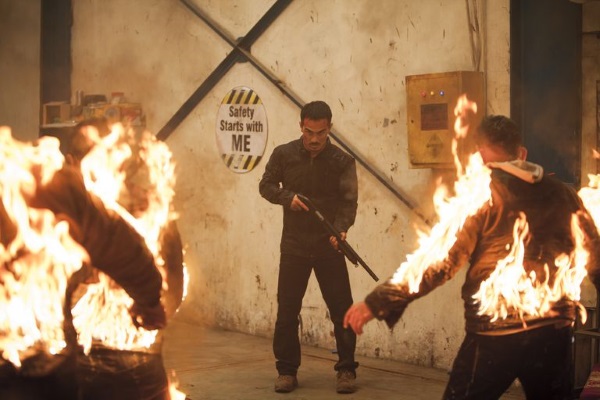 This time, something’s different. After witnessing the anguish of a young girl he’s responsible for orphaning, Ito can’t bring himself to pull the trigger. Rather than silence the last surviving witness, Ito instead spins around and murders his entire death squad. He’s under no illusions about the fallout that’s soon to come. There will be retribution. There are – let me do the math here – five Seas left, all hellbent on exacting the Triad’s vengeance against this traitor and the child he’s protecting.

At least not everyone in Ito’s orbit holds a grudge. A few key members of the gang he left behind to join the Triad quickly rally behind him. Another (Iko Uwais) is torn between loyalties past and present, offered the choice between claiming Ito’s spot as the last of the Six Seas or saving an estranged friend from meeting a brutal end. 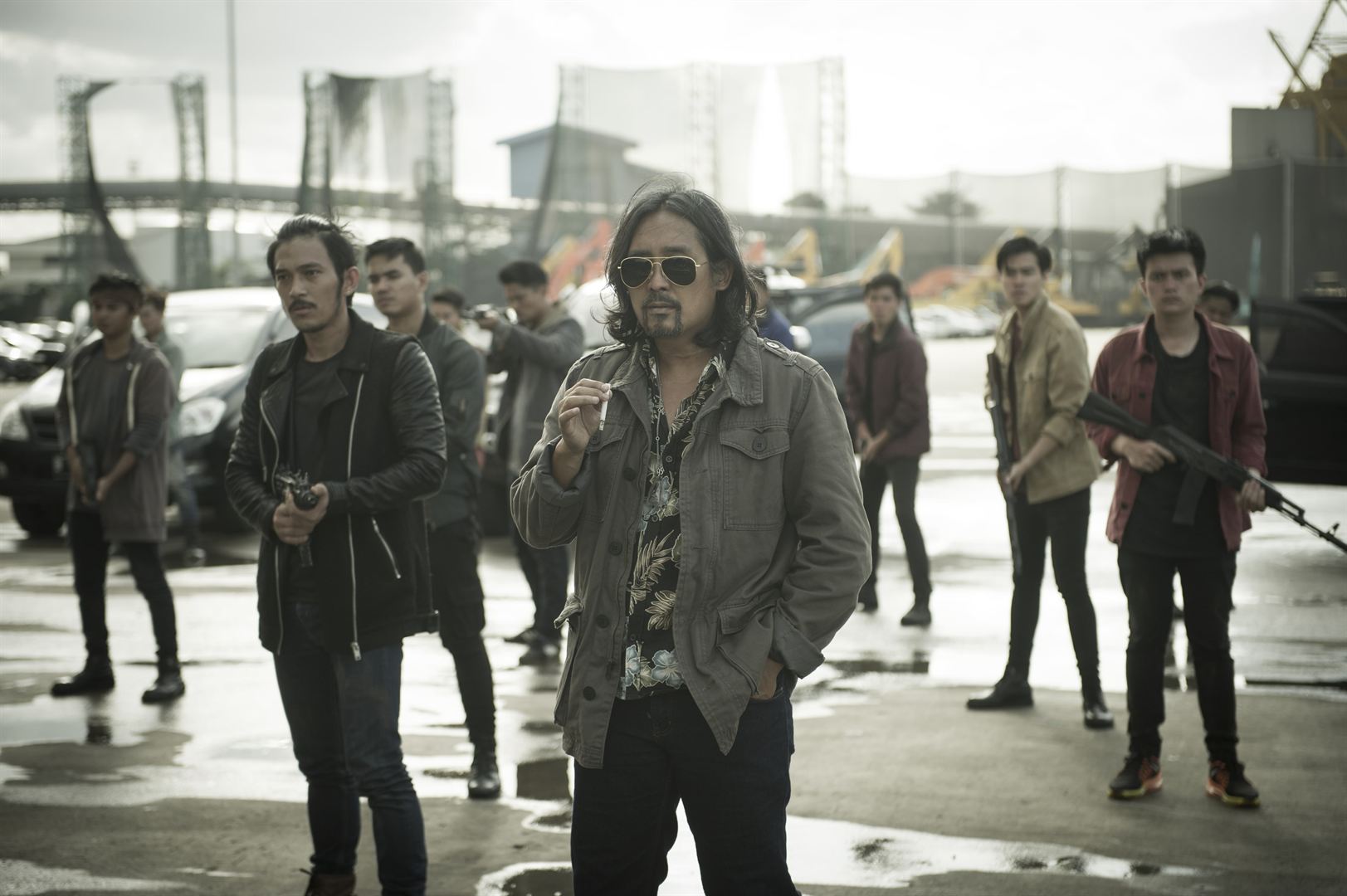 I could keep droning on about all that, but it’s not as if the plot beats of The Night Comes for Us really matter all that much. Its characters are fleshed out just enough to feel a twinge of sadness when one of them is stabbed 85 times, has entire clips of automatic weapon fire emptied into him, and is then summarily disemboweled. And probably shot and stabbed some more after that. Okay, that may be a slight exaggeration, but it’s closer than you may think. The point is that if you’re aching for rich character development or an engrossing story, The Night Comes for Us won’t scratch either of those itches.

For those can’t resist the siren song of The Raid and its sequel, on the other hand, this is essential viewing. Writer/director Timo Tjahjanto draws deeply from the wealth of talent on both sides of that franchise’s cameras, chief among them actors Joe Taslim, Iko Uwais, Zack Lee, and Julie Estelle. Thinly-sketched though these characters may be, the cast infuses a great deal of life and personality into them, elevating what could’ve just been bloodied cardboard cutouts. The intensity of these performances further fuels the film’s unrelenting energy. 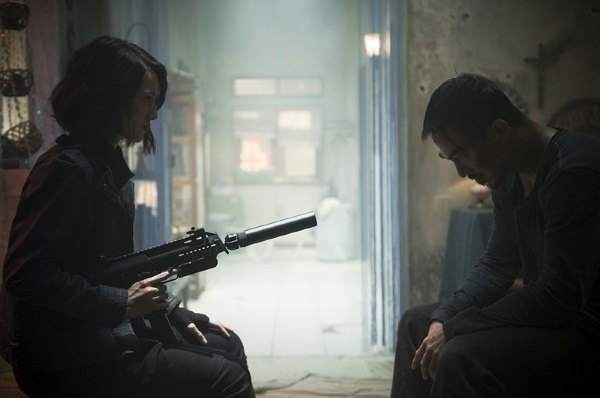 I wasn’t exactly clacking away at a stopwatch throughout, but it wouldn’t surprise me if 95 of the movie’s 120-minute runtime was devoted to shootin’ and stabbin’. Several scenes seem to send half of Indonesia rushing towards Ito, flailing machetes and other assorted blades all the while. I shudder to think how many literally hundreds of casualties are ultimately claimed by the Triad’s hunger for retribution, all in a ballet of beautifully choreographed violence.

As staggering as the scope and scale of these epic battles royale are, the more intimate one-on-one brawls between the assassins of the Six Seas are every bit as impressive. When it’s all said and done, you’re looking at a glass bottle embedded in an overbearing prick’s face, a thug skewered on meat hook, bone-saw dismemberment, a cow’s femur or something plunged through a bad guy’s heart, death by “Caution Wet Floor” sign, a hallway of assassins reduced to red mist and chunks of flying meat, a force-fed billiards ball, garroting by a tumbling window AC unit, a heroine ripping off what’s left of her nearly severed finger… and the list keeps unspooling on and on from there. 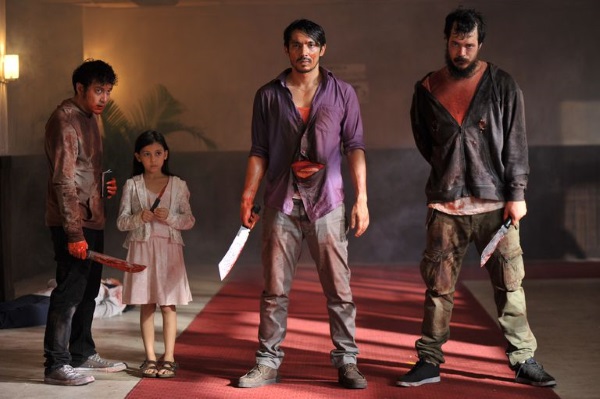 With such a colossal body count, it would’ve been easy to find myself numbed by all this mayhem. Instead, the choreography and carnage are so artful – so dementedly imaginative – that the onslaught of fight sequences never feels like overkill or more of the same. The Night Comes for Us is eager to show viewers something they’ve never seen before, with every scene aiming to be bloodier and more unhinged than the one preceding it. Admittedly, several seemingly critical characters get lost in the shuffle. I wasn’t nearly as invested emotionally in several key subplots or warriors as I’d imagine the film would like. And no, I’m not talking about you, White Boy Bobby (Zack Lee); you light up my life.

This film’s violence-as-art doesn’t quite reach the same dizzying peaks as The Raid 2, nor does it build a world as unique or enthralling as that of the John Wick franchise with its warring assassins. Still, I haven’t come across anything this year that approaches the dazzling fight choreography or bone-shattering havoc showcased here, and it’s all just a couple of clicks away on Netflix.

TagsIko Uwais Netflix Night Comes for Us One Man's Trash