With recent news that plans for a movie adaptation of the Jane Austen classic ‘Pride and Prejudice and Zombies’ are back on track, this inevitably begs one burning question: Ninja vs. Zombies? Which is more awesome? Who would win in a fight? Please help us settle this debate once and for all.

As everyone no doubt remembers from English Lit 101, ‘Pride and Prejudice and Zombies‘ follows the exploits of headstrong young Elizabeth Bennet, who uses her ninja training to clear the English countryside from the plague of “Unmentionables.” Initially, Natalie Portman was attached to star in a movie adaptation. This seemed like fine casting to me. Unfortunately, Portman eventually dropped out due to scheduling conflicts. Now, Bloody Disgusting reports that an offer has been extended to ‘Alice in Wonderland‘ star Mia Wasikowska for the lead role, and that Bradley Cooper has been offered the part of Mr. Darcy. While neither has yet accepted, it’s clear that the producers are taking serious steps to move forward with the project.

Still, this leads me to wonder about the ninja vs. zombies debate. Sure, a properly trained ninja would probably be good at evading and outmaneuvering a lurching zombie, and the katana blade makes an excellent tool for easily decapitating the undead. However, zombies tend to attack in massive hordes that come from every direction. Their sheer numbers are a formidable challenge for any opponent.

Vote in the poll below to tell us how you think this would turn out. And be sure to share your logic in the comments section. 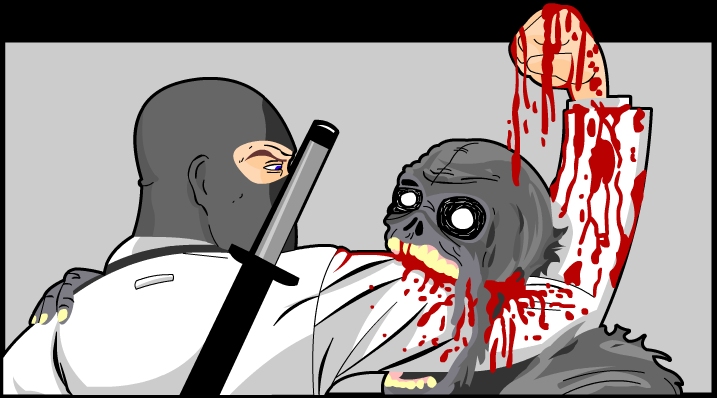