Hey now, you’re ninja, get your game on, go play! You probably have that Smash Mouth tune stuck in your head now, huh? Sorry about that, but soon you’ll be able to smash the mouths of rival ninja warriors and fight for your clan’s honor in ‘Ninja All-Stars’, the latest miniatures game from the creators of the hugely popular Super Dungeon Explore.

Welcome to the Island of Kagejima and the Kingdom of the Moon. Journey with us to a shadowy land where six clans compete to prove themselves worthy of serving the Moon Princess as protectors of their homeland. Each clan has its own strategies and traditions on how to walk the way of the warrior. Be warned! Things are not always as they seem. The way of the ninja is perilous and deceptive. The honorable ways of the samurai of the Sun Empire are considered naive and quaint by most shinobi.

In the game (which is currently seeking funding on Kickstarter), 2-4 players build a team of ninja combatants and face off against each other in a variety of competitions in order to impress the Moon Princess. After each challenge, the participating ninjas may earn experience that can boost their skills and even grant new abilities to make them stronger in the next competition.

The core mechanic of the game revolves around six elements: Earth, Wind, Fire, Water, Spirit and Void. Each element belongs to a specific clan. For example, Clan Tora from the mountains is centered around Fire, while the coastal Clan Ika is centered around Water. The dice used in the game have one of these elements on each face and are used to determine combat results as well as to make certain “affinity tests” during a battle. 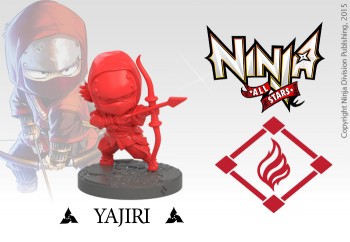 Each clan is made up of various different types of ninja that can be recruited for a team. Every team must include one Chunin – a highly-skilled leader with two special abilities (but only one is chosen when recruited). Kaiken are stealthy melee fighters, while Yajiri specialize in ranged combat. Kunoichi are the speedy scouts who are great at retrieving certain objects, and Madoushi are the mystical warriors who contribute magic and healing. Finally, Oni are giant and resilient fighters who make an imposing threat on the battlefield. Each clan not only has a different sculpt for these ninja types, but also a unique skill set. So, for example, Kaiken from one clan will play a bit differently than Kaiken from another. 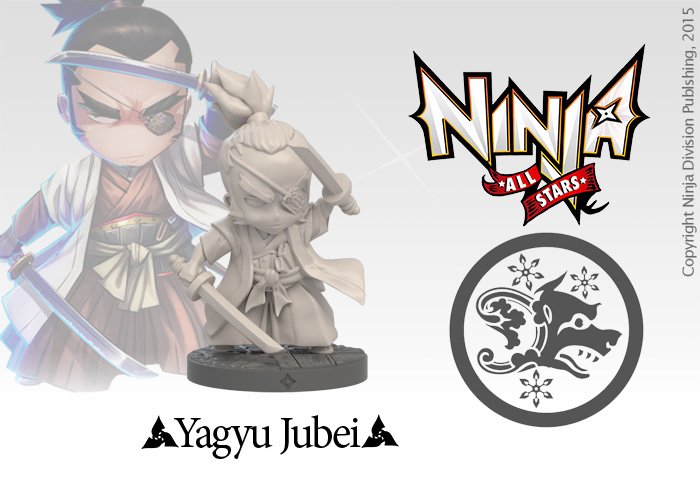 The game also has unique named heroes who are generally more powerful than the standard units, although they will cost more to field. Each clan has its own heroes, but can additionally hire specialized Ronin heroes who aren’t associated with any particular clan. Ronin give the clans more flexibility, however their services don’t come cheaply. I really like Yagyu Jubei, who has a Blind Swordsman kind of vibe, but my favorite is the Lone Wolf and Cub-themed Howl & Yip – a katana-wielding samurai with a child on his back. 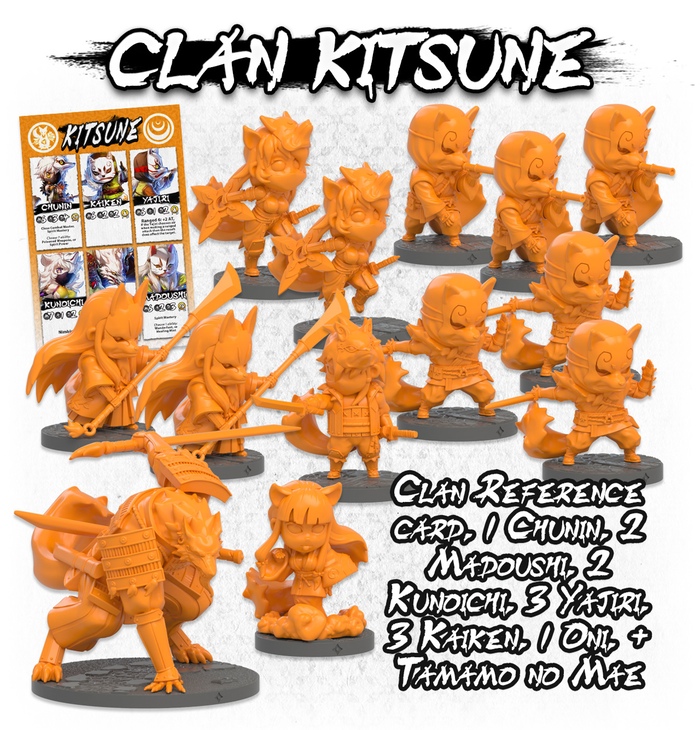 The Kickstarter campaign has two pledges available: Ninja Master and Elemental Master. Both include the ‘Ninja All-Stars’ Rulebook, 16 Elemental Dice, a Double-Sided Game Board (featuring two different tournament grounds), 2 Sideboards, 56 Card Moon Deck, Tons of Tokens, Team Score Pad, 6 Samurai Sentries, plus numerous backer bonuses including 4 Shrines, the Super Dungeon Explore Ninja Pack (to use some of these figures in Super Dungeon Explore), and a bunch of bonus Heroes, Oni and Ronin. The only real difference between the pledges is that the Ninja Master pledge is more for beginners and comes with 4 Generic Quick-Start Shrine Ninja Teams and 2 Clan Boxes of your choice, while the Elemental Master pledge doesn’t include the Shrine Ninja Teams but includes 4 Clan Boxes of your choice.

To find more information about ‘Ninja All-Stars’ including a beta version of the rules, or to make a pledge, be sure check out Soda Pop Miniatures’ Kickstarter page.

TagsBoard Games Kickstarter Ninja All Stars Ninjas On the Table