Ah remakes.  Remaking an old film is a great way to make a movie without having to put a lot of effort into it.  We’ve seen a few already this year, and there are plenty more on the way, including ‘Escape from New York,’ ‘Arthur,’ ‘The Birds,’ ‘Clue’ and even ‘They Live.’

“Dick,” you say, “why would you even think about encouraging the already remake-crazy film industry to do more?”  Even if you don’t say that, let’s pretend for the sake of narrative.

“Well,” says I, “have you considered that even the worst movie may have a cool premise but suffer from poor execution?”

Some movies absolutely need to be remade, and these are they. 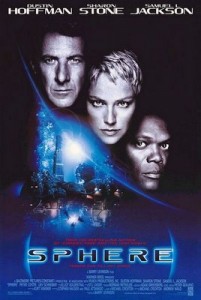 Sphere’ is a big one for me.  I was a huge Michael Crichton fan in my early teens, about the same time that ‘Jurassic Park’ hit theaters.  I loved the adaptation, even if it was less than perfect, and couldn’t wait to see the upcoming ‘Sphere,’ which is still my favorite Crichton book of all time.

Just four years after ‘Jurassic Park’ delighted me, ‘Sphere’ disappointed me.  And it’s a shame too.  It’s got a great cast in Dustin Hoffman, Samuel L. Jackson and Liev Shchreiber, and it was written by Kurt Wimmer – a favorite of mine.

Somehow, ‘Sphere’ just didn’t work.  I think it’s one of those movies that needs a smaller budget and a lesser known cast to really happen correctly.  After all, $80 million and an all-star cast couldn’t get it done properly.  Let’s give it to a relative unknown who knows how to make a budget work.  Neill Blomkamp maybe?

There’s a reason Alan Moore doesn’t go see movies based off of his comics.  Well, there are two reasons.  The first is that the movies based on his comics, save ‘Watchmen’ and, to some, ‘V for Vendetta,’ are absolutely atrocious.  The second reason – he’s a crazy recluse that worships a snake god.

‘LXG’ was very loosely based on the ‘League of Extraordinary Gentlemen’ comics.  The comics were a brilliant collection of literary characters that rewarded the reader for having working knowledge of some of fiction’s classic characters.  The movie was not.

And for the remake?  Simple.  Give it to Zack Snyder and let him do his thing.  He’s got his own project in the works, and it’s far too early to tell how that will work out.  But boy can he adapt!

3. A Sound of Thunder

I try to go into movies with no expectations.  I don’t read reviews beforehand, and I try not to color my opinion of the film before I watch it.  When it comes to ‘A Sound of Thunder,’ I

really wish I had. It’s easily one of the worst movies I’ve seen theatrically.

I’m not normally the guy that complains about bad effects.  I watch ‘Dr. Who’ after all, so I’m used to the CG looking a little clunky.  But ‘A Sound of Thunder’ had some of the worst digital effects of all time.  I swear I saw a two-dimensional car drive by.

What’s worse is that it’s based on a Ray Bradbury story.  Bradbury, if you’re not familiar, is the guy who wrote ‘Fahrenheit 451,’ ‘The Martian Chronicles,’ and a short story called ‘Rocket Man,’ which inspired the song of the same name.

Really, anyone could take this film and make it better.  My own personal nemesis Tim Burton could take this movie, cast Johnny Depp and Helena Bonham Carter in the leads, feature a score by Danny Elfman and design all the sets in his signature “style” and it’d still be an improvement. 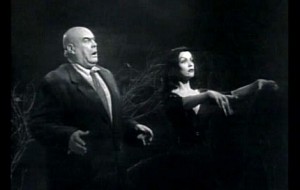 Admittedly, neither the movie nor the concept for the movie was very good.  ‘Plan 9’ is regarded as one of the worst movies of all time, and it’s a claim that’s hard to debate.  Shots are reused ad nauseum, the aliens are unthreatening and laughable, and Bela Lugosi’s scenes were filmed for a completely different movie.

So why bother remaking it?  Consider it a challenge.  It would take one hell of a director to take ‘Plan 9’ and make it good.  And no, that goofy Tor Johnson remake doesn’t count because it will be awful.  There’s a chance it may have the line “Time for go to bed,” though, which just might make it worth watching.

As far as the who goes, any director who’s looking for a challenge.  Joss Whedon would be an interesting choice, since he could either go the serious route, or take it in a completely new direction, like the ‘Little Shop of Horrors’ musical remake.

1. Overdrawn at the Memory Bank 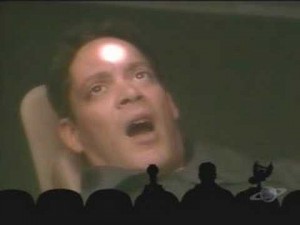 Alright, so here’s the skinny.  It’s the future, and people are controlled by limiting the amount of emotional and creative stimulation they can experience.  Aram Fingal, our hero as played by Raul Julia, is caught watching ‘Casablanca’ and is sentenced to compulsory rehab, which is a bit like the mental vacations in ‘Total Recall,’ but with animals.

Long story short, Fingal inadvertently ends up living in a sort of half-real version of ‘Casablanca,’ with him in the role of Rick.  It’s an interesting concept, and I’m a sucker for ‘Equilibrium’ style dystopian futures.  But boy was this movie bad.  So bad in fact that it got the ‘Mystery Science Theater 3000’ treatment.

The worst part of trying to figure out who gets to remake this is that someone would have to replace Raul Julia.  The movie is a love letter to classic cinema, and who better to take it on than Quentin Tarantino.  Sure it’d be a different take on the movie, but if you’ve seen the original you’ll know that’s exactly what’s needed.