This November, the redheaded stepchild of late night comedy comes back on the air. It’s going to be a big event, but in order to succeed, Conan needs to keep his audience in mind. He’s not the only one making a big move this year. Hulu is starting to charge for service and they need something big to draw people in. The way I see it, Hulu and Conan need each other badly.

Let’s start with everyone’s favorite late night funny man. Conan O’Brien has a dedicated audience, but it’s important to nail down just who that audience is. It’s not about age, race or gender – it’s about technological literacy. Conan’s audience is, to put a pretty large umbrella on it, the internet. Remember when he got the boot? “Team CoCo” was a trending topic on Twitter for weeks, tech blogs were exploding with Conan posts, and half of my Facebook friends changed their pictures in support of their preferred ‘Tonight Show’ host. None of them picked Leno. In the interest of honesty, one of them did pick Carson.

It’s this internet and tech savvy crowd that Conan appeals to. They’re using smartphones, they’re on board with streaming media, and they’re almost certainly fans of the free Hulu service. If Conan’s going to keep this crowd, he’s not going to do it without a little help from the internet. Getting his new show on Hulu would be a big step toward keeping those 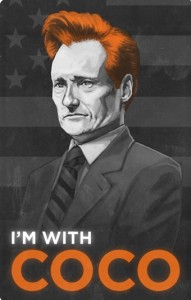 fans, especially since they’ll be able to bring up the show on their game consoles, Blu-ray players and even their phones to show to their friends.

Similarly, Hulu really needs to get Conan. His show is going to be a big draw – not because of the channel it’s on or the show that leads into it, but in spite of those things. That makes it perfect for Hulu. Conan’s show is going to be a success on its own merit – people will want to watch it no matter where it’s available.

Again, portability is key. As nice as it is to stream to a television, fans will already be able to get the show on their televisions. Watching Conan on the commute to work, on a lunch break or while waiting in line would be a great way to pass the time. Even better, people will be able to show off sketches and interviews to people they know. It’s always an event when a new Triumph segment hits. Rather than having everyone search YouTube, Hulu could make the clips available for easy access.

If it’s possible, Hulu needs him live. If fans could stream the show at the same time it’s airing on television, there’d be a nice group of people ready to kick cable in favor of Hulu. Even if they just use Hulu Plus as a supplement to their existing cable service, that’s $10 a month from each of those fans. It probably wouldn’t be a big enough group for cable companies to notice, but Hulu would notice.