As you all know, I’m a huge movie poster fan. I’m also a huge Alfred Hitchcock fan. So, when the Hitchcock Blogathon was announced, I just had to get in on it with a special Hitchcock-themed edition of Posterizing.

Old movie posters have a style and substance that have largely been lost in the commercially appealing but artistically lacking posters of today. Many of Hitchcock’s films featured wonderfully visual poster art that evoked a sense of what the movie was about. Below is a list of my top ten favorite Hitchcock movie posters.

Many of the posters advertising Hitchcock’s movies were split up into a block format, much like a magazine or tabloid cover. Hitchcock himself was usually pictured, and then the names of the movie’s stars were presented boldly. Much of the time, this amounted to a ho-hum poster, but ‘The Birds’ poster made up for it with devilish artwork of silhouetted birds attacking a screaming woman. The artwork is splendid here. Even though most of the poster is taken up by quotes and names, it still has some great art to show off. 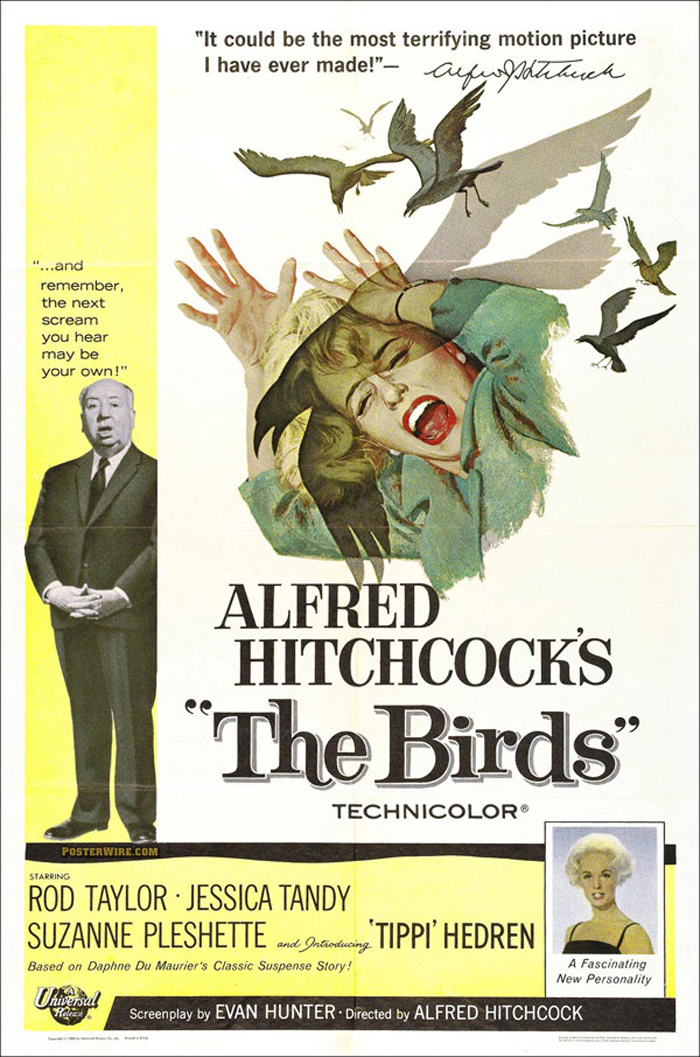 The only thing that puts this poster so low on the list is the strange decision to put a big blank box underneath the names of Cary Grant and Grace Kelly. Yes, they were ultra-mega stars at the time, but the box sort of ruins the great art underneath. The eye is drawn to the box, when instead it should focus on the beautifully sketched scene underneath. Still, the imagery on here reminds me of old comic book art. If not for that box, this poster would move up the list in a hurry. 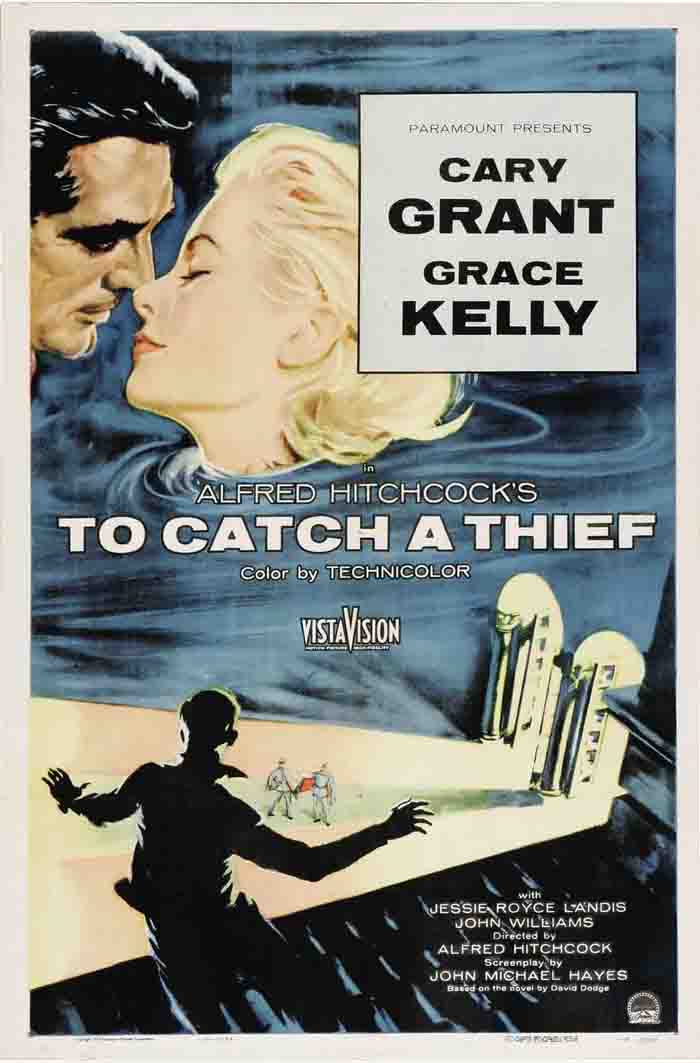 This French poster may be lesser known, but it’s hard to turn away from the overt sexuality, which was included here at a time when this sort of poster art would’ve been reserved for X-rated movies. Even today, a poster with a man ripping a woman’s dress off violently would probably be met with criticism. Look at the uproar that the American remake of ‘The Girl with the Dragon Tattoo’ caused with its nipple piercing poster. I laud this poster for its bravery, but also because its imagery instantly draws you to its subject. There’s really no turning away. 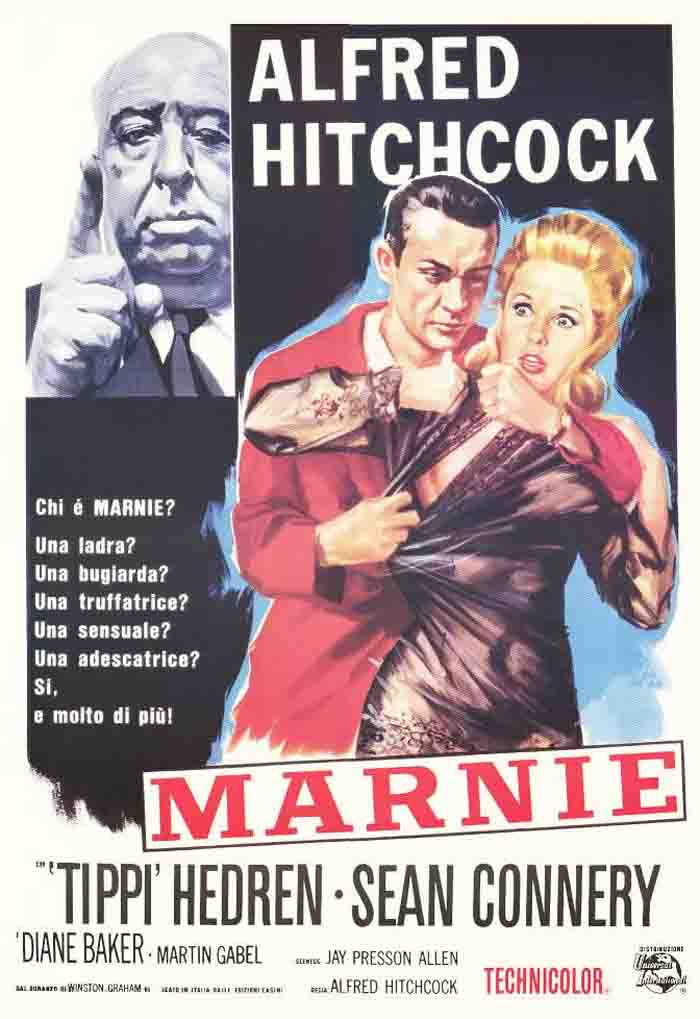 Seriously, what’s not to love about this poster? Everything from the playful typography to the placement of Cary Grant and Eva Marie Saint works to create an interesting yet mysterious depiction of the movie. It isn’t cluttered by names or weirdly placed boxes. Everything about this poster makes you want to see this film. If I had an original, I’d certainly frame it and hang it in my house. 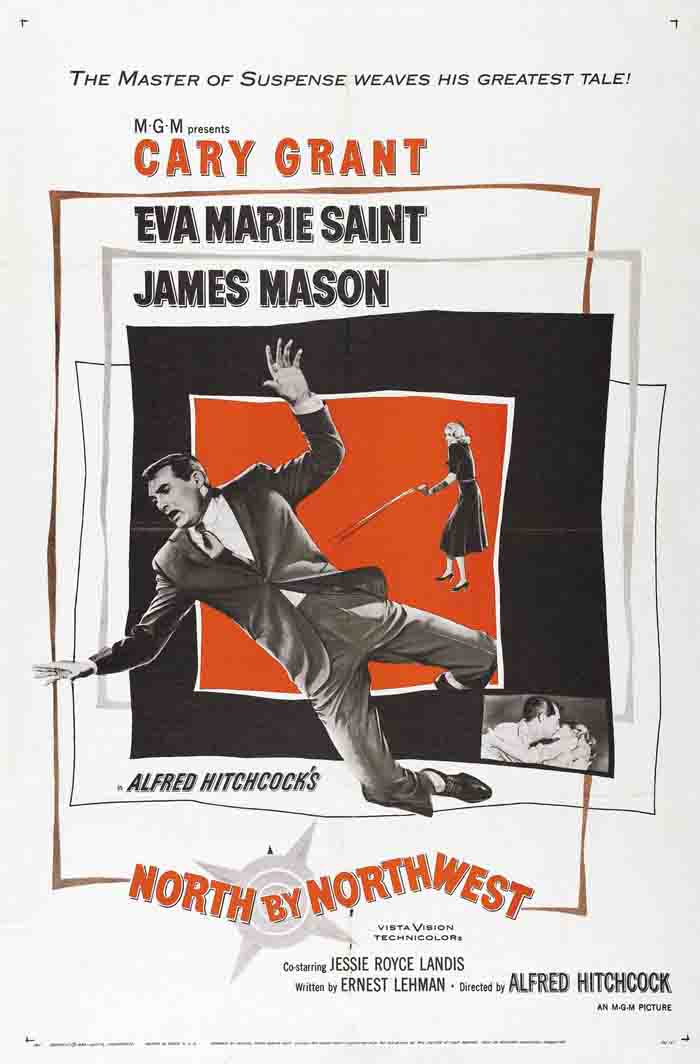 After I’ve railed against posters with names that get top billing over the artwork, you might wonder how the name-laden poster for ‘Lifeboat’ made it so high up on my list. There’s just something about this poster that screams “novel cover” to me. I love it. I love how the names don’t take up a majority of the artistic space, and are instead blended in such a way to create an overall artistic whole. With an ensemble story such as this, it was imperative to introduce all the characters, and I thought that this was the perfect way to do it. 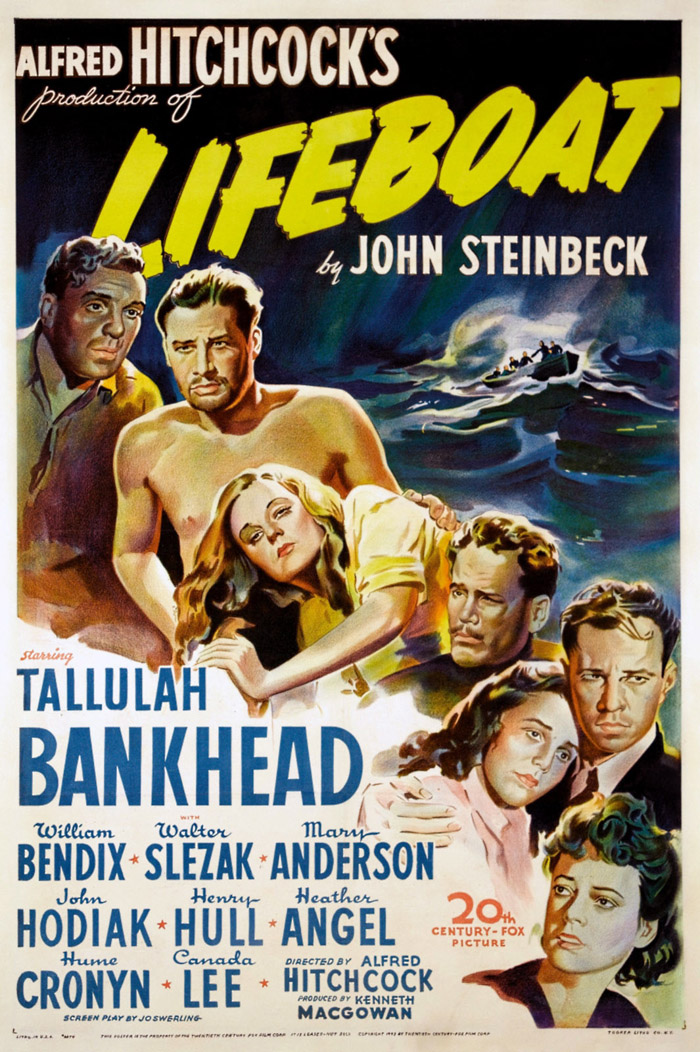 There are a few posters for ‘Rear Window’, my all-time favorite Hitchcock film, but this one is the best in my opinion. It captures everything that the movie is about. It captures the movie’s suspense, sexuality and mysteriousness. The real genius with this design is the choice of typeface color. The light blue actually blends nicely with its red brick surroundings. Even though it’s plastered right in the middle, you can still focus on the artwork without being distracted. 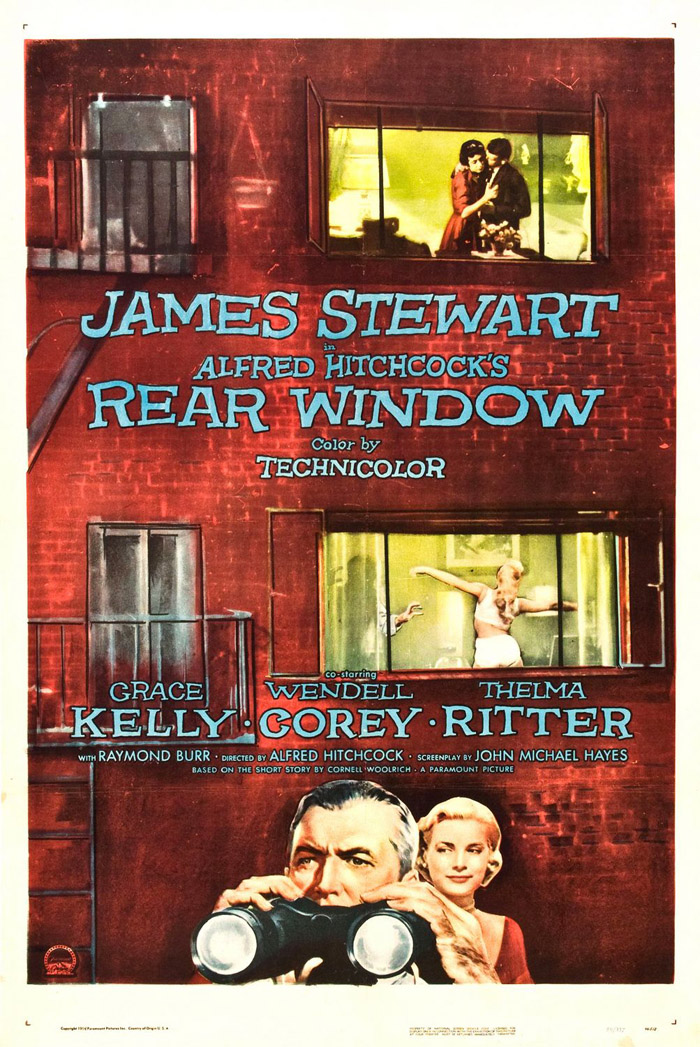 I wish that movies nowadays would play with head placement in their posters. There’s something just slightly off about the placement of Teresa Wright’s head in the bottom right corner, but it plays tricks with your mind, especially with the looming shadow above her. 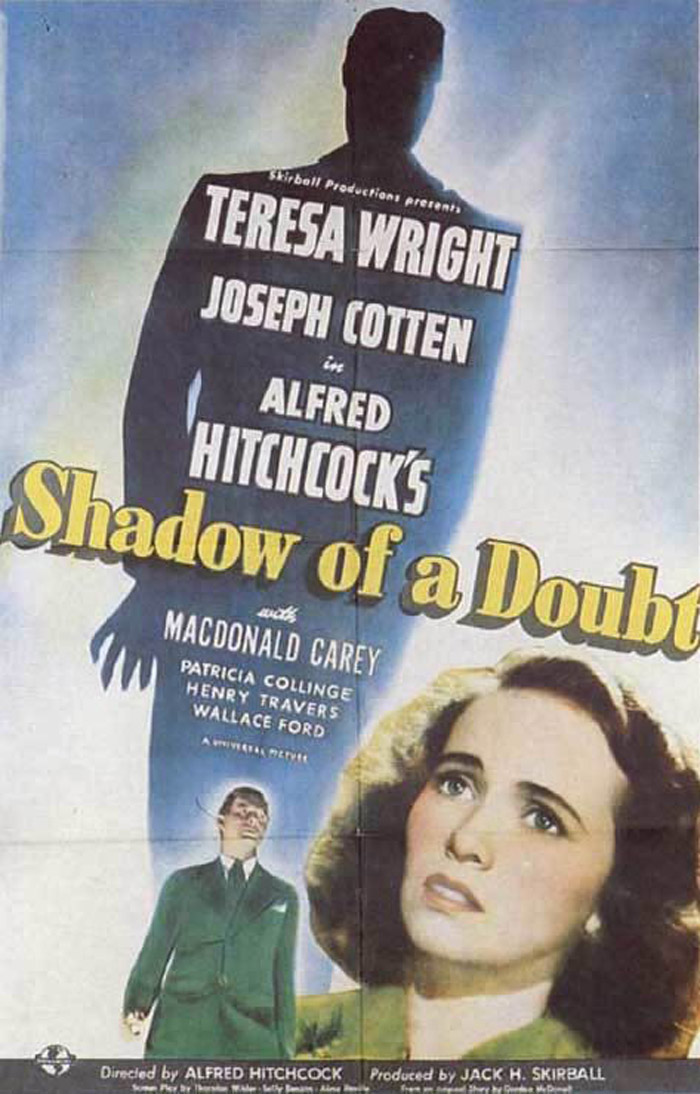 This is one of the most perfect Hitchcock posters out there. Names have been relegated to the bottom, while the title and artwork take main stage. Like the ‘Marnie’ poster, it’s almost impossible not to focus on the woman struggling to reach the phone. You get a perfect sense of what you’re in for when you finally sit down to watch the film. Plus, the artwork is killer. It forgoes the usual route of displaying the face of the star prominently, and instead successfully conveys the tension in the film. 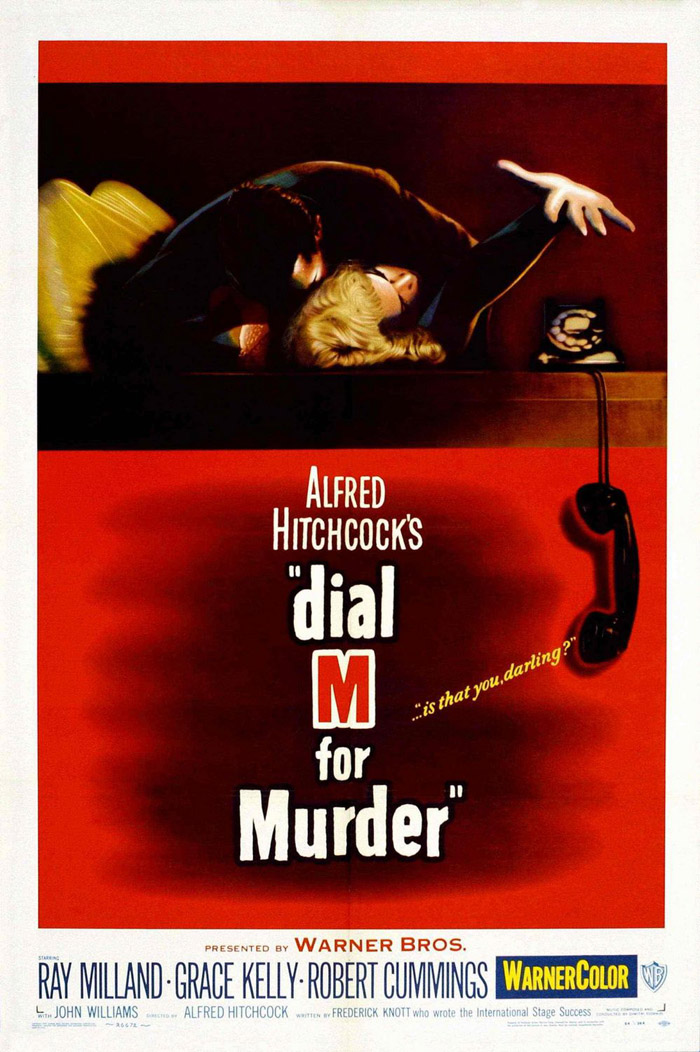 Perhaps it’s the black and gray juxtaposed with the off yellow, or maybe it’s the Playbill feeling of the whole thing. Whatever the case, this is one of my favorite Hitchcock posters. The black and gray artwork pops against the yellow background and creates a very surreal viewing experience, almost like a pop-up book. This is a wonderfully designed poster. 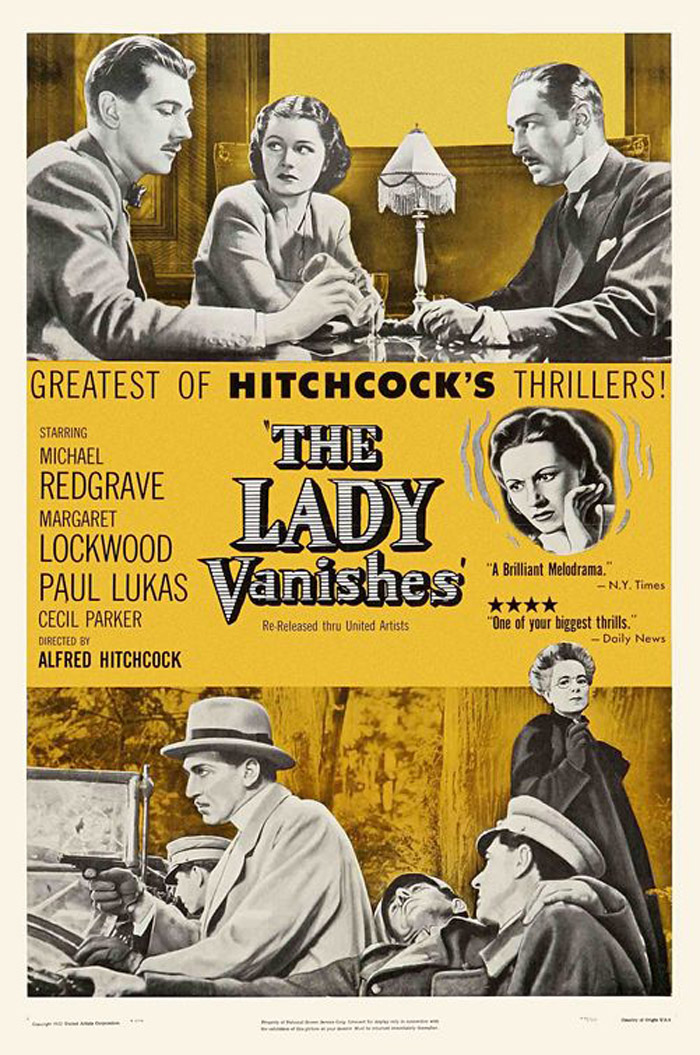 This one probably comes as no surprise. It’s one of the most famous movie posters of all time, and definitely one of the most recognizable. Even if you were to cover up the title at the bottom, most people would still be able to tell you what movie this poster was for. The whirling vortex sucks your eyes in and plays tricks on them. Even with two big-name stars like Jimmy Stewart and Kim Novak in the movie, neither of their likenesses was featured in this poster. Instead, you have a beautiful work of art that conveys the uneasy feeling of the movie. 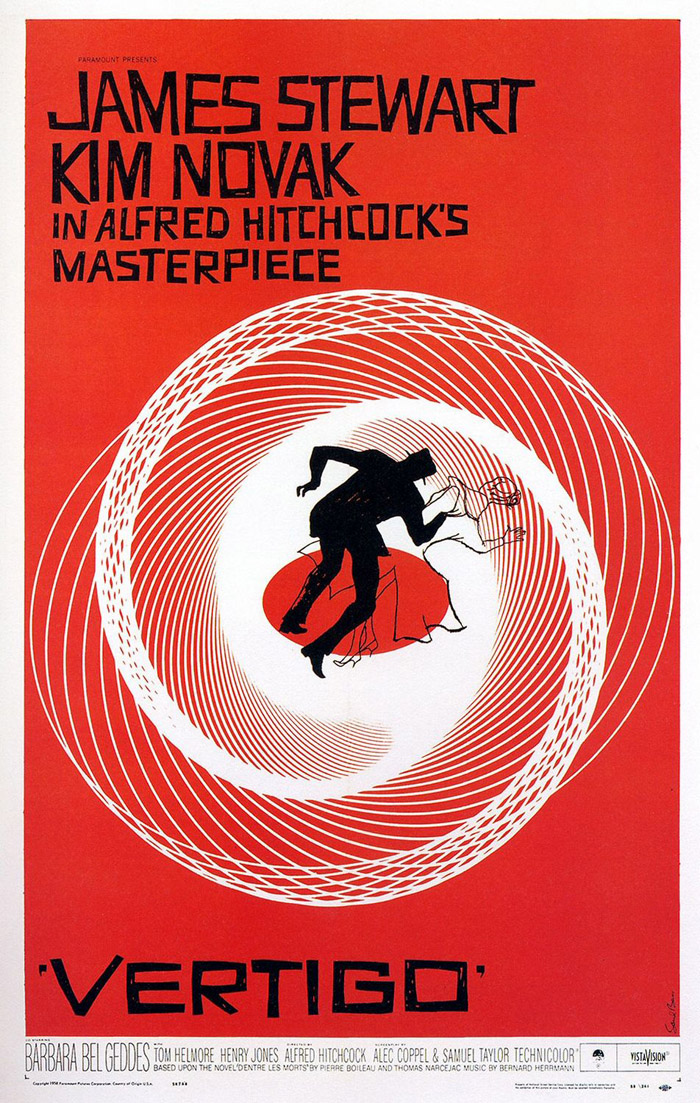 Just recently, an art gallery in California called Gallery 1988 did a Hitchcock-themed show where it commissioned a whole group of artists to do their own takes on Hitchcock and his movies. This is the piece I purchased from that show. I’m just waiting to get it framed. It’s from the artist Dave Perillo, and it’s even more beautiful in person. 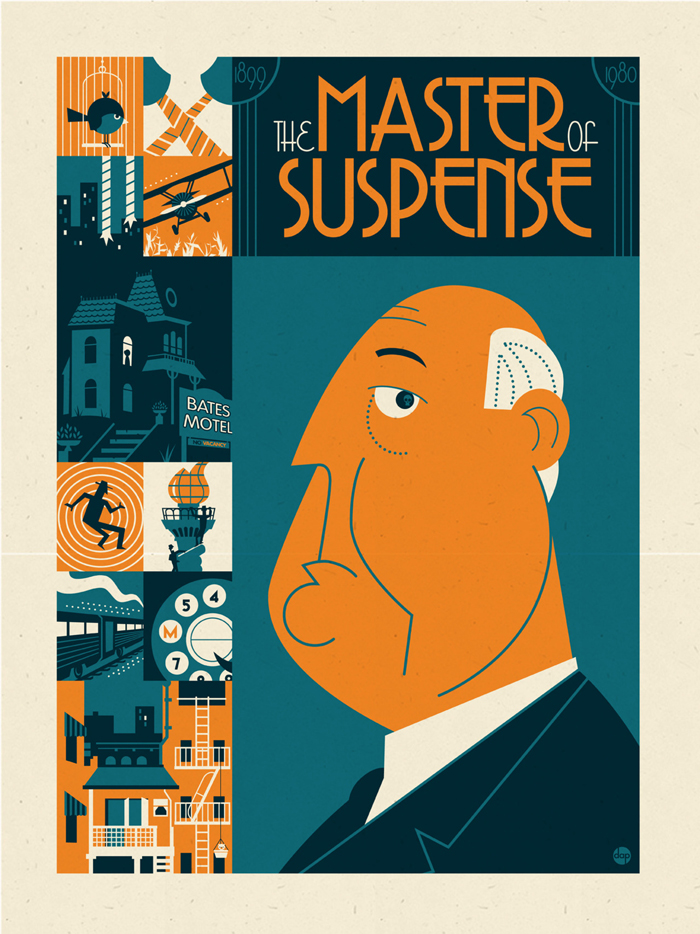 In association with the National Film Preservation Foundation, High-Def Digest is proud to join the 2012 Hitchcock Blogathon. During the week of May 14th to 18th, we will blog about topics related to the films and career of the legendary Sir Alfred Hitchcock. This year, the NFPF hopes to raise money to fund a new musical score and online streaming distribution for ‘The White Shadow’, an early silent film that young Mr. Hitchcock (then officially a writer and Assistant Director) used as a stepping stone to launch his own directorial career. To contribute, please visit the NFPF’s donations page.

For additional information, also see the NFPF web site page or the Self-Styled Siren, Ferdy on Films and This Island Rod blogs.