Tuesday is a crowded night for HDTV viewing in my household. I have no fewer than 4 shows set to record that night each week. ‘Lost’ is of course Day 1 appointment viewing, and will merit its own post in this blog. I really like the new FX series ‘Justified’, but I usually push that one back to watch later in the week. Honestly, sometimes it gets backlogged on the DVR. The remaining two shows make an odd pairing, to be sure. Both ‘Glee’ and ‘V’ started with great potential. Both have had their share of ups and downs in their respective first seasons.

Glee ‘The Power of Madonna’

‘Glee’ is the better show. I feel confident in saying that. At its best, it’s brilliantly infectious fun. I love the cast. I love the songs. The blatant lip-syncing (and sometimes auto-tuning) is annoying, but I can deal with it. Jane Lynch consistently steals the show as the sociopathic cheerleading coach Sue Sylvester. She damn well better get an Emmy for this. 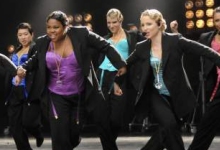 The first half of the season had two very irritating and very dumb storylines, in which Will Schuester didn’t realize that his wife was faking her pregnancy, and Finn believed that he somehow impregnated girlfriend Quinn even though they never had sex. Both characters are supposed to be dim bulbs, but these subplots definitely strained credibility the longer they went on (especially Schuester’s story). Fortunately, the writers must have realized this, and brought both to conclusion by the time the show went on hiatus in December.

Since coming back from the break, ‘Glee’ has been pretty consistently good. Last week’s episode, ‘The Power of Madonna’, seemed a little forced, though. I never believed Sue’s obsession with Madonna. It felt out of character. And with the constant plugging of Madonna songs, I’m surprised that Madge herself didn’t pop in to hawk a new Greatest Hits collection or something. On the other hand, the episode had a lot of great background gags, like the hilarious pamphlets in Ms. Pillsbury’s office and all the students wearing outfits from classic Madonna videos. I also like the fact that the two bimbo cheerleaders, Brittany and Santana, finally have real storylines and seem to be coming into their own.

Jane Lynch’s shot-for-shot remake of the ‘Vogue’ video using the show’s cast was the most uproariously funny thing I’ve seen on TV this season… when I saw it the first time during the previous episode. I’m perplexed by Fox’s decision to run the whole thing as a promo when they must have known that it was meant to be part of this episode’s plot.

My main fear for this show is that it will suffer the Ryan Murphy curse. His last series ‘Nip/Tuck’ had a brilliant season or two, and then steadily slid into decline. By the end, it was infuriating. Also, any show set in high school must face the inherent challenge of how long it can plausibly keep the characters around. They’ve got to graduate eventually. Nobody wants another ‘Head of the Class’ situation, where a bunch of 30-year-old actors are allegedly stuck in the 10th grade for 7 years.

On a very different note, we have ABC’s remake of ‘V’. I was a huge fan of the original 1983 miniseries back in the day. I watched it again when it came out on DVD a few years back, and it still held up pretty well. Low-budget 1980s TV special effects notwithstanding, it had a great premise and a strong script. The following year’s sequel miniseries (‘V: The Final Battle’) and subsequent weekly series were both pretty terrible, but were still fairly entertaining for sheer camp value if nothing else. 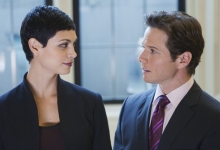 In comparison, the remake is kind of generic. It’s solid sci-fi entertainment, but not particularly daring or original. The production values and visual effects are generally better than the old show, but for some reason the CGI on board the Visitors’ ships is the fakiest green screen work I’ve ever seen. Also, exterior shots of the motherships look too small as they hover over Earth cities.

I find it really grating the way all the human characters refer to the Visitors as “Vees.” It just sounds forced and artificial. I still love Elizabeth Mitchell from her time on ‘Lost’, but I’m not really buying her as an FBI agent. And the storyline with her annoying teenage son needs to go. The fact that he’s named Tyler, which is supposed to be a reference to Michael Ironside’s badass character Ham Tyler from the original, is just offensive to me. Honestly, that kid better become lizard food before the end of the season.

By far, the best part of the new remake is Morena Baccarin as the Visitor leader Anna. Through body language alone, she very subtly manages to convey an inhuman nature without drawing attention to herself. Pay attention to the way she double-blinks quickly like a lizard. It’s a great performance. She’s nice to look at too; that doesn’t hurt.

I don’t have much to say about last week’s episode, ‘We Can’t Win’. Pregnant Val, who doesn’t know that she’s carrying a lizard baby, finally started to realize that something is wrong. Tyler joined the Thousand Mile High Club when his lizard girlfriend took him Parking in a shuttlecraft in low Earth orbit. Anna won over world leaders by rescuing Third-World tsunami victims and unveiling the gift of “Blue Energy,” which is supposed to help us solve the world energy crisis, but will very likely have nefarious consequences yet to be revealed. And that’s about it.

The ratings for ‘V’ have been in decline since the Fall premiere. The show was particularly hard hurt by the long hiatus after the first 4 episodes. I think it would have done better had it run continuously. But people forgot about it, and weren’t interested enough to pick it up again when it came back. Its prospects for a second season renewal look pretty bleak. I hope the writers give us some closure in the season finale, and don’t just leave us hanging with a cliffhanger that will likely never be resolved. That’s what happened to ‘V: The Series’ in 1985. I’m still waiting to for the return of Diana, evil lizard diva and undisputed Bitch Queen of the Universe. The new show desperately needs a character that juicy to spice up the proceedings.