Fred Willard guest stars in an excellent episode of ‘Modern Family’ that puts Cameron behind a drum set and Manny in fear for his life.

‘Modern Family’ is preying upon on of my greatest comedy weaknesses and I couldn’t be happier.  It was nice to get a bit of Fred Willard in the Christmas episode ‘Undeck the Halls,’ but his expanded role in ‘Travels with Scout’ really showcased his hard to define comedy stylings. 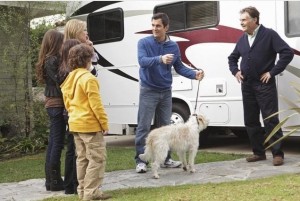 The interactions between Phil and his dad Frank (Willard) are the highlight of the episode.  They so earnestly bounce bad jokes off of one another that it’s nearly impossible not to laugh.  There’s a right way and a wrong way to deliver bad jokes, and both actors do it the right way.

The main story of the episode easy to relate to.  Everyone’s got a friend or a family member who they really never talk to seriously.  Crossing that line can be awkward and uncomfortable, and when it’s your dad it can be even stranger.  The big reveal – Frank wanting to keep the dog – was an odd way to end things.  It was a pretty big anticlimax, but hopefully it’ll pay off in a future episode.

The episode was written by Paul Corrigan and Brad Walsh, who also penned ‘Fizbo,’ one of the strongest episodes of the season.  Just like in ‘Fizbo,’ we got a peek at yet another of Cameron’s former pastimes; this time it’s the drums.

Cam’s audition for Dylan’s band was funny, as was the “You should really label those sticks” joke that followed, but the concert itself was a letdown.  The idea of a seemingly unending drum solo is ripe for comedy, but it’s not a joke in itself.  It seemed like there was room for something a lot funnier there, but it just didn’t happen. 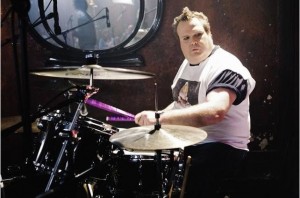 Manny and Jay had a good, but short, part in last night’s episode.  The buildup of Manny being terrified of a horror movie was strong, but, like the other segments, the payoff just wasn’t there.  There was a comedic situation and an opportunity for a good joke, but it just didn’t come.

In all, this was a good episode, but not the best.  It ended poorly, but the strong beginning more than made up for it.