In his latest movie, ‘The Grand Budapest Hotel’, Wes Anderson has created a murder mystery wrapped in a caper, hidden in action movie, that’s ultimately another of his broken family fables. Somehow it all works. In fact, it’s rather wonderful and just might be his finest film since ‘The Royal Tenenbaums’.

Like all Anderson movies, ‘The Grand Budapest Hotel’ is stylized with the precision of Stanley Kubrick on a gallon of espresso. Every frame is meticulously designed, every character is cast with an actor who gives him or herself over to the deadpan house acting style, and the script shoots for a tone pitched between New Yorker cartoon whimsy and New Yorker J.D. Salinger melancholy. Anderson has almost become the new Woody Allen, creating films that fall predictably within a particular directorial mandate cast in stone at some point in the middle of ‘Rushmore’ and ‘Tenenbaums’. Yet the joy of watching an Anderson picture (like Woody at his best) is seeing what he’s able to accomplish within his parameters this time.

Unfolding in flashbacks within flashbacks (each amusingly distinguished by a different aspect ratio), we’re introduced to the narrator known only as Author (Tom Wilkinson), who tells the story of the meeting he had as a young man (Jude Law) with the mysterious owner of The Grand Budapest Hotel (F. Murray Abraham). However, the real story at the heart of the film is the one that Abraham tells about his time as a lobby boy with a penciled-on mustache (Tony Revoloir) working for the dapper, foul-mouthed, perfectionist M. Gustave (Ralph Fiennes). 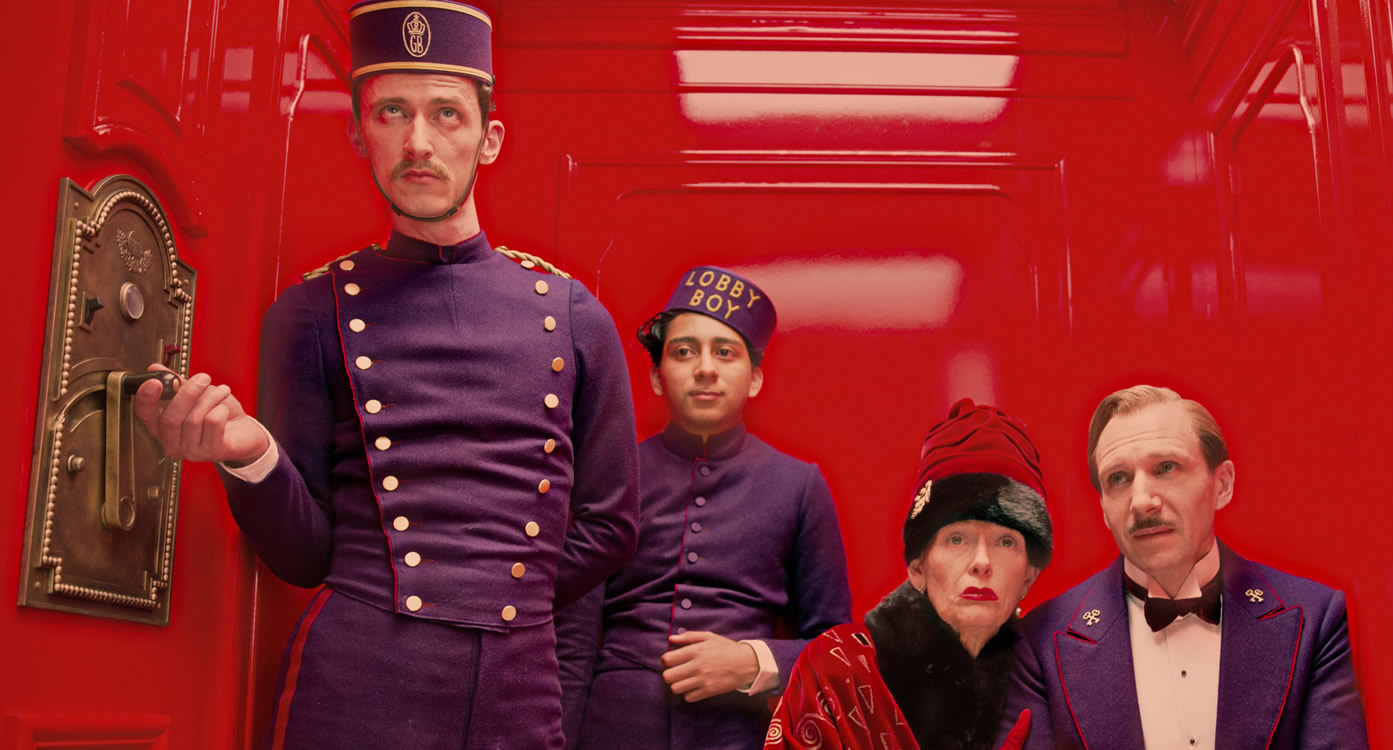 Gustave was a difficult yet charismatic man who loved his job only as much as he loved seducing the wealthy old ladies who stayed in the hotel. One of these elderly trysts was with Madame D. (Tilda Swinton covered in old age pancake makeup), the owner of the Grand Budapest who gifted the hotel and a priceless painting to Gustave in her will. Unfortunately, her children (who look like they were drawn by Edward Gorey) don’t take too kindly to that decision. Led by a dastardly Adrien Brody and his assistant Willem Dafoe (whose performance is essentially a collection of exquisite snarls), the kiddies lead an attack on Gustave in an attempt to ruin his life and steal his inheritance. An adventure kicks off involving an SS military organization led by Edward Norton, a secret society of hotel managers led by Bill Murray, a prison escape led by Harvey Keitel, and of course roles for Jeff Goldblum and Owen Wilson. If that all sounds convoluted, fear not. In Anderson’s capable hands, it plays like a tightly wound Swiss watch with a spectacular soundtrack.

Like everything Anderson makes, the film is gorgeously designed with stunning eye candy that enhances the emotional rollercoaster at the center. The performances are superb – particularly Ralph Fiennes, who plays the finest lovable Anderson a-hole since Gene Hackman and shows off some physical comedy chops that I doubt he even knew he had. The jokes flow freely and the emotional core stings. 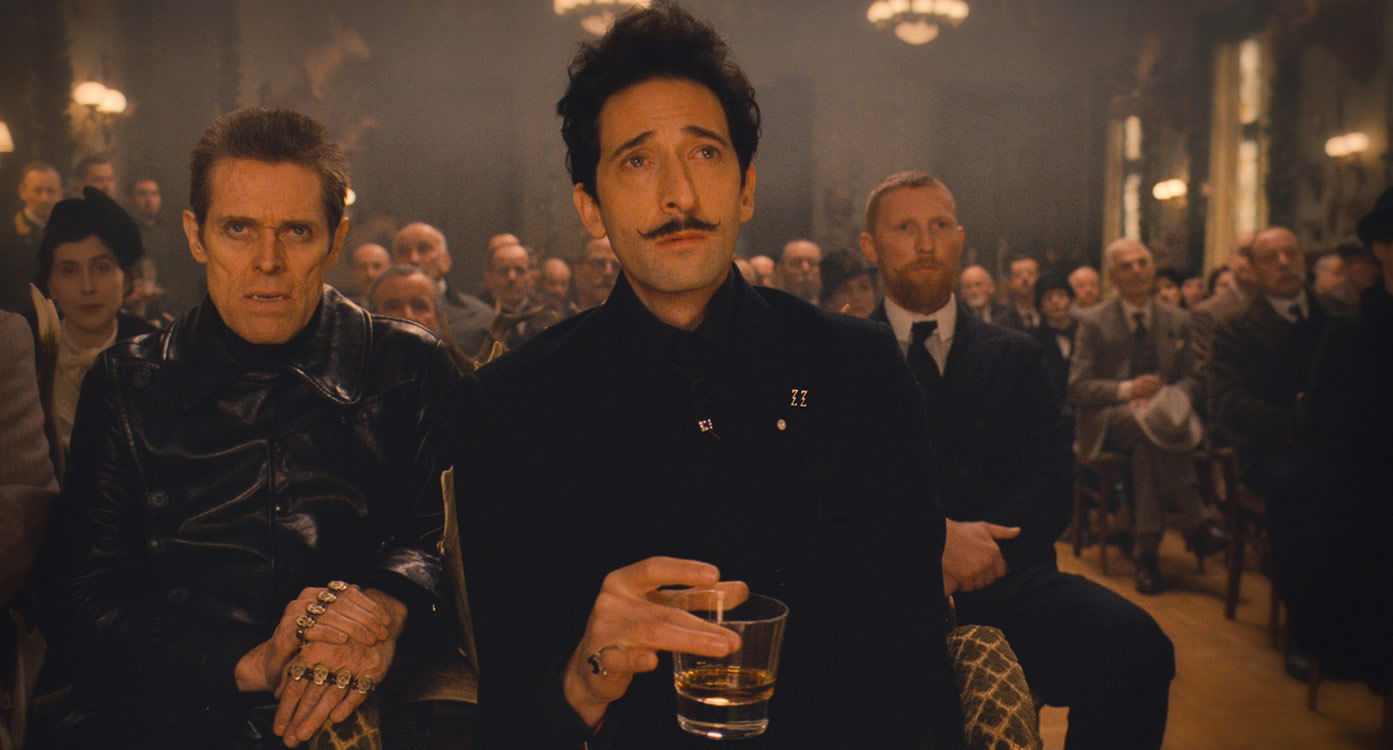 The movie does everything we’ve come to expect from the director, only this time with suspense, violence and action sequences. Anderson attempted these things before in ‘The Life Aquatic’, but they felt somewhat awkwardly staged and tonally inappropriate. Here, Anderson stages Bond-like chases sequences with deliberately archaic miniature effects that perfectly fit into his world and are both genuinely exciting and winkingly hilarious. The film feels like an expansion of his filmmaking style into the adventure genre territory while still delivering everything expected from his rigidly defined style and aesthetic.

The film may not win over anyone who has already written off the endlessly influential and imitated director, but the Wes Anderson converts and cultists will swoon at one of his most satisfying efforts. As much as Anderson has shown enough of his directorial hand at this point that audiences can walk into his movies knowing exactly what to expect, his ability to make the old tricks feel fresh again never ceases to amaze. ‘The Grand Budapest Hotel’ might be just another Wes Anderson movie, but the filmmaker has created such a magical rut for himself that it’s impossible to mind.

Phil Brown loves movies too much. He rants and raves about them privately to anyone who will listen, as well as professionally for outlets like Fangoria, Rue Morgue, the Toronto Star, Now Magazine, AskMen, C&G Magazine, and anyone else who will return his emails. You can follow him on Twitter @thatphilbrown.
View all posts by Philip Brown →
Facebook
Twitter
Google+
Linkedin
Pinterest
Delicious