Are you a sci-fi nerdfan? If so, there’s a good chance that you enjoy Joss Whedon’s cult sci-fi TV series ‘Firefly‘. Next question: Are you doing anything this summer holiday weekend to showcase your nerdomfandom? No? Well, why don’t you whip up this tasty yet weird ice cream treat featured as a throwaway gag in one episode of the show? What, you have better things to do? I didn’t think so.

As seen in episode ‘The Message’, this oddball concoction called an “Ice-Planet” is basically a ball of ice cream dangling from a string on a stick. After several attempts to eat such a thing, River Tam declared, “My food is problematic.” Apparently, that hasn’t stopped fans from trying to recreate the goofy dessert.

How do you get a ball of ice cream to dangle from a string on a stick? Visit the Tasty Planner blog for all the instructions. 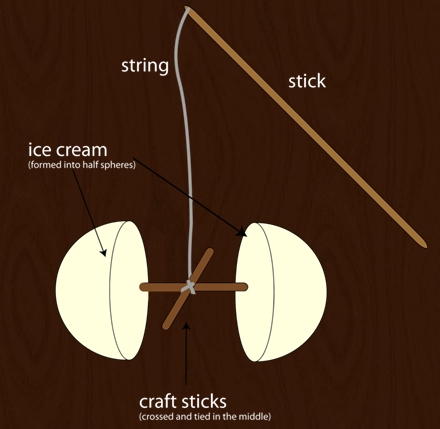 Try not to make too much of a mess eating it while plowing through a marthon of the show on Blu-ray.