I guess you guys liked our photo caption contest, didn’t you? Consider that noted. We had a huge turnout for our contest to win a free copy of ‘The Exorcist‘ on Blu-ray. Reading through the entries was a lot of fun. And now, ladies and gentlemen, we have a winner. Follow after the break to find out who won.

The rules were simple. All we wanted was a funny caption for this famous image from the movie, and we opened it up so that you could enter as many times as you liked. 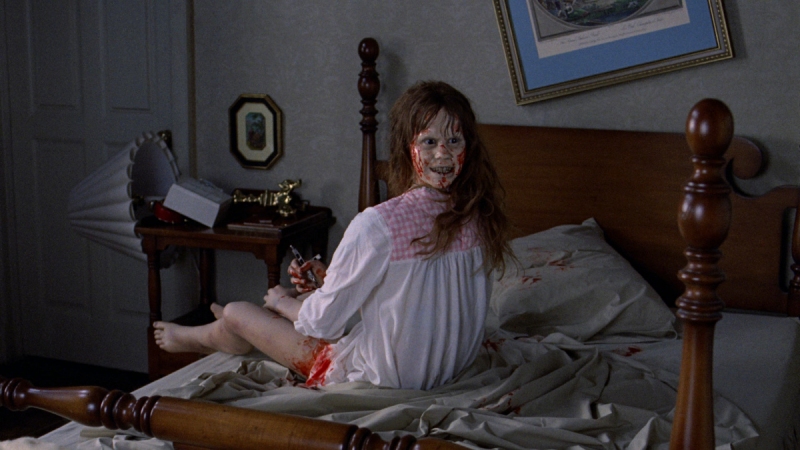 Boy, did you guys provide! We received a flood of entries. More than that, we received a flood of really great entries. So very, very many of them made me laugh. Unfortunately, I don’t have the space to highlight them all here. I highly recommend reading through all the responses to the original post. Selecting only a handful of Honorable Mentions and one Winner was incredibly difficult. I really feel bad about having to pass over some genuinely hilarious captions. Sadly, that’s just the nature of contests like this.

So now, without further ado, here are the…

Normally, I try to whittle down the results to 5 Honorable Mentions. I found that just impossible this time, so I had to expand to at least 15.

Let me start with a couple of captions that I really feel dumb for not coming up with myself. For example, Jim gave us this classic ‘Spaceballs‘ reference:

“Why didn’t anyone tell me my ass was so big?!”

Several people thought of this next one, but Jeff was the first:

Now for some other great ones. Frank said:

I’m so evil that I don’t even need CGI.

Except in the stupid “Director’s Cut,” of course.

These next two are simple but very effective. Brent said:

You could have knocked first!

A. Ayala gave us these two:

What did you say about Justin Bieber?

Ladies, do you ever wake up with that “not-so-fresh” feeling?

The sequels are so bad I can’t bare to watch.

Flexibility in bed is always a good thing. Plus she’s got cute feet. I say go for it, dude.

Mystic Pizza gave us these:

…and then the three little bears got home and found the little girl in their bed. She had eaten their porridge, slept in their beds, stabbed herself in the crotch with their Crucifix, and broke their bedposts. And that children is why we lock our doors when we leave the house.

“Billy, I stopped being able to look forward 4 takes ago, how about we break for lunch?”

“You think the Truffle Shuffle kid had it bad? Try having people constantly ask you to do this shit.”

“As you can see, Father, my coke habit has gotten a little out of hand.”

Hey, look! I am ruining a 5-year-old boy’s life as we speak! Isn’t that awesome!

I think I had much the same reaction.

This one slays me. In case anyone out there isn’t familiar with the reference, please be sure to familiarize yourself with ‘The Room‘.

This is the exact moment when Christine O’Donnell transitioned from witchcraft into her anti-masturbation phase.

Finally, Brandon was a really good sport. Even though he won our last contest (and thus wasn’t eligible to win this one), he gave us a bunch of fun responses. Here are some of his best:

“Mother? What’s wrong with me?” “Well sweetie… I’m not sure how to tell you this… but I think you’ve got a little ketchup on that pretty little face of yours.”

“Told you I was Double Jointed.”

“No one thinks they’ll lose their virginity to a Crucifix. Meth will change that.”

“OH CRAP! THAT’S IMPOSSIBLE!” “I know right? Febreze you plug into the wall!”

That last one made me laugh out loud at work. I can’t tell you how ridiculous I find the onslaught of stupid air freshener commercials on TV these days.

There were so many other great entries. Please don’t feel discouraged if yours isn’t featured here. These cuts were very painful to make.

Shayne is a good trooper who has entered and routinely gotten Honorable Mentions in our previous contests. He really went to town on this one. If I haven’t miscounted, he submitted 17 entries, most of which were hilarious. Here’s a sample of some of his funniest.

“Look at your man, now look back at me…”

The writers were really stretching for new super-powers in the final season of Heroes.

What happens in Vegas stays in Vegas.

But this contest wasn’t won based on volume. Nor did I choose him just because I felt bad that he hadn’t won any of the prior contests. No, Shayne legitimately won this one based on merit. This last entry of his made me laugh harder than any other we received:

Damn, that’s funny. I can practically see David Caruso taking off his sunglasses as he says it.

Congratulations to Shayne for winning ‘The Exorcist’ on Blu-ray! And thanks to everyone else who entered. This contest was a blast. We’ll try to do this again as soon as we have another good prize to give out.