After seeing ‘Dunkirk’ on a digital IMAX screen, I gathered a couple friends, hopped in my car and road-tripped over 500 miles one way just to watch it in the rare format in which Christopher Nolan intended it to be seen – 70mm IMAX. I lived to tell the tale.

Event films are going the way of the dinosaur. Expensive blockbusters are now year-round and franchises pump out their anticipated next installments at least once per year, so it’s not often that movies drop with a great deal heightened anticipation. ‘The Force Awakens’ is the last one that comes to mind, but now that ‘Star Wars’ delivers frequent releases, the series doesn’t build the pre-release suspense that it used to. Sequels are so abundant and internet-created buzz is so prevalent that hype is fading. Event films like ‘Jurassic Park’ and (gulp) ‘Avatar’ don’t come around often. While I acknowledge that Nolan’s latest may not play on the same “event” level as the aforementioned titles, it plays on a cinematic scale that’s so big it has to be regarded in the same ranks. 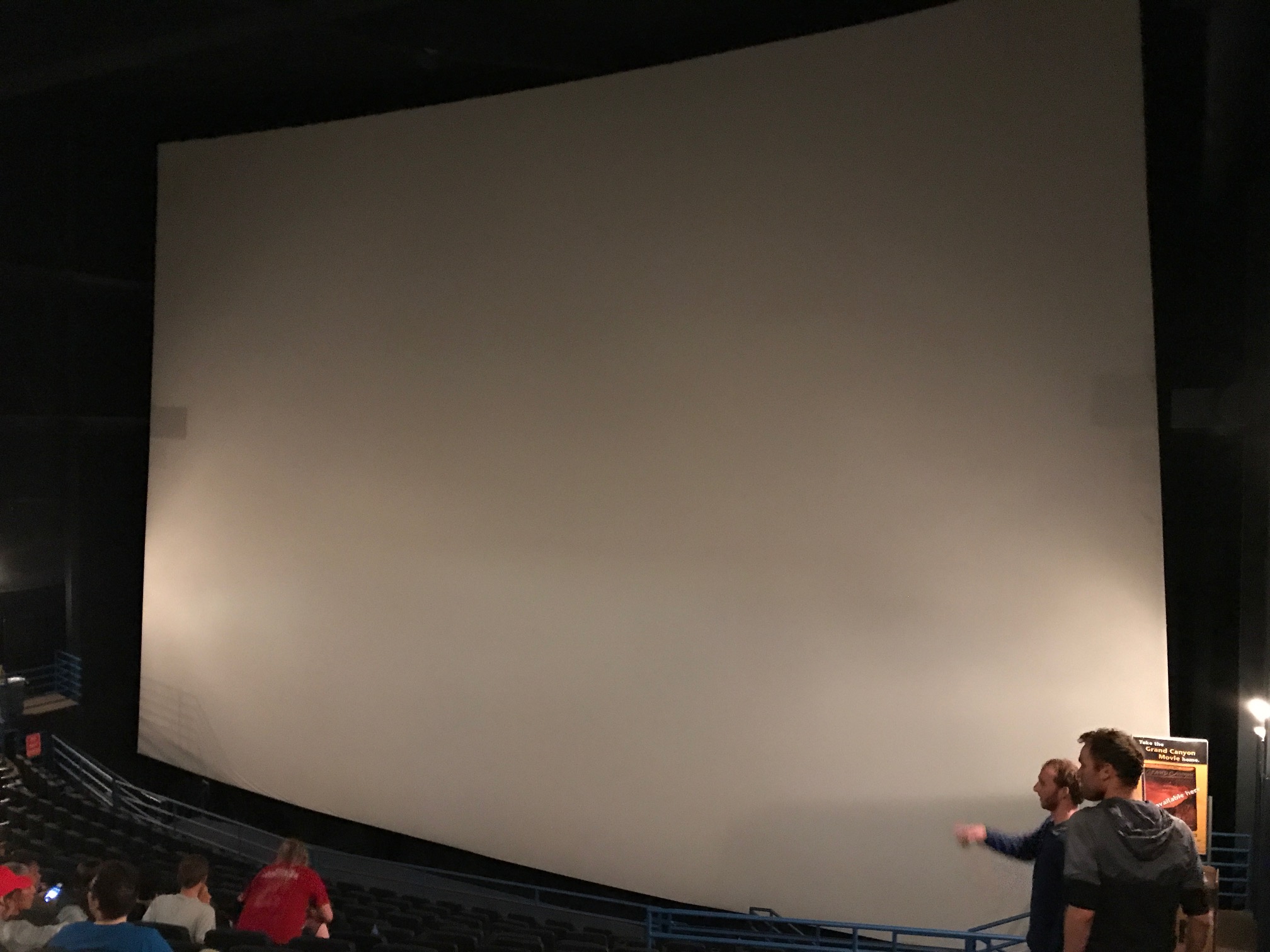 It’s said that Nolan shot between 70 and 80% of his World War II epic on 15-perf/70mm IMAX film and the remaining 20 to 30% on wide 65mm film. Keep in mind that while 70mm IMAX and 65mm film are nearly the same width, the IMAX cells feature a much more open aspect ratio. 70mm IMAX is 1.43:1, while the 65mm film is 2.20:1. The digital IMAX screen where I first saw ‘Dunkirk’ was formerly a print IMAX theater that tossed out its 70mm projector over ten years ago. While it retains the original IMAX setting – steep seating, a massive screen and excellent sound – the movie is projected at a cropped 1.9:1 aspect ratio. The grandeur of the screen and the sound make the moviegoing experiences there worlds better than those on smaller “LIEMAX” screens, but for films like ‘Dunkirk’ and ‘Interstellar’ that feature loads of true IMAX footage, they’re still missing the bigger picture.

I reside in the greater Salt Lake City area. When ‘Interstellar’ opened on 70mm IMAX, the studio pushed the release to as many of the rare locations as possible. Less than six hours away, Las Vegas was the closest theater to me. I expected to be able to attend the same screen for ‘Dunkirk’, but this release is even more limited than ‘Interstellar’. Although the capability exists there, none of Las Vegas’ print IMAX screens would make the list. Instead, the closest would be an eight-hour drive to the south rim of the Grand Canyon, a place so remote that its nearest highway is approximately 45 minutes away. Run by National Geographic for the sole purpose of showing a 70mm IMAX documentary titled ‘Grand Canyon: The Hidden Secrets’, the six-story theater would finally show a Hollywood film for this limited release of ‘Dunkirk’. How it became one of only 25 theaters in the U.S. to show the film in the 70mm IMAX format, I have no idea. 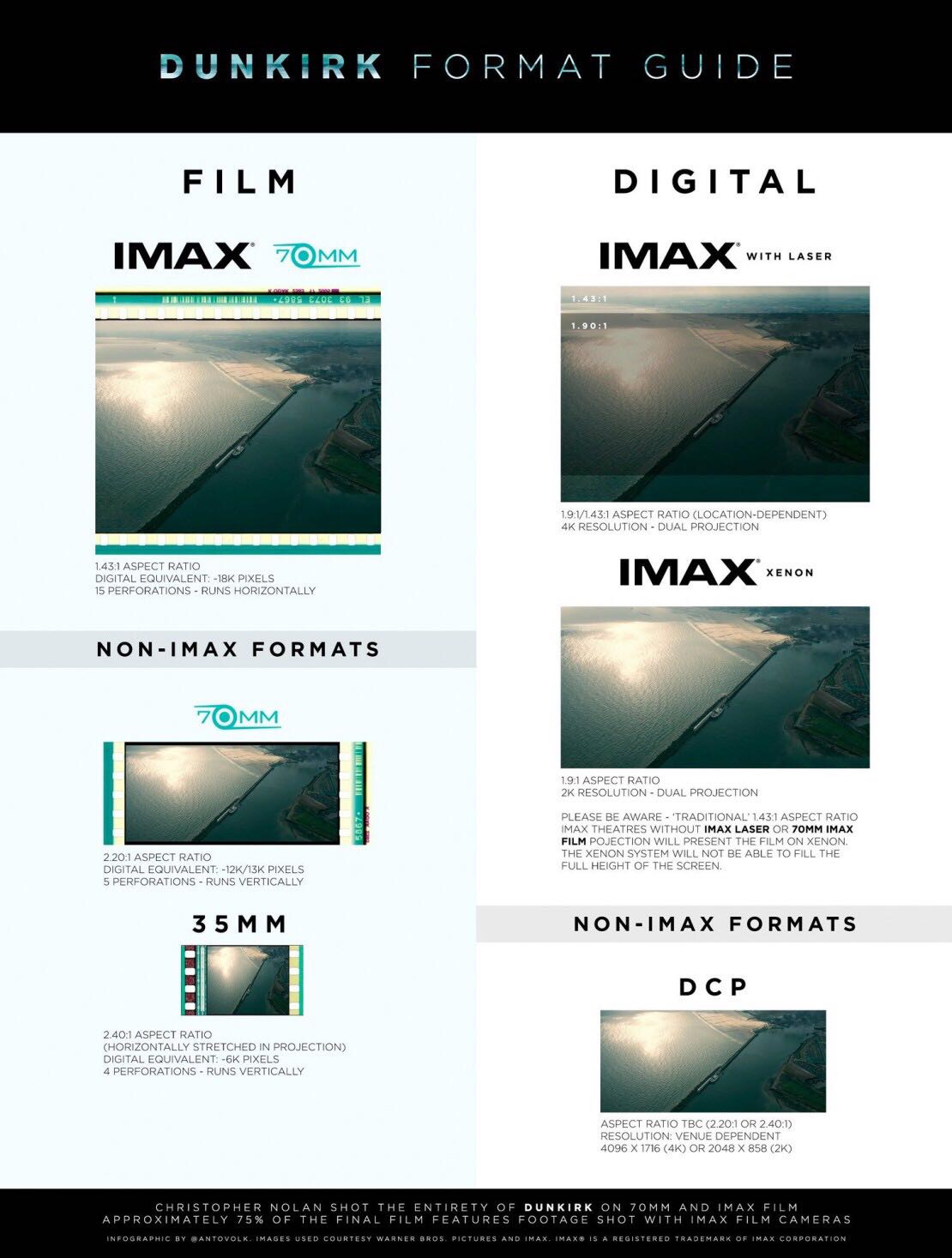 Not functioning like standard movie theaters, there was no way to purchase opening night tickets in advance, so I reached out to the National Geographic Visitor Center and explained my situation. “I want to see ‘Dunkirk’ on 70mm IMAX. I’m going to write an online post about the digital and celluloid experiences, and I’m willing to drive 518 miles to see it at your theater. Can I buy guaranteed opening night tickets?” I quickly heard back from theater managers Janet and Marty, who not only let us purchase our tickets in advance, but they rolled out the proverbial red carpet for us when we arrived. They took us into a VIP soiree and introduced me to Gary Harbison, a senior audio specialist from IMAX who had flown out from Alabama to re-calibrate the audio system just for the ‘Dunkirk’ showing. We sat and talked with Gary for a long while. He explained to us the type of system in this specific theater – how it’s filled with lots of IMAX’s older tech, but still very capable and dependable. We talked about how the digital format has changed his job, the pros and cons that come with it, and we all agreed that there’s something about a celluloid experience that’s missing from it. 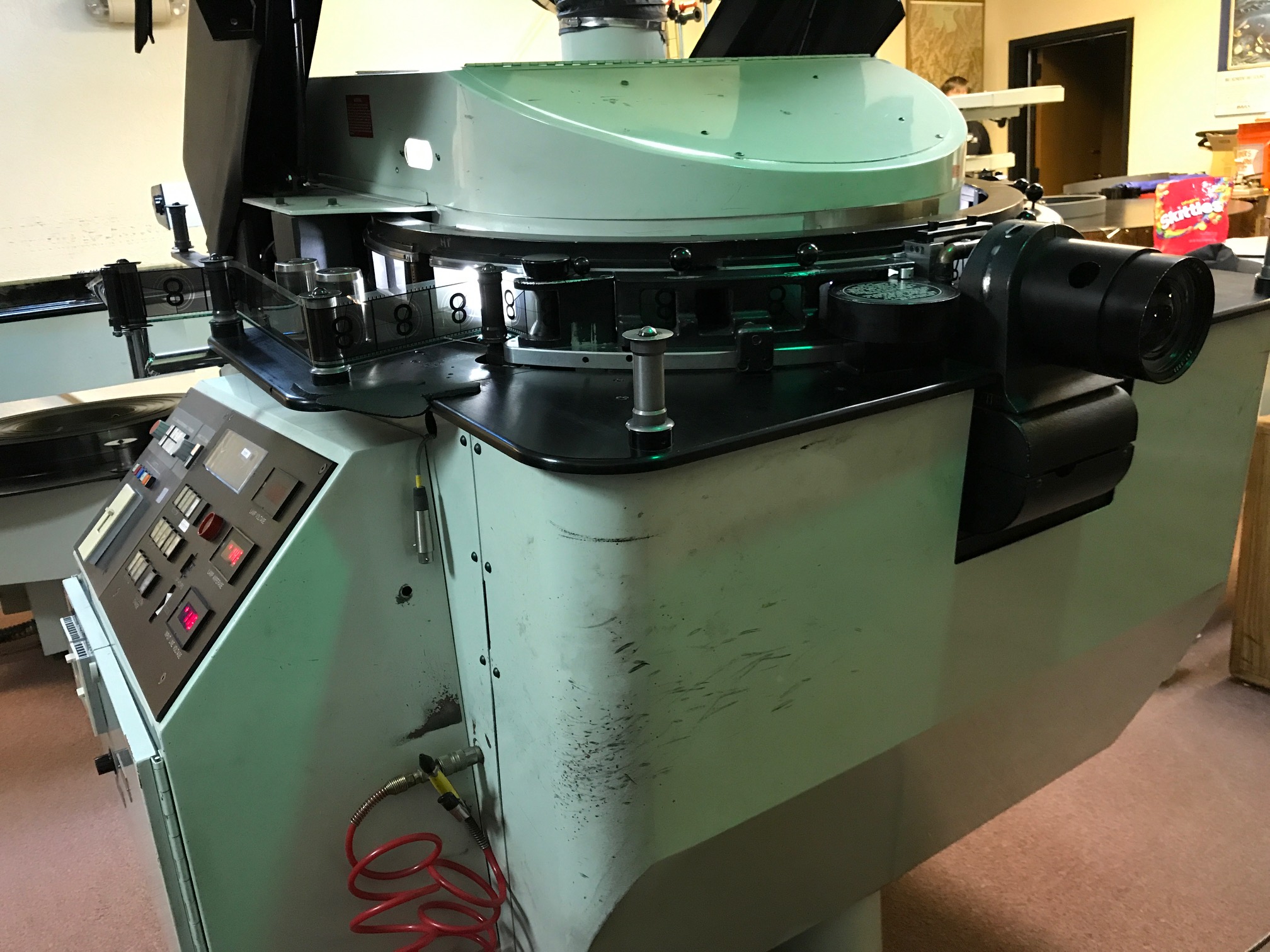 Gary took us up to the booth and showed us the massive beast of a projector that made it all possible. Two projectionists were working to get the film prepped for the first showing, which was just ten minutes away. I didn’t get a chance to speak with either of them, but both were trained by IMAX on how to properly run the equipment. The art of being a projectionist may be dying, but being in this booth reminded me that it’s not dead yet.

With Gary’s work being complete, he joined us in the audience for the showing. We let him guide us to the best seats in the house, the location where the sound should be at it very best. And then it began. 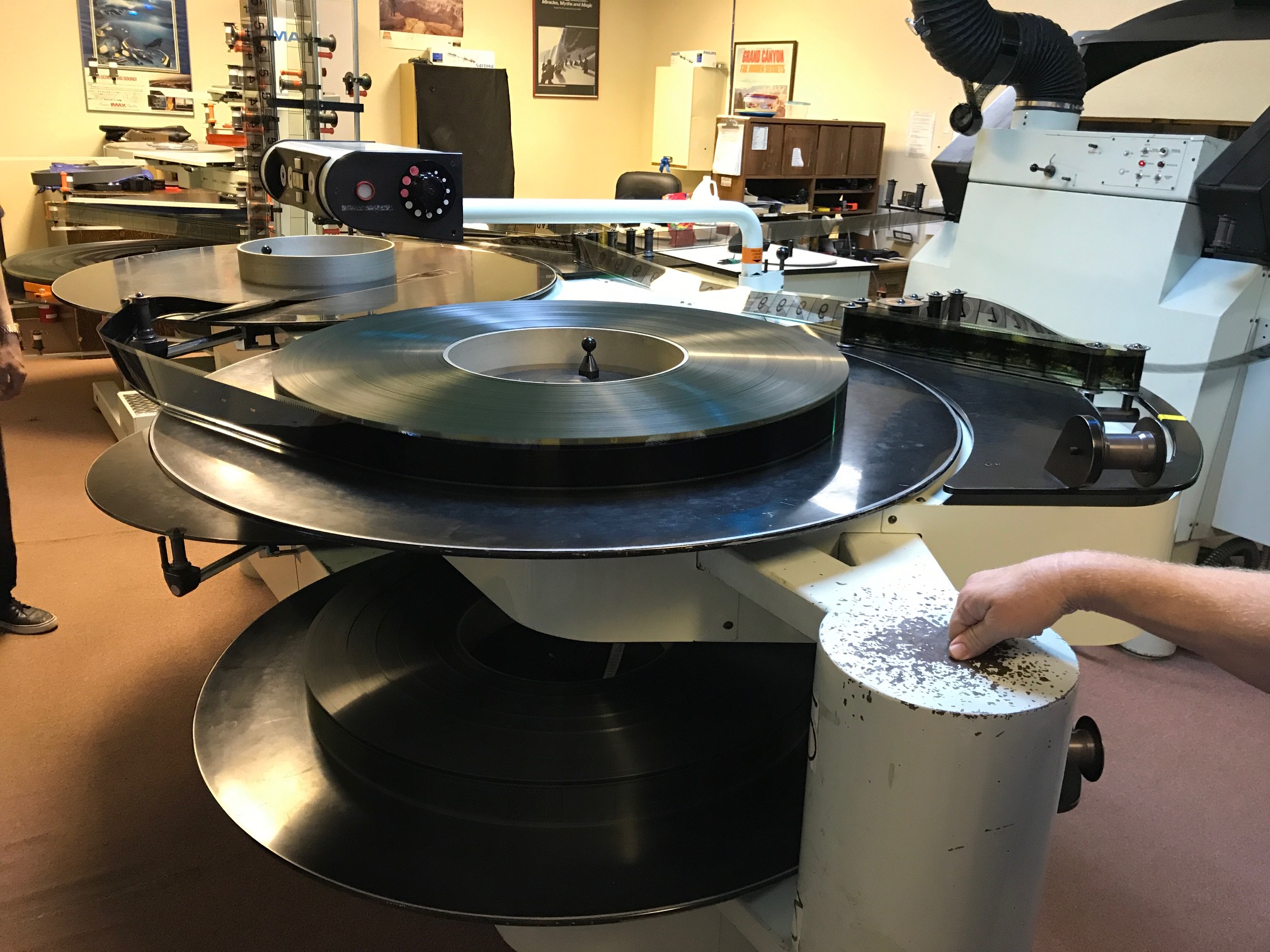 Some people have beef with Christopher Nolan’s preferred alternating aspect ratio format. With ‘Dunkirk’ going back and forth from 70mm IMAX to 65mm film (albeit less than ‘The Dark Knight Rises’ or ‘Interstellar’), the picture jumps from one shape to another periodically. The shifting around has never been problematic for me, but when I screened the film in Salt Lake City, each jump caught my attention and made me consciously aware of the change. That’s the first of two complaints I have with the digital IMAX release. The digital IMAX screens simply aren’t large enough to put that in your peripheral vision. Slightly bigger than standard screens, there’s no way to make those big jumps not catch your attention. Unless you have tunnel vision, it’s going to happen every time. During the 70mm IMAX showing, I found this to be far less of a distraction. A couple specific instances made me notice it, but with a screen so large, I felt like I sunk into it with more ease.

Nolan and cinematographer Hoyte Van Hoytema achieved some very cool and impressive shots in ‘Dunkirk’. They really know how to use the grand IMAX format to maximize the viewing experience. I was exhausted following my first screening due to the high amount of non-stop tension in the film. The visuals take a great deal of credit for pulling that off.

Watching the film in digital IMAX filled the movie with moments that made me say “Wow” out loud – such as the first cockpit shot of Tom Hardy flying over the ocean. However, the 70mm IMAX took the experience a step farther. Instead of instinctively pulling back and saying “Wow,” I found myself leaning and tilting with the bank of each Spitfire plane during the dogfights. As a ship would start to roll after being hit by multiple bombs, I found myself rolling too. With IMAX cameras mounted to everything in the film, the 70mm experience fully immerses you in the world.

There was something extra cool about watching and listening to the film while sitting next to the man who just fine-tuned the system. Each time an effect knocked my socks off, I wanted to look at Gary and nod my head in approval.

At home, my top two audio demo discs are ‘The Dark Knight Rises’ and ‘Interstellar’. Each is so jam-packed with perfect audio usage that I truly think that it doesn’t get any better. ‘Dunkirk’ is right up there with them. The mixing is so integral to the experience that it’s just as important and effective as the IMAX visuals.

My second complaint with the digital IMAX release of ‘Dunkirk’ comes from the audio. When I screened it in digital, I found the same problem that I experienced with ‘Interstellar’ – the music (which runs for almost the entire duration of ‘Dunkirk’) and effects mixes were so heavy that dialogue got buried. With ‘Dunkirk’, I estimate that I only understood 25% of the dialog from the digital IMAX screening. Fortunately, the 70mm IMAX corrected that. I understood approximately 80% of the dialogue from the print showing. The dialogue rang out with more clarity and precision, allowing it to overcome the loud music and effects.

The effects mixing in ‘Dunkirk’ is painful and delightful at the same time. Any time that bullets hit a metal surface, a punching and piecing sound drills right into your head. It’s startling each time it happens, which I imagine is exactly as it would be if you were really there. That was the case with both the digital and 70mm viewing experiences. However, National Geographic’s IMAX theater is aging. It seemed to lack the chest-thumping punch that also accompanied the bullet hits when I screened the movie digitally. After the 70mm viewing, Gary explained to me that the older theater wasn’t outfitted with the newer subwoofers that create that resonant thump. The high-end effects – like the screaming airplane engines – were still intact, but the low-end wasn’t as impactful as it could have been. This likely won’t be the experience in all 70 mm IMAX theaters, but it’s something to consider if your local one is an older theater.

Unless something is botched during the home video conversion, I’m certain that ‘Dunkirk’ will join the other Nolan demo discs.

‘Dunkirk’ is a film that demands to be seen in the largest format possible. I couldn’t imagine seeing it on anything smaller than a LIEMAX screen. My original digital IMAX screening was excellent, but seeing the movie on 70mm IMAX kicked it up several notches. The 1,000+ mile road trip, the expenses and the burned vacation days were absolutely worth it. The experience is one that I will never forget and, considering how rare celluloid releases of this scale are, possibly one that I’ll never be able to replicate. I definitely walked away saying more than, “I saw ‘Dunkirk’ on 70 mm IMAX and all I got was this shirt.” 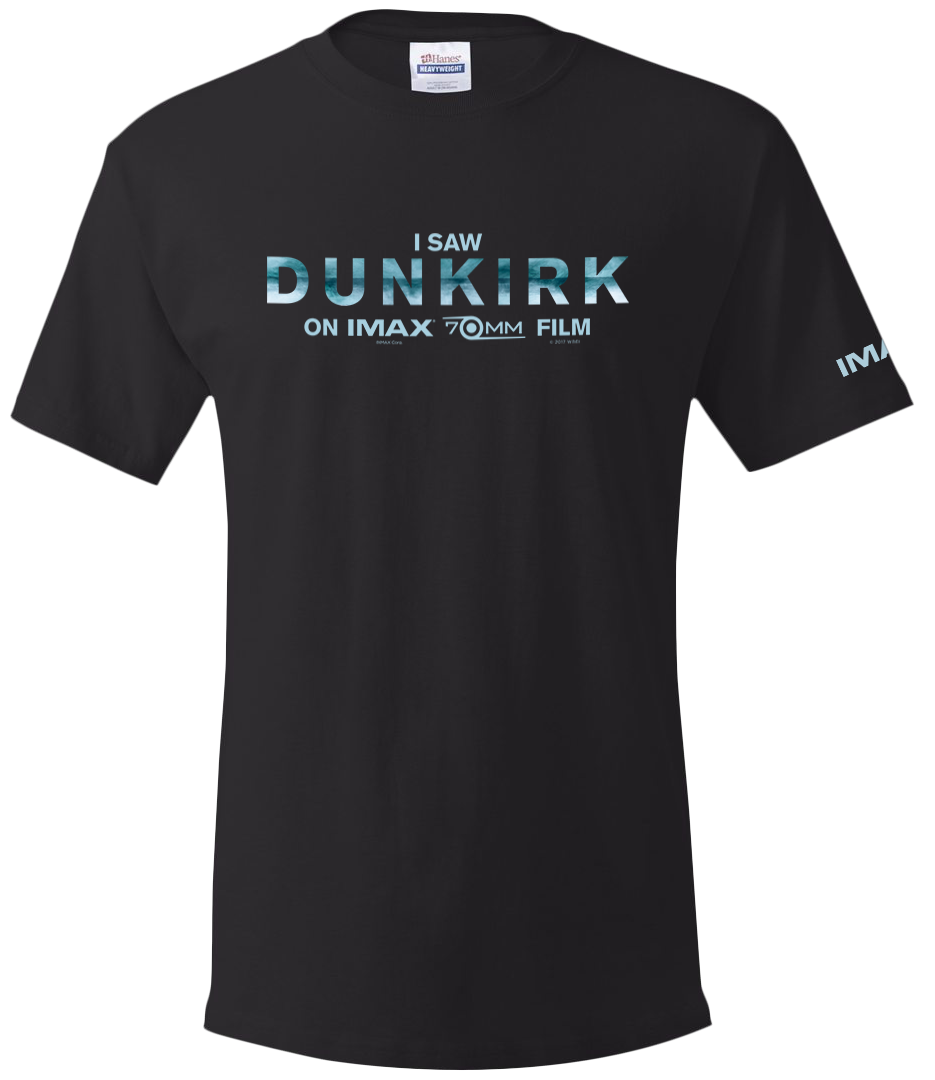