Most people who saw ‘Get Him to the Greek‘ came away with one thought (after: “This movie was supposed to have a plot, right?”). That thought was that Jonah Hill is a very funny man. And you wouldn’t be wrong to think that. The movie’s biggest strength was that it was anchored by three genuinely compelling comedic talents (the other two being Russell Brand and P. Diddy), even if the narrative flopped around all over the place. Hill showed a greater degree of depth than he had before (usually playing the inept goofy sidekick) with his portrayal of a man who knows what he wants but is too scared to actually go for it. But that was just a warm-up for his greatest performance yet, in this week’s awkward indie comedy ‘Cyrus.’

The premise of ‘Cyrus’ is fairly straightforward. So straightforward, in fact, that you could see it getting affixed to a mainstream Hollywood comedy or even a television sitcom. John C. Reilly is a lonely freelance film editor whose wife (Catherine Keener) has left him. He longs for a relationship but is too clumsy and goofy to actually snag anybody. At a friend’s party, after striking out with a bunch of women, he makes the decision to throw caution to the wind and start a one-man sing-along to the song “Don’t You Want Me” by the Human League. (One of the greatest pop songs of all time, by the way.) He encourages Marisa Tomei to join him, and together they dance and sing. She likes John C. Reilly and they sleep together, but she bolts from his house first thing in the morning.

Our favorite ‘Step Brother’ is confused. Is she running away to her husband? Does she have a secret identity? Does she really not like this lovable oaf?

None of the above, it turns out. Rather, she lives with her grown, twenty-something son Cyrus (played by Jonah Hill). They have an inappropriately close relationship that Reilly is forced to puzzle out.

So far, so sitcom, right?

But wait. It gets weirder. 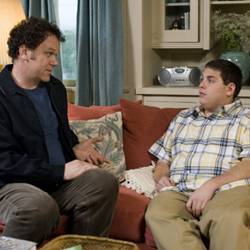 Or maybe it doesn’t get weirder, but the way that it’s written-and-directed by Jay and Mark Duplass, things seem infinitely stranger and more twisted than they’re ever explicitly revealed to be. The brothers, who cut their teeth defining the “mumblecore” movement in independent cinema, imbibe every scene with an almost dangerous level of hilarious awkwardness. The movie kind of drifts along, with a rivalry forming between the two men that begins innocuously enough until becoming outright nasty. Reilly, in a touching performance that is, like the film, at times sad and incredibly funny, is a guy who you’re really rooting for to find happiness. So you’re wishing Jonah Hill will fail. But he’s an interesting character too – a fatherless, post-millennial loser. There’s an unexpected amount of subtlety in Hill’s performance, which is one of the many ways you’ll be kept off balance by the movie.

The Duplass brothers actively work (and often succeed) in making things slightly but noticeably off. They film the movie with little micro-zooms that zero in on a moment for no discernible reason. They also doggedly refuse to give into the tropes of this kind of “rivalry” comedy. That’s actually one of the movie’s biggest accomplishments, but could be seen as a disappointment to some audiences. There’s certainly a moment that gets heated, but it never really explodes like it should, or at least not in the ways that we’ve been trained to expect. (The other disappointment is that the usually stellar Tomei is marginalized to the point that she may as well be a chew toy for these two slobbery dogs to fight over.)

Ultimately, the movie is a success, if only because it’s a comedy that actually makes you, you know, feel stuff. The situation seems impossible, things get almost unbearably awkward, but there’s a real heart at its core, one that you can identify with, even if you don’t want to.