While writing an article about Olympics-related movies, I recently discovered a gem. Did you know that Dolph Lundgren starred in a fantastically cheesy movie called ‘Pentathlon’? He plays a German Olympic athlete who defects to the United States and causes an international incident of epic B-movie proportions. After finding this, I had to spend the next 90 minutes watching ‘Pentathlon’ in ten terribly recorded segments on YouTube. This discovery gave me the idea for a blog topic I’ll call Cinematic Association, which will be a free-flowing stream of ideas, thoughts and general cinematic insanity. 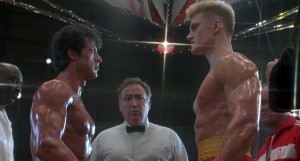 I was just a kid when I saw the towering Lundgren for the first time. I had no idea that people could have so many muscles bulging beneath their skin. When he stood next to Rocky Balboa and uttered the words, “I will break you,” I genuinely felt terrified for my beloved fictional boxing hero. As adults, we’re used to the “Everything turns out great in the end” formula, but as children, it’s easy to forget that most movies have happy endings. When Rocky stepped into the ring with Ivan Drago, I trembled. Drago had just killed Apollo Creed. I remember this as the single most affecting movie plot twist of my young movie-watching life. Apollo Creed was dead. How could that be? Good guys didn’t die like that! Drago wasn’t a normal bad guy; he was a monster!

Naturally, I thought the shorter, outmatched-in-every-way Rocky was doomed. I had no idea how he’d even hit Drago in the face. I kept picturing a comical fight in which Rocky had to jump up like Little Mac just to hit Drago’s head – a thought that always ended in tragedy. Drago was an imposing figure. Lundgren’s murderous face haunted my dreams.

‘Rocky IV’ was Lundgren’s second movie. After that, he went on to star in one awesomely terrible action flick after another. His filmography reads like a list of the world’s greatest direct-to-video hits. Still, there’s something about Dolph. Whenever he’s in a movie, it inspires equal parts terror and “Aww, isn’t it cute to see him in something again?” thoughts. Dolph is a cinematic enigma.

Fun Dolph Fact: Did you know that Lundgren is not only built like a steroid-pumped super villain, but he’s as smart as one too? He has a Master’s degree in chemistry and received a scholarship to MIT. It’s hard to imagine anyone as visibly imposing as Dolph Lundgren playing the part of a chemist, crushing beakers simply because they come into contact with his biceps. Not only is he terrifyingly smart, he’s also a world class karate competitor. There’s a reason why he always played the big, dumb, Apollo-Creed-killing oaf. If he ever tried to play a movie character that big, that deadly, and that smart, we’d simply laugh and say, “Yeah, that’s believable! Psssh!” He’s a real-life James Bond villain.

As I got to thinking about Dolph Lundgren’s impact on my young life, I started to think about his film career too. According to IMDb, he’s been in 50 movies (five of those are listed in various states of production) and one television episode. Yet even with all of those films, he’s been in only a handful of recognizable titles, such as ‘In the Name of the King’, ‘The Expendables’ or ‘Universal Soldier’. The rest of his movies have great direct-to-video names like ‘Silent Trigger’, ‘Jill the Ripper’ or ‘Fat Slags’ (a movie that I’m determined to see; the title is too great to turn down, and I’m dying to see what a movie like this does with a relative genius).

I haven’t seen a third of the Dolph Lundgren movies listed on IMDb, and I plan to rectify that, but I’m a little apprehensive. Hold that thought.

In order, these are top five Dolph Lundgren movies that I simply must see, along with their plot synopses (none of which I made up, but I wish I had):

Synopsis: ‘Fat Slags’ charts the rise and fall of our eponymous heroines, who are unrepentantly vulgar and crass. Leaving their hometown of Fulchester in the North of England, Sandra and Tracey head for the bright lights of London, shagging and boozing their way to fame and fortune. Sean Cooley, an internationally renowned billionaire, suffers a blow to the head, rendering him temporarily insane on the day. The Fat Slags arrive in London. Spotting them on a popular daytime TV chat show, he falls in love with their larger than life look and approach.

Why I Need to See It: Did I mention the part of billionaire Sean Cooley is played by Jerry O’Connell? Good golly, this movie is far too good to pass up. I’ve always wondered if actors keep home video copies of all the movies they’ve been in. Where do you think Jerry O’Connell keeps his copy of ‘Fat Slags’? If a man that starred in ‘Fat Slags’ can be married to Rebecca Romijn, I guess there’s hope for us all.

Synopsis: Captain Matt Hendricks (there aren’t many movies where you’ll see Lundgren have such a plain, American character name) and Dr. Linda Christian are locked in a submarine with Russian terrorists that threaten to launch a chemical virus on U.S. territory.

Why I Need to See It: A chemical virus is about to be launched at the U.S., and Dolph is the only one who can stop it. What are the odds that he defeats the entire terrorist plot with his brawn, while the film fails to take advantage of his real-life chemistry expertise?

Why I Need to See It: I stopped at “Warchild” because that’s all I need to know. Dolph Lundgren plays a mercenary named Warchild. Was there ever more reason to see a movie than that?

Synopsis: New York, Christmas Eve, 1999. At the dawn of the new millennium, a subway construction crew unearths an eight hundred year-old Celtic skeleton and a mysterious key. News of the discovery reaches a Middle East monastery where the warrior monks known as the Knights Templar – an ancient sect entrusted to protect holy relics – choose their best pupil, Lukas (Lundgren) to face the diabolical threat.

Why I Need to See It: Now he’s a member of the Knights Templar? It’s too good to be true. This brings up another thought: At what point will Dolph Lundgren beat the crap out of Robert Langdon and his mullet? Soon, I hope.

Synopsis: A tough guy goes undercover on a personal mission of vengeance into the hardcore world of S&M, to find out who’s responsible for the death of his brother. 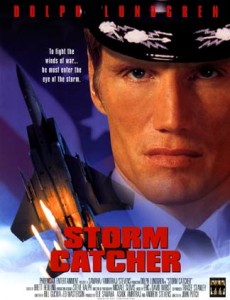 Having written over a 1,000 words on Dolph Lundgren, I find myself back at the beginning, thinking back on his appearance in ‘Rocky IV’. His physical presence scared me more than any horror movie ever could. His career started out so promisingly, by playing one of cinema’s most memorable villains, and then came the B-movie roles. Dolph never looked back.

Dozens of movies later, and Dolph is still wallowing around in movie obscurity hell. The question is: Will a marathon viewing of some of what I assume are his cruddiest movie roles ruin the commanding presence that Dolph Lundrgren held over me as Ivan Drago? Will his other terrible movies kill the Drago mystique? Will they render that great role as dead as Apollo?