Paramount Home Video today officially announced plans to bring John Carpenter and Kurt Russell's Escape From L.A. to 4K Ultra HD Blu-ray. Almost two years ago Scream Factory punched out their excellent Collector's Edition Blu-ray, well now you'll have to grab it again to keep that Carpenter collection alive and well. This makes me wonder when we can expect Event Horizon to get a similar visit on 4K disc... 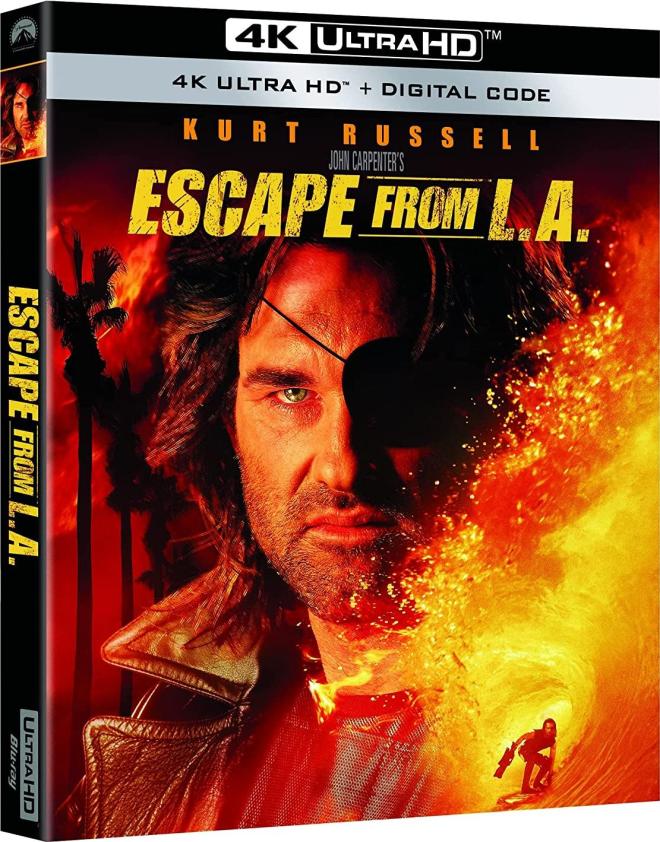 The press release indicates that this one will get a Dolby Vision pass and offer DTS-HD MA 5.1 audio. But before you go selling off your Scream Factory discs, it looks like this is going to be a barebones release. The only listed bonus feature in the PR was a trailer. We've reached out to our PHV contacts to verify that end. While not the best Carpenter film ever, I'm glad to see it coming to 4K Ultra HD Blu-ray. It's very 90s and I feel it has a pretty good tongue-in-cheek sense of humor about big blockbuster action movies of the era.

Escape From L.A. - 4K Ultra HD Blu-ray is up for Pre-Order now on Amazon, no sign or word of any kind of retailer exclusive packaging, but if that changes we'll let you know.

Thanks again for your pre-orders. They really do go a long way towards keeping our little operation up and running.

DIRECTED BY JOHN CARPENTER, THE EXPLOSIVE CULT-CLASSIC ARRIVES ON
4K ULTRA HD FOR THE FIRST TIME

Snake Plissken is back in the high-octane thrill-ride JOHN CARPENTER’S ESCAPE FROM L.A., arriving on 4K Ultra HD for the first time ever February 22, 2022 from Paramount Home Entertainment.

Released in 1996, JOHN CARPENTER’S ESCAPE FROM L.A. was the highly anticipated follow up to the fan-favorite hit Escape from New York.  Kurt Russell returns as anti-hero Snake Plissken, who is called upon to save the world from a doomsday device after a 9.6 quake levels most of Los Angeles.

The 4K Ultra HD release features exceptional picture quality with Dolby Vision and 5.1 DTS-HD Master Audio. The disc also includes access to a Digital copy of the film and the original theatrical trailer.