From September 4-9 in Berlin, the world's top consumer electronics manufacturers all gathered together for the IFA 2015 tech show. Like CES, the European tradeshow highlights some of the most exciting new and upcoming home theater gear products and HD gadgets.

From Ultra HD televisions and 4K projectors, to premium headphones and Hi-Fi speaker systems, this year's event showcased plenty of buzz-worthy items that should have tech enthusiasts drooling with anticipation. Now that the show has come to an end, here's a full breakdown and analysis of all the big stories that broke last week, along with video reels straight from the show floor.

The BDA finally completed the Ultra HD Blu-ray spec back in May and Panasonic even showed off a "prototype" player at CES (it was basically an empty plastic box), but concrete details on hardware, titles, and release dates have been few and far between. Thankfully, Samsung and 20th Century Fox have decided to peel back the curtain just a bit. Though pricing is still a mystery, at IFA 2015, Samsung revealed its first Ultra HD Blu-ray player along with the first crop of Ultra HD Blu-ray titles from Fox. 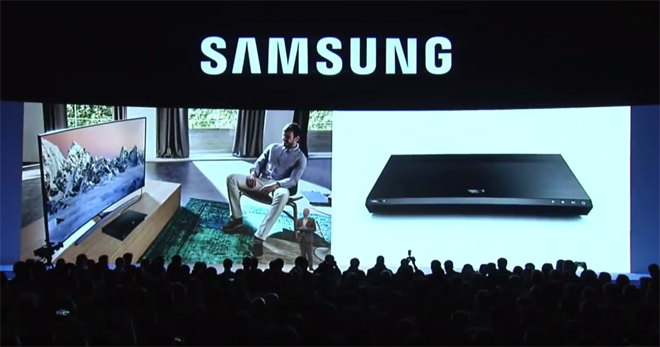 The Samsung UBD-K8500 features a sleek, curved design to complement the company's curved-screen TVs. The device will support playback of Ultra HD Blu-ray discs at a resolution of 3840x2160 along with support for expanded color gamuts, high dynamic range, high frame rate content, Samsung's smart hub, multi-room link, and object-based audio tech like Dolby Atmos and DTS:X. In addition, future Samsung Ultra HD Blu-ray player models will also include support for the format's "Digital Bridge" feature, allowing customers to side-load content off of their discs and onto other devices.

On the content front, 20th Century Fox declared their full support for Ultra HD Blu-ray, and announced plans to release all of their new titles on Ultra HD Blu-ray at the same time as their standard Blu-ray and Digital HD releases next year. Likewise, the studio will be authoring all of their discs in HDR (high dynamic range), providing enhanced levels of brightness and contrast to create more realistic highlights and shadow detail on supported displays. 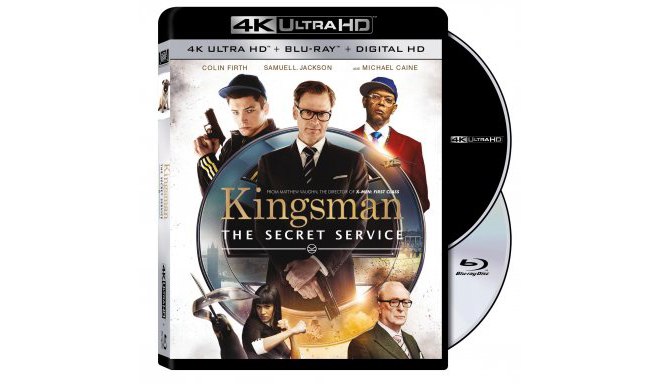 The initial crop of Fox Ultra HD Blu-ray titles will include: 'Kingsman: The Secret Service,' 'Exodus: Gods and Kings,' 'Fantastic Four,' 'X-Men: Days of Future Past,' 'Life of Pi,' 'The Maze Runner' and 'Wild.' However, as exciting as this announcement is, it should be noted that according to IMDB many of these films were not actually shot or completed in true 4K resolution. With that said, should these movies simply end up upscaled to Ultra HD, the format does still offer other picture quality benefits besides resolution, including HDR and 10-bit color depth.

Sadly, despite early indications, it looks like the format will not hit stores in time for the 2015 holiday season, as Samsung's UBD-K8500 Ultra HD Blu-ray player and Fox's first Ultra HD Blu-ray titles are both scheduled for release in early 2016. Damn, there goes half of my Christmas wish list!

With both companies now firmly marking their 4K territory, these announcements should help pave the way for more Ultra HD Blu-ray details from additional studios and manufacturers, bringing some exciting 4K content altnernatives to the current crop of compressed streaming services.

That's right, the display industry has a fever... and the only cure is a higher dynamic range! After making a splash at CES, HDR technology is continuing its sweep across the TV landscape as more and more manufacturers are releasing new high dynamic range models and firmware upgrades. For the uninitiated, HDR is a content grading and display process that provides more intense brightness and contrast levels on supported titles and TVs, resulting in superior highlights and shadow detail.

During IFA 2015, Samsung announced the release of a free HDMI 2.0a firmware update for its 2015 Ultra HD and SUHD lineup. With HDMI 2.0a support, these displays will now be able to play HDR content from internal and external sources, including streaming services and upcoming Ultra HD Blu-ray players. Check out the above video for a tour of Samsung's IFA 2015 booth!

Not wanting to be outshined (literally) by Sony and Samsung's displays, LG unveiled some HDR news of its own, announcing the launch of high dynamic range streaming on its OLED Ultra HD TVs through Amazon Instant Video. LG HDR support was recently added to the 65EG9600 and 55EG9600 curved-screen OLED HD TVs through a firmware upgrade, and can also be found on the upcoming 65EF9500 and 55EF9500 flat-screen OLED Ultra HD TVs. Currently, Amazon is offering the first season of its original series 'Mozart in the Jungle' and 'Transparent,' along with the pilot episode of 'Red Oaks' in the HDR format. Check out the above video for a look at LG's IFA 2015 OLED lineup!

Since the sad demise of Panasonic's beloved plasma line, home theater enthusiasts have been waiting for the company to announce a worthy successor to that defunct technology. Well, at IFA 2015, the manufacturer may have finally done just that. Following in LG's footsteps, Panasonic is now ready to release its very first large-screen OLED display. With its emphasis on picture accuracy and premium features, the TX-65CZ950 is poised to become one of the industry's top display models.

But what really makes the set so special -- and what might give it a notable leg-up over LG's already impressive offerings -- is Panasonic's commitment to picture accuracy. The TX-65CZ950 uses a specially modified professional-level 4K Studio Master Processor, and offers THX certification and a "True Cinema" picture preset fine-tuned by leading Hollywood colorist Mike Sowa to ensure an accurate picture that stays true to the director's original intent. For more information about the company's OLED 4K Pro philosophy and manufacturing process, check out the above and below videos!

Though an exact release date and price point have not been revealed yet, Panasonic's TX-65CZ950 will bring some much needed competition to the OLED market, which will hopefully help to bring down retail prices and improve performance. With LG once again reiterating its commitment to the impressive panel technology, and Panasonic now joining the fray, it looks like OLED might finally be making some important steps toward becoming the TV display standard of the future. Likewise, it looks like I might finally have a compelling reason to upgrade from my current Panasonic plasma!

Beyond TVs, IFA 2015 also brought some notable projector news, including new 4K models and mobile solutions. On the portable front, Lenovo is releasing the new 10.1-inch YOGA Tab 3 Pro. In addition to some impressive specs, the tablet actually offers a built-in 70-inch projector for mobile big-screen entertainment. The device is set to launch in November for $499.

Finally, the VPL-HW65ES is Sony's new Full HD projector with a 120,000:1 contrast ratio. Prices haven't been revealed yet, but all three will hit stores in October, offering some compelling options for those who feel a 65-inch TV just isn't big enough to truly show off Ultra HD content.

Of course, display technologies weren't the only highlights at IFA 2015, as there were plenty of great audio products announced as well. Sony and Panasonic both revealed several new home audio devices with an emphasis on high-resolution playback and fidelity, including premium headphone models and more Technics branded components.

For its part, Sony detailed the new h.ear (pronounced "hear") on headphone lineup, with over-the-head and in-ear models available in several bold color choices this November. Likewise, the company revealed two upcoming Walkman models set for an October release, and the CAS-1 compact sound system. All of the products include high-res audio support.

Finally, Panasonic unveiled several additions to its high-end Technics audio lineup, including a pair of audiophile headphones due out early next year. In addition, the Technics brand will also be home to the new SU-G30 Network Audio Amplifier, ST-G30 Music Server, and OTTAVA SC-C500 HiFi System, providing more premium audio solutions for customers with a bit more cash to spend. Once again, all of the new products will include high-res audio support, continuing the industry's push away from compressed audio formats like MP3.

Thanks to some tantalizing previews of several exciting home theater products and technologies, IFA 2015 proved to be an eventful show. Ultra HD Blu-ray, high dynamic range, OLED, 4K projectors, and high-res audio gear are all paving the way for innovation in the consumer electronics industry, offering some exciting possibilities for customers.

For now, what do you think about the show's major announcements and products? What gear items and upcoming tech are you anticipating the most? Will you be investing in any of these new products and formats? Let us know your thoughts in the forum!