While most can agree that Ultra HD TVs provide a beautiful picture, all those extra pixels are meaningless unless you actually have some 4K content to play. The arrival of Ultra HD services and media players has been slow, but Ultra HD streaming and on-demand options are finally starting to take off, bringing a growing collection of 2160p titles to hungry 4K TV owners.

But just what 4K services are available now, and on what brands and devices do they work? And what Ultra HD content is out there to watch and how much is it going to cost? We've broken down all of the current 4K platforms and players along with details about title selections, costs, and compatibility. So, without further ado, we present High-Def Digest's Guide to 4K Ultra HD Content & Devices!

One of the most comprehensive 4K content solutions currently on the market is Sony's FMP-X10 set-top box. The device connects to a compatible Ultra HD TV via HDMI and allows users to download and store 4K movies and TV shows from Sony's Video Unlimited 4K service. The player also includes a 1TB hard drive that can store about 20 downloaded Ultra HD movies, access to Netflix 4K streaming playback, and TRILUMINOS expanded color support.

Cost: Suggested retail price for the player is $699. 24 hour rentals start at $7.99 and purchases start at $29.99. In addition, the service includes access to over 50 free short films, documentaries, music videos and sports videos.

Compatibility: Though Sony originally intended its player to only support Sony branded TVs, the manufacturer now states that the device will work with other brand displays that include HDMI 2.0 connections with HDCP 2.2 copyright protection as well.

This is Samsung's proprietary Ultra HD hard drive. The CY-SUC10SH1 UHD Video Pack connects to a user's Samsung Ultra HD TV via USB 3.0. The device features a 1TB hard drive that comes pre-loaded with 4K titles and offers the ability to download 4K media from the M-GO service. 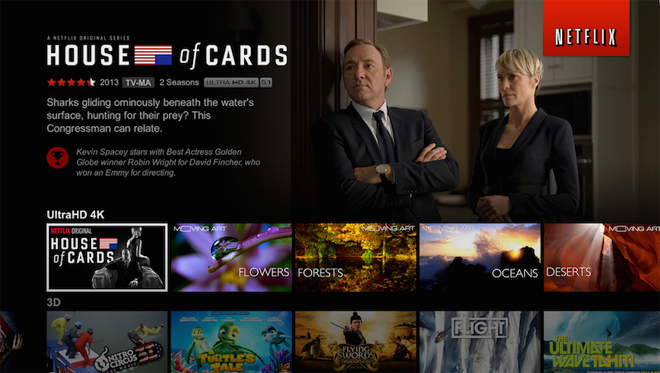 The popular streaming service now offers a slim but growing collection of Ultra HD content. In order to stream 4K titles, the platform uses the H.265/HEVC codec at about 15.6 Mbps. The company recommends that users have an internet connection of at least 25Mbps to watch Ultra HD streams.

Compatibility: Netflix 4K playback is available through the Netflix app on Samsung, Sony, LG, Panasonic, VIZIO, Sharp, and Toshiba brand Ultra HD TVs that include support for the HEVC codec. For a full list of supported televisions, click on your brand above and look for the models that have Ultra HD listed under resolution.

Not content to be outdone by rival service Netflix, Amazon has also recently entered the world of 4K streaming. The company allows all customers to buy titles from a respectable collection of Ultra HD movies and also offers a selection of free 4K content to Amazon Prime subscribers.

Title Selection: Movies available to buy include 'After Earth,' 'American Hustle,' 'Captain Phillips,' 'Elysium,' 'Hancock,' 'Moneyball,' 'The Mask of Zorro,' 'The Monuments Men,' 'The Amazing Spider Man,' 'The Amazing Spider Man 2,' 'The Da Vinci Code,' 'The Patriot,' 'Think Like a Man Too,' 'This is the End' and more. In addition, Prime members can stream TV shows and films like 'Orphan Black,' 'Alpha House,' 'Transparent,' 'Crouching Tiger Hidden Dragon,' and 'Philadelphia' in Ultra HD for no extra charge.

Compatibility: 4K streaming is available through the Amazon Instant Video app on several Samsung, Sony, LG, and VIZIO Ultra HD TV models. For a full list of supported models scroll down to the bottom of Amazon's 4K Ultra HD Guide.

Beyond the likes of Amazon and Netflix, other digital services have also stepped up to offer 4K content. M-GO currently has a growing collection of films and TV shows in native Ultra HD and upscaled 4K. Rentals and purchases are offered with streaming and downloadable options (with the separate Samsung UHD Video Pack). In order to enjoy Ultra HD streaming, the company recommends that users have about 10mbps of dedicated bandwidth.

Title Selection: 4K content includes titles like 'Die Hard' 'Jingle All the Way,' 'The Wolverine,' 'Sin City: A Dame to Kill For,' 'The Giver,' and 'Spartacus Gods of the Arena.' 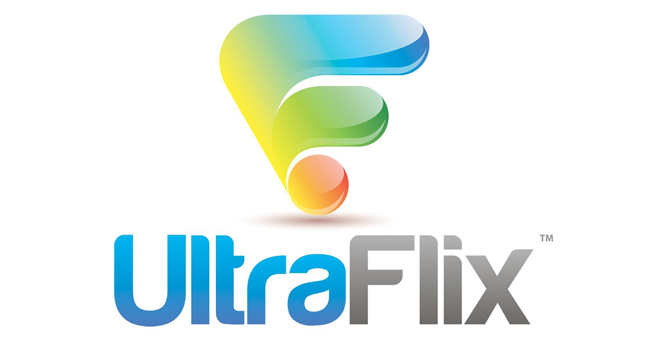 Another streaming 4K option comes in the form of NanoTech's UltraFlix platform. The service now offers more than 500 hours of native and upscaled 4K movies, travel and nature documentaries, sports videos, concerts, TV shows and moving murals. Using the new HEVC codec and NanoTech's proprietary methods, UltraFlix can stream high quality 4K video with a resolution of 3840 x 2160 at less than 8Mbps on supported TVs and the company's own NanoTech Nuvola NP-1 player.

Compatibility: UltraFlix is available on select Samsung, Sony, and VIZIO Ultra HD TVs. Likewise, customers can enjoy the service through any brand Ultra HD TV with the NanoTech Nuvola NP-1.

Looking for a kid-centric 4K solution? Well then, Toon Goggles might be for you. The digital entertainment service offers some on-demand children's programming in Ultra HD resolution.

Outside of the other big 4K subscription, rental, and purchasing services, streaming giant YouTube also allows its users to upload and stream content in 4K as well. The site uses the VP9 codec for 2160p playback.

Title Selection: Besides a few nature clips, promos, trailers, and user generated content there really isn't much here to get excited about yet.

Title Selection: 4K on-demand videos include all three seasons of 'Video Game High School,' the documentary 'A Film About Coffee,' and more.

Cost: Some content is free while on-demand title rentals start out at around $4 and purchases range from $13 to $20.

Compatibility: Vimeo 4K downloads are currently only available on computers.

Though full 4K support is still forthcoming from the cable giant, the company does currently offer an Ultra HD on-demand app for select Samsung Ultra HD TVs. To access the content, Xfinity customers with 2014 Samsung 4K TVs simply need to download the Xfinity in UHD app from the SMART Hub and then type in their Xfinity login information. In addition, Comcast plans to offer their full Xfinity in UHD catalog across Xfinity TV Go platforms for all customers later this year and will soon provide a new 4K X1 set-top box.

Cost: The app is free for Xfinity customers who have a subscription that supports the participating networks. 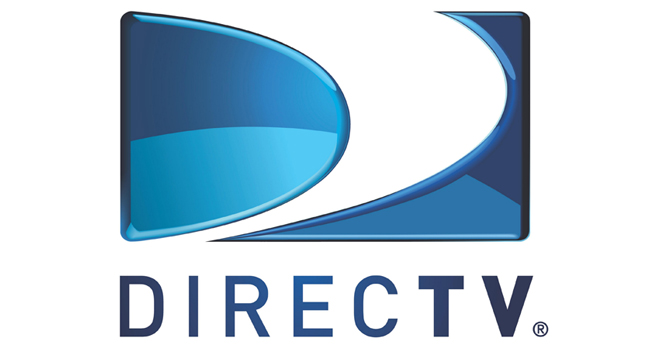 On the satellite front, DirecTV also offers a 4K video-on-demand option. The service is a partnership with Samsung, and is accessible to customers with a DirecTV Genie HD DVR and a supported Samsung Ultra HD TV. The initial lineup of 4K on-demand titles includes nearly 20 popular films and nature documentaries from Paramount Pictures and K2 Communications. 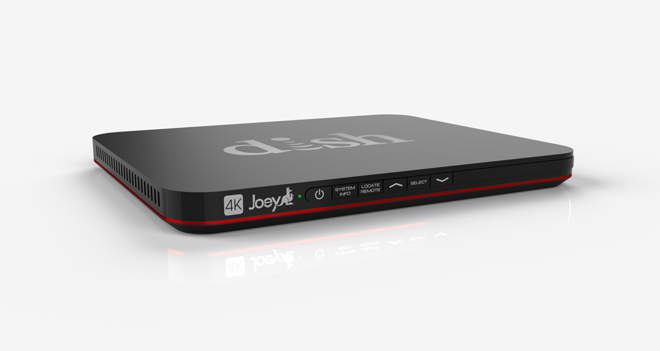 In addition to all of the current Ultra HD options, there are several 4K platforms still on the horizon. First up, is DISH's recently announced 4K Joey Ultra HD set-top box. The device is designed to integrate with DISH’s Hopper Whole Home HD DVR system and will be compatible with most brand HDMI 2.0/ HDCP 2.2-compliant televisions. Exact content has not been announced yet, but the 4K Joey is expected to launch in the second quarter of 2015.

Meanwhile, the most anticipated 4K content option remains Ultra HD Blu-ray. Though the spec is still being finalized, Panasonic recently revealed a prototype player at CES and the format is expected to launch in late 2015 or early 2016. Ultra HD Blu-ray will likely support 4K/60p/10-bit video, High Dynamic Range tech, wide color gamuts, and HEVC (H.265) encoding for playback at a high bit rate of 100Mbps.

Finally, it's likely that Ultra HD won't ever become truly mainstream until live cable/satellite/and OTA broadcasts are made available. Though a timetable for 4K broadcasts has not been announced, several companies have run successful Ultra HD test transmissions and the new ATSC 3.0 standard should make 4K content possible. 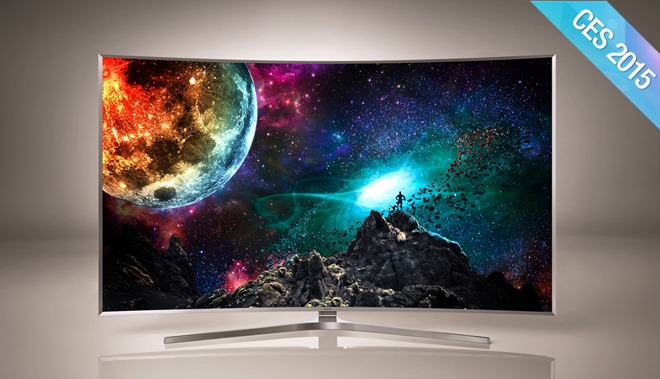 While Ultra HD content services and devices have been expanding slowly but surely, there is still a lot of room for improvement when it comes to title selections and quality. 2015 is poised to be a big year for all things 4K, finally bringing worthwhile material to all those expensive, beautiful displays. For now, though, what do you think about the current crop of 4K services and titles? Which upcoming 4K devices or platforms are you most excited about?