'Pinball FX2' is Out for Xbox One: 'Guardians of the Galaxy' Headlines, 'The Walking Dead' is Coming

'Pinball FX2' for the Xbox One, which saw a mild delay late last month to remedy the abscence of table transfers from the Xbox 360, has officially released on Microsoft's newest console. The 'Pinball FX2' platform is available for free download, with individual tables and packs sold as DLC. The Xbox Game Store still has the game listed for an Aug. 28 release, indicating not even Microsft saw this quick of a turnaround on the needed patch.

Though, according to an FAQ updated today, some people are having problems with the transfer progress, The fix seems simple enough. Head over to Zen's forums if you need the help.

Also in the FAQ post is the list of currently available tables, those that are having technical issues with the transfer proces (and are only available for purchase until the fix is in), those that Zen is still hard at work porting into the Xbox One game and the few that will never make the transfer, having been built on old tech.

Both 'Plants vs. Zombies' and 'Super League Football,' two of Zen's most compelling tables, are still in the works. 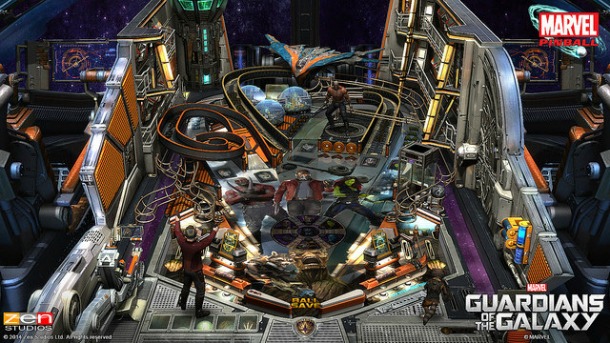 Of the many tables available at launch, 'Guardians of the Galaxy' is the newest, while 'Sorcerer's Lair' is the only free offering. Each individual table costs between $2.49 and $2.99, while packs can be purchased for $9.99. Every table features a free demo.

An abundance of Marvel and Star Wars-themed packs are ready for purchase right now, in addition to packs featuring tables of Zen's original creation.

Perhpas most happily, Zen's as-yet-unreleased 'The Walking Dead' table will release for Xbox One in the same window as every other console, at the end of August. It sounds pretty sweet, especially for those embroiled in the first season's story and characters.

High-Def Digest reviewed 'Zen Pinball 2' very highly for the PS4, which is essentially Zen's 'Pinball FX2' for Playstation consoles. Or the other way around, if that's your preference.