Judging by the Xbox One Beta: 'Destiny' is the Most Important Game of the Year

And it's got nothing to do with the shooting or role-playing.

I like to be inspired by games. I enjoy finding meaning in whatever corner I can, so the things I'm going to say about 'Destiny' might seem dug up or confounded, desperate even, like I want to enjoy a game only under the assumption that it's meant to be enjoyed. It doesn't matter. 'Destiny' is already the best game I've played all year, and it's only in beta.

See what I mean? This article isn't about the finer points, which we covered already, but the finest point of the game.

The Thing that Bungie is Doing With 'Destiny'

The reason it's going to matter in ten years, isn't obvious. Here's the vaguest way to put it: Bungie isn't exploring the ways a player can impact a game, Bungie is fundamentally changing the way a game impacts the player. That means instead of harping over shooting or RPG mechanics, those things the players can feel in their hands as so many games are content to settle for, Bungie's primary innovation must go virtually unnoticed to acquire its intended affect. The driving force of 'Destiny' is the world itself, and not the players within it.

That means when a public event occurs, plummeting a massive and dangerous Noble Devil Walker into the center of a free-roam map, the player won't see other player-controlled characters spawn in to join the fun. No, those players will somehow emerge from the across the way, as if the rumbling earthquake landing of the behemoth shook them, compelled them to act. And yet, from their point of view, they've stumbled upon a battling friendly in need of help. They experience this moment differently, yet everything remains perfectly seamless. It just happened. 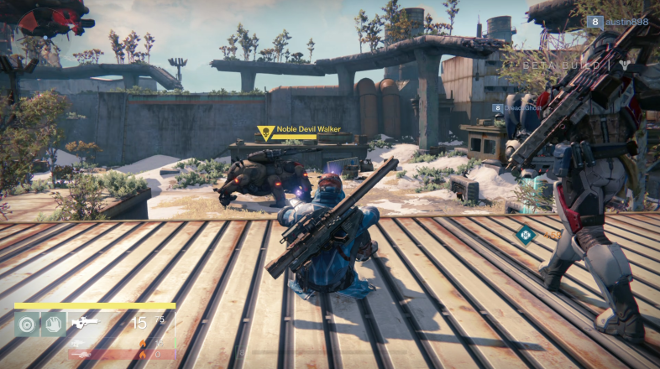 It means when you transition out of a public area and into a mission-focused corridor of intense battles, there's no menu and there's no hassle. You've simply continued on your adventure with the Fireteam you've chosen. The game prevents anybody else from intruding on your experience when the time is right, but promotes that intrusion in the exact moments when an intrusion improves the gameplay. What might seem like a patchwork of shared, closed-off and transitional spaces is a tightly-designed, interlacing, interactive mirage. Before, video games had levels. Now, Bungie is making something completely different.

The vast majority of video games depend upon the player to promote forward momentum. Story missions are chosen one-by-one. Multiplayer progression ticks as you rack up the kills. When cooperation is required, so is the player's effort to cooperate. Then there's 'Destiny's' shared-world, this ongoing meshing of player universes, as the unseen guiding hand devised for the sole purpose of a grand illusion: this world is real. You're in it. It's happening around you, to you and with you.

It's Not Perfect, Of Course

Getting in and out of the beta's earth environment requires a subtle menu navigation. But once you're in, you're in, and the shared-world performs its magic. On the other hand, leveling up your character puts you through an RPG-style ability tree. And the competitive multiplayer, despite Bungie's attempt to tie it into the narrative, sits far away from the true shared world. Hopefully, one day, we'll see all these streams flow into one river. Right now, 'Destiny' is the most massive, most ambitious step in a direction video games can only benefit towards going. 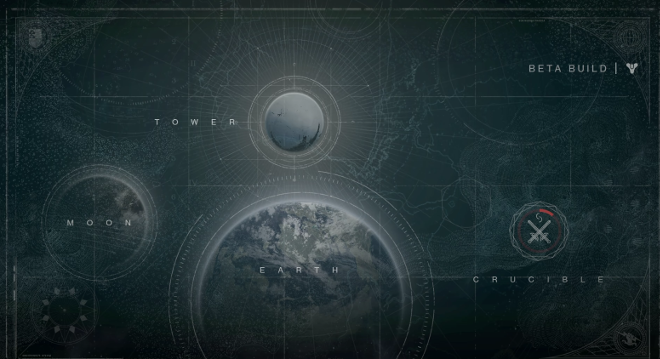 'Destiny' would not exist without the influence of some majorly important turns in gaming. The way players just stumble upon each other is a combination of 'Journey' and 'Dark Souls,' the former a pristine example of seamlessness, the later a litmus test in determining motivation and need. How and when do players interact? To what end does this interaction achieve? For 'Dark Souls,' it was invigorating to find a friendly face among the horrors, but a terror to find an enemy player looking for an easy kill. In 'Journey,' it was surreal. Somebody is out here with me.

In 'Destiny,' it's an epic thrill of battle or a quiet moment of two passing souls in the wilderness. It almost feels like fate, every time. And yes, it's by design. You needed that help when the Devil Walker fell from the sky. The help came. This is profound. This is a 'Destiny.' No game has ever achieved this feeling, because no game has figured out how to accomplish it without showings its cards – a clumsy menu getting into co-op, an Xbox invitation, a scheduled raid. 'Journey' lacked hard-coated purpose in its player interactions, first, but also a massive, highly-experience studio capable of delivering on all those other things games want out of a AAA game.

Balancing this huge, yet invisible innovation with the touchstones and traditions of a massive, first-person shooter extravaganza is noble and risky. A lot of people aren't seeing it, because all they see are the bullets, the bad guys and the super powers. And they've resided to the position that 'Destiny' is generic, even boring, because it doesn't advance shooters in a traditional way. As ridiculous a thing as that is to say, it's true. The expectations for how first-person shooters should advance have always been about visuals, basic gameplay mechanics, the "feel" of the actions you take and the stories told within. From those standpoints, 'Bungie' is certainly a polished, highly successful product, but not necessarily a new product, not something that zings like watching a pilot burst out of a titan for the first time in 'Titanfall.'

In screenshots and short gameplay videos, 'Destiny' looks and plays like 'Halo' and 'Borderlands,' with a soft touch of 'World of Warcraft' in the background. But there's a reason that the very first demo ever shown of 'Destiny' emphasized the shared-space. This is the point. This is the things players can't see, but need to see in order to understand 'Destiny' as a whole. The ironic point to be made is, the better Bungie does at molding these worlds together, the harder it will be for people to see it. The less they appreciate the work, the more they benefit from it, like a psychiatrist coaxing a patient into a non-destructive lifestyle. 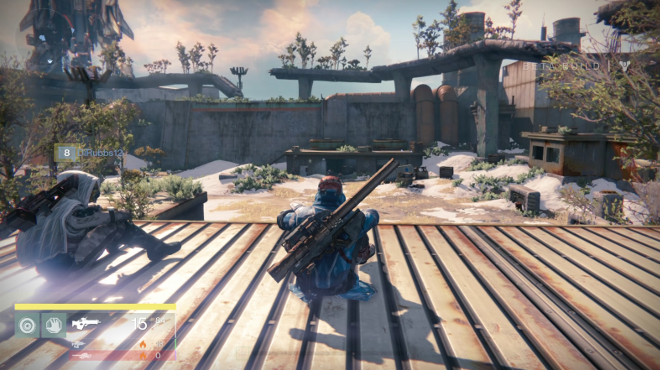 To make room for an innovation like that, however, a big-budgeted behemoth such as this must reserve itself in other areas. It must settle for cliché or expected in the shooting, role-playing and writing, because to risk stumbling in that arena also risks the success of something truly, undeniably new. Unheard of. Unexpected. That's the excuse I'm peddling for Bungie, because I'm a believer in the long-term goal. This beta has shown me something I've never seen before in games. It made me feel something I've never felt through any medium, ever. Whether or not Bungie can extend and maintain the experience through a full package is a completely valid concern. Maybe it only works in five hour bursts. I'm concerned, but I'm completely hopeful.

'Destiny' represents one of the most positive futures of gaming right now, for all of the things about it we cannot immediately see: an utter seamlessness of the game world and the social world, an indiscernibility between your experience and everybody else's, a game impacting a player as effectively and immediately as a player impacting a game.